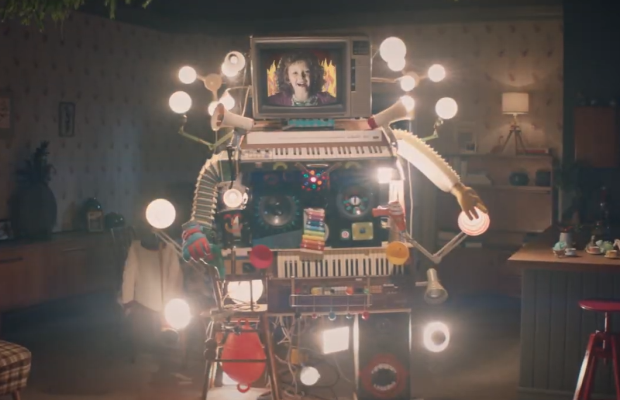 France hasn’t really had it’s ‘John Lewis moment’ when it comes to Christmas advertising. Unlike the seasonal bonanza of heartstring-tugging that the UK ad industry’s been engaging in for the past decade or so, the marketing push on the other side of the Channel still ramps up at this time of year, but it’s largely taken a different tone. “In France, brands usually communicate about offers during the Christmas period because this is the time of the year when people spend more money,” says Fabrice Delacourt, executive creative director at Publicis Conseil. “But year after year, more of them understand that this is a great moment to communicate more on their image, giving their customers a gift through a nice film.”
That is exactly the area that Fabrice and the mobile network Orange have been playing in through their advertising in recent years, from their hilarious tale of neighbourly one upmanship of 2016 to 2017’s captivating airport love story, through to last year’s sarcastic reworking of ‘The Most Wonderful Time of the Year’, aided by the masterful filmmaking of French directors extraordinaire Megaforce. Orange has carved out a space for itself in the festive advertising tradition - one that’s big and attention grabbing, with an irreverent spirit.
This year, Fabrice and his colleagues at Publicis were tasked with injecting that spirit into a new brief: Orange wanted its Christmas campaign to take place around a ‘connected house’, demonstrating how its customers can now control many features of their homes through their smartphones.
“The idea of kids catching Santa came after a great moment of brainstorming,” says Fabrice, when the ‘Got Him’ idea was born. The film would show a gang of children using Orange’s connected house features to devastating effect, catching Santa in the act of his annual delivery rounds and capturing him.
At a time of year when everyone (at least in the cold of the northern hemisphere) wants to hunker down and watch nostalgic movies in the warmth of their homes, the Publicis Conseil team were keen to channel some of those. With the idea of children causing mischief established, the best of ‘80s family cinema was an obvious touchstone. “Our references were adventure movies from the ‘80s like Home Alone, The Goonies, E.T., Super 8,” says Fabrice. “But we wanted our film to take place in today's world, creating a retro-futuristic look, a bit like in the Stranger Things series.”
The music for the spot needed to match its mischievous vibe while still hitting all the right festive notes. So, a punked-up version of Jingle Bells? Yeah, that fits the bill. “From the beginning, when we wrote the script, we had this punk version of Jingle Bells in mind because we thought it would reveal the mood of the children who are part of this gang, ready to do anything to catch the old bearded man,” says Fabrice. “We wanted to have the punk ‘80s sound and spirit.” They set sound producers Boris Nicou and Joël Tessonneau to the task and they served up just the anarchic aural goods the campaign needed.
To make sure the ad was a cinematic treat to fit the seasonal mood, the agency’s script was put in the hands of comedy expert Jeff Low and was produced by La Pac. “He knows how to ingeniously manage actors, he cares about the craft and he has a great sense of humour,” says Fabrice, who loved watching the director working his magic on set. “He’s cool, without pressure, he knows what he wants and he was also very open-minded to our propositions.”
Jeff wasn’t daunted by the big star talent in the ad. He took the prospect of eliciting a performance from the big man in red in this stride. Of course, Santa was a consummate professional, despite having to do his own stunts. “We had to make it feel like Santa was hit by the objects the children attached to the fan, without hitting him for real,” says Fabrice, remembering one of the biggest challenges of the shoot.
Ultimately, it’s not the difficulties that the ECD remembers about creating this raucous Christmas tale. It’s the fun little details that stick with him: “The smaller children acting in the film now think Santa's first name is Gerard, as we called the actor by his first name on the set.”
So big ups to Gerard Claus from everyone at LBB. And good luck at this busy time of year. Watch out for those cunning kids in their high-tech houses.

The VFX Factor: From Feature Films to Advertising with Cody Amos