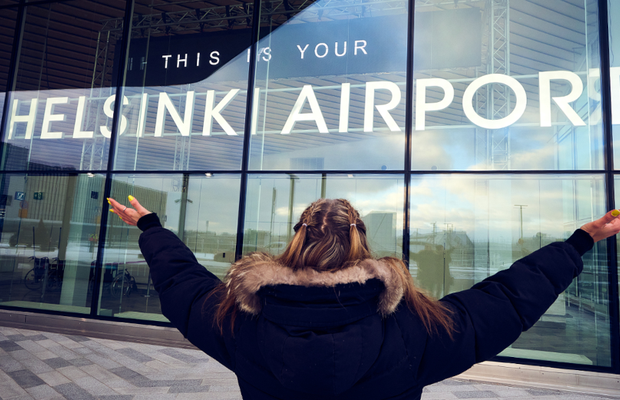 When Helsinki Airport opened a new terminal this year, it could have done what so many others have done and renamed itself after one of the city’s metaphorical high flyers - maybe Linus Torvalds, engineer behind the Linux operating system, Finnish prime minister Sanna Marin, or Ville Valo, frontman of goth-rock band HIM? It didn’t though. Thanks to some clever thinking from TBWA\Helsinki, the airport could now be named after you.
As of now, anyone visiting the airport has the chance to name it after themselves by literally adding their name to the official sign on the airport’s facade.
LBB’s Alex Reeves spoke to Mikko Pietilä, executive creative director from TBWA\Helsinki to find out more.

LBB> Where did this idea start? Was there a brief from Finavia to find a new name? Or was it less specific?

Mikko> Our brief was to come up with an idea that communicates about opening the new terminal as well as opens the discussion with airport customers and gains their trust in the midst of the pandemic. Something to engage the travellers and give them a positive experience. After all, the terminal was built for them.

LBB> What were the early ideas before you landed on this one exactly?

Mikko> Actually, the idea of naming the airport after travellers came to us quite naturally and instantly, since the convention around naming terminals has been the same for ages. How we would break the convention, execute this idea and what the experience could be took some time since structures the likes of airport names are not usually things you can touch.

LBB> What were some of the big decisions in getting to the point where everyone can name the airport after themselves?

Mikko> In this case the big decisions had already been made while determining the brand and its philosophy. The decisions along the way were mostly practical, as the whole idea is very much loyal to the brand itself.

LBB> It feels like a project that keys into the way people look for moments they can personalise and share on social platforms. How did that thinking enter your strategy?

Mikko> Yes, that's what this project is all about. For us it was almost a no brainer as Helsinki Airport has been long known for highlighting customer engagement and experience in terms of marketing and service design. As we were launching a new terminal in the midst of a pandemic our intention was to bring the experience to as many people as possible even though they cannot physically visit the airport. When planning the actual experience social sharing was one of the key factors and we wanted to make the sign as “Instagrammable as possible”.

LBB> In the launch, you said this experience "paves the way towards what modern airport experience is all about." Can you elaborate on that broad philosophical point?

Mikko> Any modern brand experience is about that personal touch and understanding what people are looking for in the context which is your brand or product. In the case of an airport, aside from a smooth pass through, people are gearing up for travel and excited about new adventures that often are passed to others as selfies for social and shared stories. We wanted to give passengers an opportunity to start their adventure with a first in the world custom experience and interaction with the airport. Looking towards the future of immersive experiences such as airports they should and will go towards personalisation and customisation.