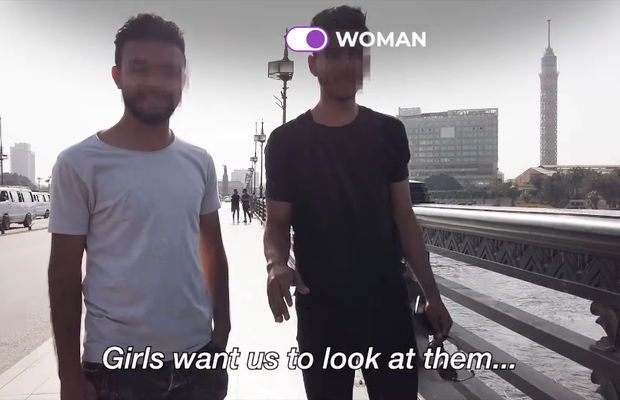 Sometimes, something as simple as a walk down the street can be the start of a woman’s problems. At times it can be subtle and at other times it’s more obvious, but the sexism they face is certainly around them. To highlight this and make men allies, beauty brand Lux teamed up with Wunderman Thompson and the virtual exploring platform City Walks to show men what it feels like to walk In Her Shoes.
The takeover of the mapping service launched in the Middle East with the website showing users what it was like for a woman to walk down the street in Cairo, Egypt. What’s harrowing is that the footage is taken in real-time and the reaction the woman faced as she walked down the road is completely raw. She is told to smile more, subjected to leering looks and quizzed about her personal life, which all too accurately details the casual sexism women face daily.
Not only is this campaign a way forward in starting the conversation to make men allies but it also highlights the power of technology and how something so simple as a walk can be a pivotal point in slowly changing thinking. To hear more about the campaign and the design behind it LBB’s Natasha Patel caught up with Wunderman Thompson’s global business director of Unilever, Hinoti Joshi, Wunderman Thompson’s CCO of Unilever, Marco Versolato and Lux’s global VP, Severine Vauleon.

LBB> What was the initial brief for this project?

Hinoti> This project stemmed from Lux’s Purpose to help women rise above everyday sexist judgments and express their beauty and femininity unapologetically. Earlier in March 2021, Unilever launched a new Positive Beauty vision and strategy globally, which aims to champion a new era of beauty that is equitable and inclusive. We wanted to walk the talk by going beyond campaigns and using content, partnerships and activations to create awareness about how casual sexism can have far-reaching consequences starting with lack of confidence and self-editing and sometimes quickly escalating to harassment and violence. What we aimed to do was to spark a conversation and turn men into allies by giving them the opportunity to walk in women’s shoes.

LBB> How and why was City Walks the perfect platform to showcase sexism?

Marco> We have a very interesting and challenging purpose coming from a strong, universal insight. It’s surprising that even in today’s day and age, women receive casual sexist comments in developed and non-developed countries alike. Why do women get mistaken and harassed for expressing themselves, or simply being who they are? When I saw the City Walks website I thought this was a great platform to use.
The idea fits perfectly with the site’s objective of getting people to experience walking in different cities (in a time when people can’t travel) and similarly, everyone experiences the kind of sexism women actually receive when simply walking on the streets. The power of experiencing it yourself is great because it can really affect how we behave and act on the issue.

LBB> I love how City Walks is a global platform so you can reach a huge audience, with that in mind what has the public response been?

Hinoti> We found a universal platform in City Walks which showcases Experiential Comms x Creativity x Tech. For me, this simple idea using creativity and tech made it easy to actually experience sexism.
On top of the great PR numbers from the coverage, what’s more important is the overwhelmingly positive response to the campaign. We’ve never had a video being shared so many times by complete strangers on many social media sites. Women who saw it commented on how real the experience was for them and it was such a powerful way to get men to experience it and make them a part of the solution by creating allies out of them. Changing how we see and feel can change how we behave and act on this issue. We are very pleased with the positive response and support which inspires us to expand the campaign in the future with many more exciting partnerships and activations.

LBB> Tell us more about the research that went into developing and creating the map.

Hinoti> Delving deeper into the impact of sexist labels on women, a global Nielsen study undertaken by Lux shows that one out of two women around the world have been judged for expressing themselves differently, and 70 percent of these judgements are related to their appearance. This data points to the growing consensus that a lack of confidence and self-editing to silence the critics is a long-term, critically damaging issue.
Despite how rife casual sexism is, most people don’t know it as a problem. Most perpetrators don’t think they’re doing or saying anything wrong, nor are they aware of the impact these comments have on women’s self-worth. The constant barrage of casual sexism has a negative impact on women. One in two women said that it affects their confidence. More than one in three have found themselves questioning whether they should have done things differently.
Casual sexism also sets a cultural norm that leads to more extreme issues like harassment and violence. Post the campaign, qualitative research was done with men who visited the website and experienced walking “In Her Shoes” – and 90% of them said they would be more mindful / think twice before making sexist comments.

LBB> From a UX point of view how was it working with the platform? How easy was it to change each gender and also ensure the local area was accurately represented?

Marco> We talked about the idea with the platform owners, particularly showcasing a walk in two different perspectives – a man’s and a woman’s. This was something new to their existing format which only featured one walk for each city. There were then two key changes done to the UX:
First – the campaign needed to be present on the homepage itself for everyone to see and we added the button “IN HER SHOES”. Upon clicking this, the viewer will be directed to a walk in Cairo, Egypt (that of the man’s walk) and they will see the MAN-WOMAN toggle button.
Secondly, once they click this button to select “WOMAN” they can compare the difference between the walk of the two genders. So it was a simple adjustment on the UX but made a big difference in the message we were trying to get across.
We shot the actual experience of a man’s walk and a woman’s walk in two main busy street areas in Cairo, and true enough as suspected, the woman received several comments about her looks, way of dressing in a span of her 15-minute walk, while the man received nothing during his walk of the same duration. The actual raw footage was then used and we added subtitles in English on the comments the woman received.

LBB> Lux recently worked on the Born This way Campaign and the Female Gaze to really hammer home the argument of gender equality. Tell us more about this.

Marco> Exactly. This shows the consistency we are building for the brand: supporting women to be who they want to be and to express themselves freely even when judgments try to hold them back. Born This Way is a great example of this kind of support and Female Gaze shows how our purpose goes beyond our campaigns, and how we involve and value women throughout the production process.
Hinoti> On Female Gaze, our goal was to consciously remove bias through the creative workflow including in front of and behind the camera in order to drive meaningful and richer stories. As such, the industry faces a structural gridlock that is confined to a stereotyped familiarity. This lack of perspectives breeds a polarised society deepening social exclusion and discontent. Hence we wanted to bring to the fore the female perspectives behind the camera and in front of the camera and the value it brings to challenging the gender narratives. Hoping to influence a wave of change through communication, we strongly believe that it reiterates the need to deconstruct the female gaze and embrace a more all-inclusive mindset. It also amplifies the role of the industry in taking the first step to making a difference.

LBB> Lux is passionate about advocating on behalf of women so what are the brand's hopes and plans for the future?

Sev> Sexist labels are critically damaging to women. A global Nielsen study shows that one out of two women around the world have been judged for expressing themselves differently, and 70 percent of these judgements are related to their appearance. As a result, women self-edit to avoid criticism and develop a lack of confidence. There is growing consensus that sexist labelling is a long-term, critically damaging issue and can have far-reaching consequences.
At Lux, we believe that beauty should be a source of strength rather than a source of judgement. As a brand, Lux is committed to inspiring women to embrace authentic beauty and empower true femininity without the need to self-edit. Through our communication campaigns, activations and partnerships across various markets, we aim to help encourage women to rise above everyday sexism.

LBB> From a business perspective why is this so important for Lux?

Sev> In March 2021, Unilever launched a new Positive Beauty vision and strategy globally which aims to champion a new era of beauty that is equitable and inclusive. We’ve found that three in four people globally think the industry must broaden its definition of beauty and that the same percentage of people globally want the industry to focus more on making people feel better, rather than just look better.
Furthermore, we know that more than half of consumers are now paying attention to a company’s stance on social issues before buying products.  Our brand purpose, therefore, makes Lux more relevant to consumers and society.