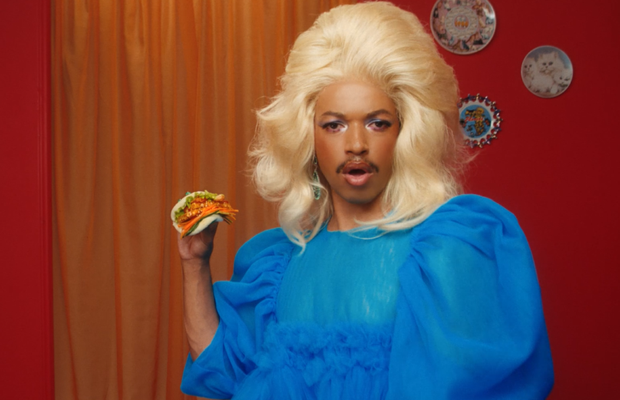 The Tofoo Co, Britain's largest and fastest-growing tofu brand, has launched a new TV campaign written and created by Who Wot Why and produced by Black Dog Films.

The TV ad is a celebration of what we are, not what we’re not, and it launched in the UK on September 6th.

The film features an artist posing in a variety of lavish outfits, presenting equally lavish dishes made with Tofoo. It revels in Tofoo’s and the artist’s uniqueness. Tofoo’s glorious and wonderful in its own right. It’s unlike anything else out there, just like the artist themself. The ad is summed up by the artist’s words, “What? Never seen Tofoo before?”.

Tofoo IS not like other plant-based products, it’s not even like other tofu. The Tofoo Co makes organic tofu from a traditional Japanese recipe. The brand currently has a 53% share of the tofu market, and with consumers increasingly turning to a healthier, plant-based diet, tofu has surged in popularity. 5It’s proud to be itself, a real, natural ingredient that tastes great.

The commercial has the look and feel of a fashion film and was directed by Jade Ang Jackman from Black Dog Films.

The campaign follows “Wow of Now”, the first campaign created by Who Wot Why.

Thryth Jarvis, Head of Marketing for Tofoo says, “Our TV ad is aiming to reach out to new consumers who may have previously dismissed tofu.  We want them to see tofu like they have never seen it before – delicious, versatile, and just a whole lot of fun!”

Ben Walker, ECD at Who Wot Why says “It’s been really fun to create something stylish and impactful for Tofoo. We all go through different tastes but a good authentic and delicious product at the base of what we eat makes for nicer meals - no matter how they are dressed.”

Agency: Who Wot Why