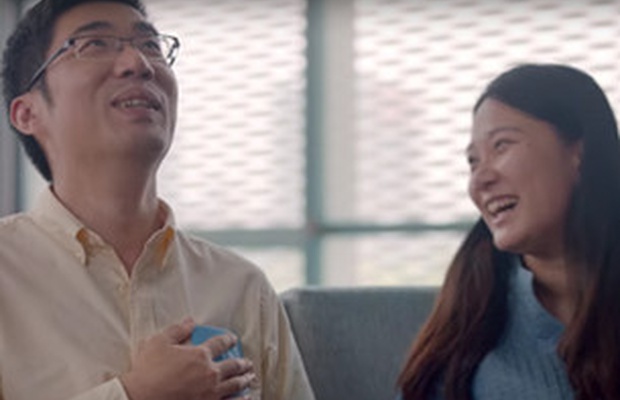 In a society where ultrasound rooms are generally off-limits to would-be fathers, the pregnancy journey for women can sometimes be lonelier than it already is. It doesn’t help that this makes Chinese fathers feel helpless and removed from what their wives are experiencing.
A new campaign by J. Walter Thompson Shanghai for Elevit, a pregnancy multivitamin and mineral supplement, helped bring three real-life couples closer together, reinforcing the notion that planning a baby is a shared journey and why early protection is important for healthy baby development.
A content film titled “All For That First Hello” examines the heightened emotions that expecting couples grapple with during pregnancy. One aspect is how women worry about their partners being away all the time. Plus, with Chinese society becoming less traditional and expectations on fathers changing, the men also worry about missing precious moments. Yet the reality of work and travel often get in the way.
J. Walter Thompson created a wearable device to give the expecting fathers in the film an experience that they have always been missing out. Upon putting it on, the fathers felt a pulsating sensation against their chests. Soon, they realised they were actually feeling their own baby’s heartbeat, which was converted from ultrasound data. The reality of their coming baby dawned upon them, in a most powerful way. As one father-to-be uttered softly: “My heart melted.”
The brand’s campaign struck a chord with Chinese viewers. The film, which garnered 3.5 million views in 24 hours after it launched, has been viewed over 10 million times.
“This truthful and insightful piece of work demonstrates how technology can solve human challenges,” said Norman Tan, J. Walter Thompson’s North Asia Chief Creative Officer and China Chairman. “It takes a great partnership between client and agency for an idea to come this far, with the idea inspiring the digital execution.”
The integrated campaign with social media involvement creates conversations around pregnancy in the changing society in China, and reinforces the importance of early protection for unborn babies through multi-nutrients in addition to single folic acid.
Elevit, a pregnancy multivitamin and mineral supplement produced by Bayer Consumer Health, contains multi-nutrients in addition to recommended dosage of folic acid, working synergistically to prevent and reduce birth defects, can be used from the time a woman starts planning for pregnancy till birth for healthy baby development.