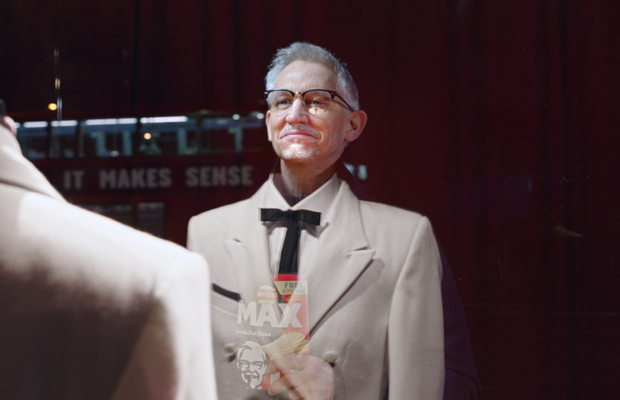 To mark the launch of the new Walkers MAX x KFC flavoured crisps and its on-pack promotion offering a 2 for 1 KFC Meal with every pack, this weekend will see the national debut of the brand’s hotly anticipated TV ad.

“Our focus for 2021 is to bring smiles back to the nation. If it doesn’t make you laugh, it isn’t a Walkers campaign – and this latest creative won’t disappoint,” explains Fernando Kahane, marketing director Walkers Snacks at PepsiCo.

Matt Watson, creative director at PepsiCo, states: “There are some things in life that, once you’ve seen them, just make perfect sense. KFC flavoured crisps – a no brainer, right? But something else we noticed was the distinct resemblance that our very own brand ambassador, Gary Lineker, has with Colonel Sanders himself.

“The new creative sets out to bring this almighty coincidence to the nation with one continuous take, capturing a moment in time where these two great brands come together in real life, finishing with the biggest of all – and it just makes perfect sense.”

The advert was created by PepsiCo’s in-house media and creative agency team, and directed by Rollo Jackson, who carries with him an impressive portfolio of award-winning films, music videos and commercials.

The ad premieres on Saturday 13th February with a 30 second TVC spot during the final of The Masked Singer, and will feature heavily across AV, digital and social media until early April. A further 40 second spot will feature on Sunday 14th February during ITV’s Dancing on Ice and Channel 4’s The Great. The media plan will be supplemented with Walkers’ first ever TikTok Top View creative and a Twitter Spotlight takeover, both going live on Tuesday 16th Feb.

“We are extremely proud to partner with KFC on this initiative, which materialised as a result of our longstanding relationship via our beverages brands,” Fernando continues. “Every campaign, product launch and activation that we actively engage in at Walkers must deliver fun; it has to be democratic, timely and tap into popular culture. It has to get everyone talking, whilst creating a long-lasting connection with our brand.”

Hazell White, senior brand manager at KFC UK & Ireland, states: “The collaboration with Walkers MAX made perfect sense from the start. When it came to the ad, we couldn’t ignore the fact that The Colonel had his very own doppelganger. At KFC we love working with visionaries, so it’s been amazing to have the creative mind of Rollo Jackson behind the camera for this.

“We’re excited for the nation to see the true Gary Lineker and hope they enjoy the ad whilst tucking into some Walkers MAX x KFC flavoured crisps.”

Walkers MAX Kentucky Fried Chicken and Walkers MAX Double Crunch Zinger are available all-year-round, and have launched with a limited time on-pack promotion, giving consumers a 2 for 1 KFC Meal for One with every pack. Consumers simply need to buy a promotional pack and take it to their local KFC restaurant for takeaway or drive-thru to claim a 2 for 1 KFC Meal for One. Valid until 31st July 2021, the offer can be used for dine-in at a later date, once restaurants have fully reopened, as long as customers hold onto their promotional crisp packs.