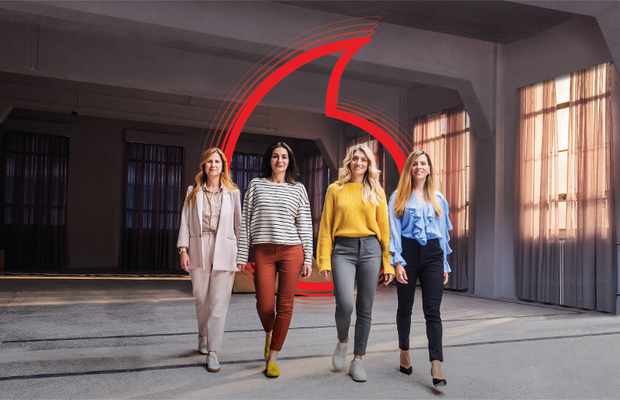 WomenInBusiness.Connected is a 360 campaign, a purpose-led initiative for female business empowerment and the first “stand close” campaign following the “Together we can” Vodafone rebranding launch in Greece.
WomenInBusiness.Connected was launched via an integrated campaign, in two phases, with the following objectives:
First was the launch phase, revealing women entrepreneurs’ proven performance to awaken perceptions and boost their confidence.
Second was the proposition phase, presenting the complete offering to female entrepreneurs to scale up and digitise their businesses.
The offering to women entrepreneurs includes the following services free of charge by Vodafone:
1. Creation of a website or e-shop
2. Upgrade the fixed line internet to Vodafone fibre 100mbps.
3. Personal Business Advisor for technical or any other related support.
Wunderman Thompson Athens was responsible for the implementation of the entire communication plan, while other partners include research agencies Focus Bari and ICAP. The campaign is based on research findings for Women SoHo Entrepreneurship in Greece
The protagonists are real entrepreneurs and Vodafone customers. What you see in the TV spot is their original reaction when finding out how great they actually are and they didn’t know what was behind the sliding mirror, so there was no acting.
Female SoHo entrepreneurs have a proven capability managing efficiently their available business capital. Despite their remarkable performance, female SoHo entrepreneurs show a lack of confidence in their skills and perceive themselves as less capable in business than they actually are. Therefore, they run their business with calculated safe steps and hesitate to be exposed to the unknown. As such technology adoption has a lower rank on their plans, putting an unreasonable barrier to their potential and growth.