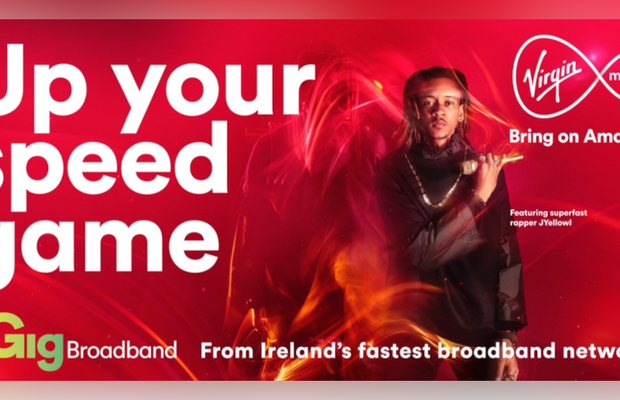 With everything coming to a standstill for artists and fans alike, 2020/21 has been the slowest year and a half in history for the entertainment industry. As an entertainment brand and Ireland’s fastest broadband network Virgin Media were determined to take their famous speed (1Gig) and show how it can help artists and customers do extraordinary things, no matter the restrictions.

Publicis partnered with the country’s fastest up-and-coming rapper JYellowl to produce a special release; ‘Pick up the pace’, which celebrates the performance of speed through rap (listen on Spotify, all major steaming platforms and across national and local stations). The launch campaign includes a beautiful vinyl edition for the music press, exclusive behind-the-scenes footage capturing the recording process, and TV appearances by JYellowl. Finally, Virgin Media have planned a unique show where fans can finally watch him perform live in person, later this summer.

Jyellowl, like Virgin Media, is constantly striving to up his speed game.

The campaign is currently live across radio with OOH, DOOH, social and display being launched next week. The track will also drop on Spotify and and all major streaming platforms.

Ger Roe, board creative director from Publicis Dublin says: “Virgin Media is an entertainment brand and they stand out from the competition - so what better way to prove their speed than by producing some great entertainment that stands out!  In a year where live entertainment and artists hit a slow patch, we took the opportunity to collaborate with the lighting fast MC JyellowL and show how extraordinary things can happen when you up your speed game.”

Fiona Mahon, senior marketing communications manager at Virgin Media says: ‘It's been fantastic to work with the team at Publicis building on our position as Ireland’s fastest broadband network and showcasing the speed of our 1GIG Broadband package. We were delighted to collaborate with rapper Jyellowl on his track ‘Pick up the pace’ as a key part of the campaign which also includes OOH, DOOH, social, display and physical vinyl singles. The fact we have been able to include our speed brand message within all this in such an entertaining and innovative way is a bonus, and we will be giving fans the opportunity to hear the track live in person later on this summer.’