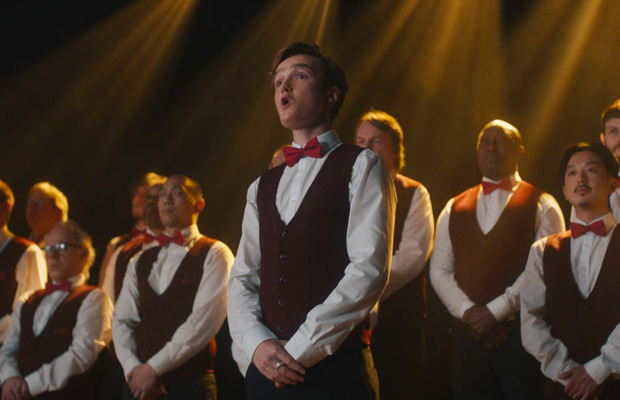 Today pizza company Domino’s launches the follow up to its hugely successful DOMIN-OH-HOO-HOO campaign with a bold new attention-grabbing creative. A milestone moment for the brand, the spot represents its first ever Christmas advert, and in true Domino’s style, is a campaign that captures the festive spirit with a twist. The integrated campaign drives home the joy of sharing a Domino’s slice amongst friends, family and colleagues, reunions of which many missed out on last Christmas. Domino’s invites customers to put a yodel call out to loved ones for a rollover Christmas, and introduces ‘The Festive One’ – Domino’s first foray into a festive menu.

Following the first DOMIN-OH-HOO-HOO campaign which was a huge success and reached 95% of the UK population, the latest campaign will help to supercharge this Christmas, positioning Domino's as the ultimate crowd pleaser for get-togethers happening across the nation as families, friends and colleagues meet up this Christmas for what could be the first time in two years.

The hero 40-second film captures the festive spirit, set in a charming town hall which has been beautifully lit for Christmas, and is packed full with an audience eager to enjoy a Christmas carol service. The film comes to a focus on the lead choir boy who then nervously and unexpectedly breaks into an angelic Christmas yodel “DOMIN-OH-HOO-HOO”, translated to ‘Domino’s after the show?’ The lens moves from the choir boy to the audience and the conductor who are completely puzzled by the outburst, but one by one, the rest of the choir begin to join in with the festive yodelling. The choir responds in song with yodels like ‘count us in’ and ‘I hear there’s a new festive pizza.’ The film ends with the reappearance of two hero characters from the first DOMIN-OH-HOO-HOO ad, one of whom is unable to stop himself from joining in with the yodelling as his friend looks on disapprovingly. The final scene concludes with a backstage shot of the yodelling choir and audience tucking into a piping hot Festive One, and finishes with the hero voice over; ‘Get everyone together with a Domino’s this Christmas.’

Like the first chapter, this campaign will continue to be audio-first, creating a valuable new asset of sonic branding for Domino's. Taking its message to social media, the Domino’s Christmas yodel choir will hit all the high notes as it helps deliver the special Domino’s pizzas as part of the social extension of the campaign. A number of unsuspecting customers, who place their order through the group ordering function on the brand’s award-winning app will be in with the chance of experiencing the yodelling choir in person as they deliver a pizza-parody of a Christmas classic. Forget Christmas carollers, fellow yodellers will be encouraged to use the campaign hashtag #DominOhHooHoo and join in with the Domino’s festive community and spread the message of togetherness this Christmas season.

Sarah Barron, chief marketing officer at Domino’s said: ‘The beauty of pizza is that it’s a meal that is great for sharing. At Domino’s we love being part of reunions amongst friends and family, and are excited to offer a slice of festive pizza during this magical time of the year. Our yodel debut worked incredibly well, and we’re excited to bring our first ever Christmas ad to fruition with a yodelling choir.”

David Masterman, creative director at VCCP added: "It’s Christmas, and for many Christmas immediately makes us think of carol singing. But a brand like Domino’s isn’t interested in sticking to the status quo for their Christmas ad debut. Have you ever heard a yodelling choir singing beautiful Christmas carols? We thought not! And that’s what makes Domino’s different, we’re always determined to deliver creative that people don’t expect and that make people crack a smile. DOMIN-OH-HOO-HOO, have done it again!”

Created by VCCP, VCCP CX and Girl&Bear the film was directed by celebrated Somesuch’s director, Sam Hibbard. The integrated campaign will run for the festive period in the UK and Republic of Ireland and will roll out across multiple channels including TV, video, display, radio, OOH, social, retail & CRM. Havas Media are responsible for the media planning and buying. The hero spot will run on TV and video, with cut downs in the digital space. A PR campaign will accompany the media strategy, developed and executed by One Green Bean.