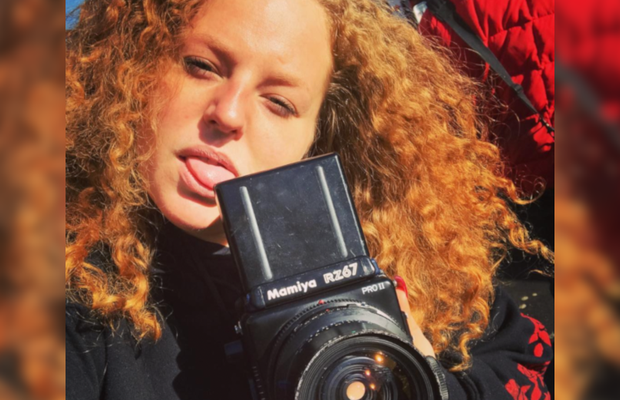 After entering the creative industries as a photographer, Olivia Rose made the shift into directing on a whim. She now finds herself directing at Stink, with music videos for Skepta, Jorja Smith, Jess Glynne and Ty Dolla $ign under her belt. Olivia’s desire to find ‘real human connection’, shake the feeling of imposter syndrome and create lasting change are what motivates her in her career. But this isn’t at the cost of fighting for what she believes in.
If creativity is indeed inherited, Olivia was surrounded by a plethora of projects that exposed her to the creative industries from a young age. “I grew up with a DIY mum in the house (a prop stylist, set designer and costumer) who pretty much taught me that if you put your mind to it, you can make anything out of anything,” she says. Olivia developed a nonchalance towards the six foot high toothpaste tubes that cropped up in her living room and cakes in the fridge with ‘DO NOT EAT, THIS IS A PROP’ signs. Her friends, on the other hand, gave her an alternative perspective, “I wouldn’t blink an eye, but whatever friend I had brought home with me would have so many questions; to me, it was just how our house was.” Olivia’s upbringing meant she learnt a unique talent for when the holiday season approaches. “As soon as October came around, I’d be enlisted to wrap empty boxes for Christmas shoots. I’m still an excellent gift wrapper now… making things is part of my love language!”
Grateful for her upbringing, Olivia’s privilege isn’t lost on her. “I’m a white middle class woman who was privately educated,” she says. “So therein lies the basis of all of my ignorances and misconceptions of the world. That said, I am grateful for my education because I was given the greatest gift a child can receive at school - an innate understanding and confidence that no matter what the weather, I can land on my feet.” Olivia cites her mum as her inspiration, keeping her grounded and continually supporting her curious mind. “A born-and-bred Bethnal Green girl who lived in various council estates around E3 growing up, there’s always been a sense of the hustle in her house.” And while Olivia inherited her photographer’s eye from her dad, her business mind was undoubtedly moulded by her mum.
Reflecting on her education, Olivia says, “It wasn’t until university that I really discovered how lucky I had been, to have had the education I did and the opportunities I had been presented growing up.” It was at London’s Central Saint Martin’s (CSM) that Olivia completed her foundation year and her undergraduate degree in Fashion Photography. Though she yearned to leave photography behind, she began to embrace it and trust her eye, always mindful to keep diversity and representation at the forefront of her mind. “I’ve spent a lot of years unlearning my inherent biases and now hope that I am active in making a change; both in who is represented in front of a camera, but more importantly, who is being paid to work on a project behind the scenes. Who is informing the work? What cultural eyes are we bringing to any given job? Am I right for the project at all or should it be passed on to someone else?”

Olivia believes it’s time for the industry to make strides towards the future, changing the statistics which are skewed towards a certain profile. “Our world, whether we like it or not, is still run by a majority of straight, white, cis men. And statistically, those directors still win the biggest jobs. They still win the most awards. They are still the most ‘trusted’ demographic. I think we need to diversify the people who control the purse strings and ultimately award the jobs.” Not only does she believe that one in three directors on a pitch being a woman isn’t sufficient, but she also reflects on diversity bringing with it a difference in cultural sensibilities and the scope to appeal to an entirely new, untapped demographic.
But there’s more to life than work and Olivia spends her free time indulging in things she loves. “I smoke cigarettes, I flirt with too many people, and I watch true crime documentaries until my dreams are full of horrible murders. I also walk my friend's dog, Coco, a lot - or does she walk me? I can never quite decide, but Coco has given me back a sense of how much I love to be out in nature with my headphones on to drum up some new thinking.” And this thinking took her back to her 15-year-old self, which was the last time she remembers actively pursuing her passion for creative writing. Olivia is now working on developing her screenwriting projects, while cooking delicious food and trying to incorporate some self-care into the mix.
“My motivation seems to come from the fact that I always feel the need to prove something to someone,” says Olivia. “But I’m not sure who. I just know that I never feel like the last project I worked on was quite good enough, so I’m always trying to top myself. It’s not a very healthy way to live, but it’s my life, so I treasure it and try to balance it out with the self-care skills I have learned with the help of my therapist. Check back in five years from now and see if I have learned the art of a work-life balance… and if I have, remind me to tell myself that I’m proud of my progress!”