The creative lead at Modifly on a willingness to accept criticism and learn, the need for more female creative leaders and using childhood negativity to fuel adulthood success, writes LBB’s Ben Conway 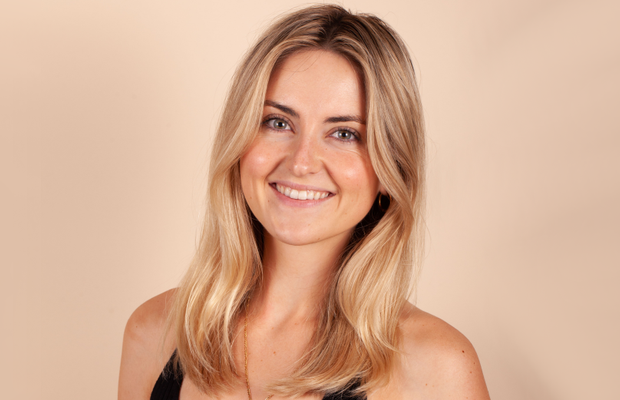 Despite playing sports, becoming a black belt in karate and trying ballet, Cameron Booth was always interested in art more than anything else. Spending weekends painting and drawing with her mother, she grew up surrounded by all forms of art and was encouraged to explore all of them and express herself. As an only child of divorced parents, the cultural differences between her mother’s French family and her father’s Texan one meant that her experience was vastly different depending on who she was with, which she says taught her “independence, good listening skills, and conflict resolution” as well as “a lot about love and acceptance”.

Always driven by ambition and her curiosity, Cameron considers herself “a true extrovert”: “I really feed off of other people’s energy,” she says, “Everything I do, I go all in. And I try to keep my team as positive and motivated as possible. I love making work not feel like work, and having my team members feel like family.”

Quickly changing her initial trajectory from a business degree to pursue her passion for art and graphic design, Cameron double-majored in strategic communications (media design and media studies) at the University of Colorado. And she was hooked from the very first class. “I had never found something I was so interested in right off the bat in school, and it was the first time I had ever felt excited about going to class.” After graduating in 2020, she looks back fondly on her time there as a place where her passion for advertising began. “ I had an incredible experience learning from seasoned ad professionals and social media experts. My senior year, I was the creative director for the CU Boulder National Student Advertising Competition (NSAC) team, where my love for the ad and creative industry was cemented.” During this time, she also gained her first professional experience, interning at Modifly when the agency was in its infancy. She says: “It was wonderful and terrifying to have to navigate a lot of things on my own as an intern. I fell in love with social media design and learned so much about the paid media industry that it was an easy decision to join the team full-time when I graduated college.”

Some of her first professional projects were for freelance clients that she acquired marketing herself as a ‘much better designer’ than she was at the time - using the fundamentals from her degree and the many hours of design tutorials from ‘YouTube University’. Cameron says: “I started at Modifly around this time, and it forced me to catch up to what others in the industry were doing. The earlier work I did was not great, but I learned so much just saying yes and learning on the fly.” One of the key lessons that she learned from this period was a willingness to accept criticism, something she describes as an inevitably of the industry, regardless of your skill or experience level. “Take it with a grain of salt and use it to get better.”

Carrying this advice with her today, Cameron recently worked on a brand launch that included a full web design, email campaign, paid media, a brand guide and more - all in less than three months. The creative direction had to be pivoted several times late on, but she ensured her team used any criticism in a positive way. “I had to remind myself not to take it personally and to keep thinking outside the box. As the leader of the creative team, I also needed to encourage the designer and copywriter that we could make it better each time around, and provide the proper support and direction on how to do so.”

Another project that Cameron believes was a catalyst in her career is Super Coffee's #AddSomethingPositive campaign that she also worked on at Modifly. The young creative lead was in charge of creative strategy as well as designing the paid media for a high-performing conversion campaign and produced 110 multi-platform ads within a “very stressful” few weeks. It was her first opportunity to prove her creative strategy abilities and she still remembers the feeling of pride that the successful campaign elicited. But besides pride in her good work, what gives Cameron the most joy is the ability to create art for a living with a “talented, ambitious and fun” group of people.

Now that the pandemic seems to be easing, the young creative can turn to her professional ambitions once again - overcoming the difficulties of staring at a computer all day, as many graphic designers working from home have experienced. “I would really love to work on a commercial. Right now, my focus is on mostly social media advertising – which is a very important component of revenue growth and brand awareness for our clients – but I think it would be a blast helping a client put together a commercial campaign.”

To stay ambitious and up-to-date with her contemporaries, she says that she’s “always looking for badass work” and follows the people making the biggest waves on social media. “I also spend a lot of time on Pinterest, making boards that I could use for client work or personal projects. I'm constantly researching, because if you don't, you will miss something.”

When interacting with fellow creatives, Cameron says there is “nothing better” than debating fonts - her personal favourite being Gotham - or the benefits and drawbacks of graphic design platform Canva. However, the issues that truly get under her skin are matters of sustainability and gender equality. “There are so many brands out there that should be tapping into this [sustainable packaging] market and with the amount of non-biodegradable materials used in consumer product packaging, it is imperative that designers begin to think of new solutions that allow for beautiful design and contribute to a healthy planet.”

When discussing the need for more female creative leaders, she explains that around 3% of creative agencies have female creative directors, and less than 0.1% of creative agency founders are women - shocking statistics when compared to the majority proportion of women that are purchasers of most consumer products. She says: “A problem that arises from statistics like this is that a lot of young female designers feel they need to answer to a man or get approval from a man to succeed in the creative industry. Although the industry has come a long way from the Mad Men days, there's still a lot of work to be done and many male-dominated creative agencies are missing a big opportunity by not hiring top female talent.” In an effort to promote diversity inclusion and help combat these issues in her own life, Cameron is currently assisting in the creation of a culture committee at Modifly.

The creative lead has been living in San Diego since May 2020, benefiting from the 75-degree Californian climate and proximity to the ocean during an otherwise stressful period. “Adjusting to being at home most of the day was tough initially, but I've learned to appreciate it,” she says. “I work out a lot to keep my mind and body fresh, I walk my dog daily, I go on runs, I lift weights, and I go to spin class. After a long day, or when I have free time, I love to treat myself to movement.” When she’s not out exercising with her golden retriever Cosmo, painting or enjoying taco Tuesdays, she uses her Instagram account ‘@cams_cocktails’ to review cocktails and even jokingly debates setting up a hand modelling portfolio, after doing a lot for client photoshoots.

Regarding social media, however, she (begrudgingly) admits that Tiktok has crept into her life as an all-time favourite platform. “It's fascinating how many creators you can be exposed to just scrolling through the app once. It really is a genius platform. Some of my favourites are @adam_theillustrator, @katherinewants, @bbyklaric, and @utopia.us. Anyone who is creating or doing cool and unique stuff I'll usually follow.” Though, outside of the abundance of fresh, young creatives on Tiktok, Cameron says her professional graphic designer influences include Paula Scher for “her risks with typography and overall work at Pentagram” and the man behind the ‘Dove Real Beauty’ campaign, Brian Collins.

The young creative acknowledges that, whilst these influences are important to her professional development, a lot of her personal drive is sourced from within, for example, taking the distress and negativity from her childhood and using it as fuel to “make adult life as wonderful and positive as possible”. On striving to make her adult life and professional work the best it can be, she says: “One of my all-time frustrations as a designer and creative leader is feeling that I could have done better. Sometimes looking back at the deliverables I can over-analyse what I could have done differently. It’s a constant learning process as a creative, but sometimes it's hard to remember that.” In order to achieve her goals and live a life free of these frustrations, she explains that, sometimes, you have to put yourself first.

“I do things to make myself happy. I'm selfish about my time and energy. You only get one life, so I try to not let the bad parts keep me from living out the good ones.”