Campaign from The Public House highlights inequalities in vaccination rates 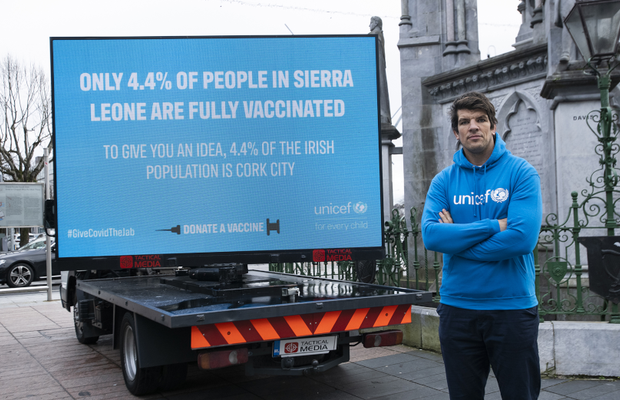 As Ireland’s booster vaccination roll out gets into full swing, UNICEF Ireland wanted to highlight the stark reality of low vaccination rates in low income countries including Chad, Yemen and Syria.

Travelling around towns and cities across Ireland, the campaign message was specifically tailored to each location to maximise impact, comparing vaccination rates with low income countries. During its travels the admobile made stark comparisons, such as:

The purpose of the campaign was to raise awareness of how under-vaccinated other countries are and encourage the people of Ireland to continue to support UNICEF’s global vaccination efforts. Alongside the ambient outdoor campaign, the campaign included social, VOD and influencer comms.

Natalie Hopkins, business director at The Public House, commented on the campaign: “After almost two years living with Covid-19 and one year on from the start of the vaccination campaign, we are exhausted and desensitised to news about the pandemic. Although we all know how necessary it is to ensure the entire world has fair access to vaccines, we hope that putting it in a familiar frame of reference will help to contextualise why this effort is so necessary.”

UNICEF Ireland media and communications manager, Danny Smits said: “This campaign helps Irish people understand the stark reality of low vaccination rates in other countries.– It brings it close to home for people. We all know that no one is safe, until everyone is safe. UNICEF has delivered over 700 millions Covid-19 vaccines already this year, but many more are needed, and we’re hopeful this unique campaign will help us raise awareness, and critical donations for our global vaccination efforts”.

Colin Hart, creative director, The Public House, added: “We’ve started to take the fact that we can get a vaccine for granted when a large portion of the world hasn't even really begun. To help people in Ireland get their head around the scale at which the world is rolling out the vaccine programme we created this campaign targeted as closely as we could at home’.

The campaign for The Public House is another example of the agency’s anti-formula approach to building attention grabbing work that is in line with their philosophy that ‘boring doesn’t sell’. The independent creative shop works with a diverse portfolio of ambitious clients including FBD Insurance, EPIC: The Irish Emigration Museum, 48, Redbreast Irish Whiskey and Barnardos.

Unpaid Internships, and How Agencies are Short Changing Themselves