The Rise and Rise of SheSays 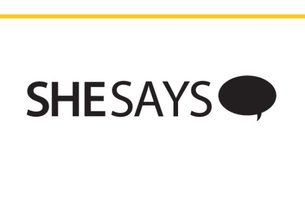 “We just kept bumping into each other because we were always the only two women on a panel, so we knew we had to do something together,” says Laura Jordan-Bambach. Back in 2007 she and Alessandra Lariu launched SheSays, an initiative designed to support women in the creative industries, after finding themselves the ‘token women’ at one too many advertising events.
SheSays started off life as a series of London-based talks featuring all-women panels and exploring everything from trends to careers advice. But there was clearly an appetite for what they were offering, and since then SheSays has grown to fill a vacuum; there are now bases in over 20 cities around the world and the SheSays stable of activities now includes courses, awards and online collaboration.
One of the key aims of SheSays is to help get more women into top jobs in advertising, particularly in traditionally male-dominated areas such as planning and creativity. Both co-founders have carved out successful careers for themselves; Jordan-Bambach is currently the Vice President of D&AD and a board-level creative director at Dare and Lariu is now concentrating full-time on SheSays and Shout but has in her time been Group Creative Director and SVP at McCann Erickson. Rather than rest on their laurels, both are committed to using their experience and influence to change the industry landscape and support women further down the food chain.
Mentoring is one area where there has been a self-fulfilling bias.  When fewer women occupy top jobs, it can be harder for those taking their first steps into the business to foster nurturing professional relationships and learn how to shape their own careers. Though there are certainly successful cross-gender mentoring relationships, it can be a tricky path for both parties to negotiate. In order to bridge the gap, SheSays holds regular speed-mentoring events and runs a dedicated matchmaking scheme, ‘Who’s Your Momma?’
While SheSays presents its own regular discussions and networking events over the globe, the organisation also hopes to encourage other conferences and award shows to open up and diversify juries and panels. One of the benefits, perhaps, of having a network of over 8,000 people to call on is that SheSays are able to bring together a dream team of influential and interesting women more than capable of shoring things up. Last year, they launched the wryly-titled ‘Find a Token Women’ tool which allows users to contribute to an ever-evolving list of the best female speakers. Despite this there, all-male juries are still an unremarkable, frequent occurrence.
SheSays also bestows its own prize for women across the advertising industry, the Golden Stilhetto (“the first ever wearable award for women who stepped it up”). It recognises achievement beyond the creative disciplines. While the role of awards is a matter of on-going debate, both Jordan-Bambach and Lariu have seen the Golden Stiletto have real effects of winners’ careers.
“It’s been great to see SheSays having tangible effects on women’s careers. With the mentoring scheme, I’ve seen a junior designer learn how to progress her career and go on to become an ACD,” says Lariu. “People who have won our Golden Stiletto award have been able to use that to negotiate a pay rise.”
Running alongside SheSays is ‘shout’, a co-collaboration platform for digital creatives. Lariu is reluctant to label the platform a form of ‘crowdsourcing’. Though it draws upon similar mechanics, the platform has also been designed to encourage offline as well as online collaboration and ensure that time and effort invested into answering briefs or supporting fellow members by helping them refine their own brief is rewarded. Those who do not see their idea sold to a client can still accrue points which convert to payment at the end of the year.
With all this effort ploughed into the enhancement of women’s prospects in adland, Lariu and Jordan-Bambach emphasise that SheSays is not designed to shut men out. Men are welcome to attend the SheSays courses and talks, for example. “You do get people saying ‘yeah but why don’t you have a ‘HeSays?’ Pretty much every event you go to is a ‘HeSays’!” laughs Jordan-Bambach of the continuing imbalance on the awards and conference circuit. “It’s my ambition to have a D&AD 50/50 next year!”

SheSays Asks Employees to Spam Their Boss for Equality

Why 2021 Could Be a Giant Leap for Sustainable Advertising Production

Planning for the Best: Vicki Holgate