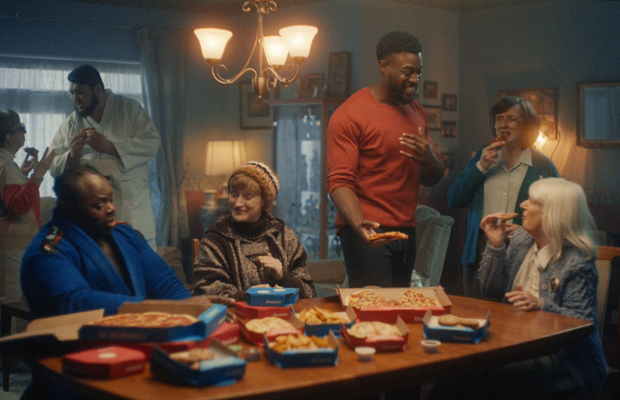 Domino’s, the UK’s favourite pizza company, has launched the next iteration to its hugely successful DOMIN-OH-HOO-HOO campaign across the country today. Back by popular demand, the new playful creative reveals a highly sought-after new deal offering 50% off pizza when £30 or more is spent online.

Created by agencies of record VCCP alongside its CX and production arms VCCP CX and Girl&Bear, the DOMIN-OH-HOO-HOO campaign continues to delight the nation following the success of the first two films which reached 95% of the UK population and started a yodelling movement. The third instalment reveals a reason to be happy this January, a month common with tighter purse strings - a crowd-pleasing nationwide deal.

The new 30-second hero film called ‘Betty-Hoo-Hoo’ was directed by renowned Somesuch’s director, Sam Hibbard, who created all previous spots in the series. The creative spotlights Betty, who appeared in the first DOMIN-OH-HOO-HOO spot, after lots of consumer interest about her own pizza eating habits following the first yodel campaign.

The TVC opens with Betty sitting in her armchair at home, putting the yodel call out to her friends asking who fancies a Domino’s. We then see two of her friends respond who are in the middle of a game of bingo. They reply with a cheery ‘Great call, Betty!’ which then kicks off other characters in the film yodelling their own orders such as a ‘Texas BBQ,’ ‘Vegi Supreme’ and ‘Mighty Meaty.’ The playful creative draws to a close with a man, mid chest wax, yodelling out that all delicious Domino’s pizza’s will be half price this January. His yodelling yelp is then interrupted by the two gamers from the first commercial, as his cries echo into their home. The final scene concludes with a classic Domino’s moment showing Betty and all her friends enjoying a Domino’s feast together and finishes with the voiceover declaring that Domino’s customers will receive 50% off pizza when £30 or more is spent online.

Like the previous chapters, the campaign will continue to be audio-first and will also roll out across radio with a series of announcements to highlight the new deal. The radio ads make light of stereotypical dreary feelings of January felt by most following Christmas, and encourage people to view the month more positively, whilst highlighting the incredible nationwide offer. ‘Dreaded January, cold, dark… Did we mention the cold? The only thing we’ve got to look forward to after all this “Januaryness” is, ugh, dreaded February.’ Wish it could be January for ever, January.’

Sarah Barron, Chief Marketing Officer at Domino’s said: “At Domino’s we’re proud our pizza is the meal of choice for crowd-pleasing moments between family and friends. We want to kick off 2022 in style whilst highlighting what our customers love about us– generous portions and fantastic value with market-leading prices and deals. Betty was the unexpected star of our first DOMIN-OH-HOO-HOO ad, and we’re delighted to bring her back to the centre stage where she belongs!”

David Masterman, creative director at VCCP added: “If ever there was a month that needed a bit of yodelling, it's January. So we thought, to jolly things up a bit, we'd revisit Betty from our first yodel ad, as she calls upon her rag-tag collection of mates. DOMIN-OH-HOO-HOO!"

Running today until 10th April the integrated campaign will roll out across a wide mix of channels including TVC, VOD, radio, print and instore, OOH, DOOH, YouTube and digital. The hero TV spot will run across channels from ITV to Channel 4 and Sky as well as on VOD across channels including All 4, to BT Sport VOD, Sky, ITVSTV Player and Google Preferred. 6 and 10” cut downs of the TVC will be used in the digital space. Havas Media are responsible for the media planning and buying.

Fans can join in the Domino’s yodelling community by using the campaign hashtag #DominOhHooHoo.