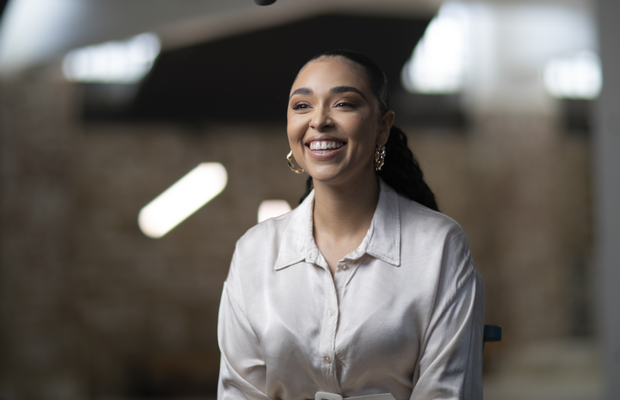 Ashleigh Jadee has produced content for Kiss 100, Beats by Dre, G Frsh, Skepta and Luxottica. At the end of 2015 Ashleigh started directing.

With a vast skill set and amazing people skills it seemed only right that Ashleigh was approached for content creation from brands and small businesses. In 2017 she worked with world wide global fashion brand House of CB where she has now built a name for herself in the industry as a go to for major brands.

2018 has brought many new opportunities for Ashleigh including various panel talks, an impactful online presence and even mentoring other young women in her field. As well as working on her own projects such as documentaries and short films, she directed her first commercial work, the DOOHs for H&Ms global Christmas Campaign.

In 2019 Ashleigh released her own short film and numerous documentaries, whilst also increasing her directorial catalogue with a range of music artists from Joss Stone, Roddy Ricch, Ms Banks, M Huncho, James Morrison, WSTRN and more. Ashleigh has also added one of the most popular TV channels to her repertoire, Comedy Central, after completing 6 music promos for a chart show series. She also won her first award at the Brown Sugar Awards for her impact in the creative industry as a young woman.

Ashleigh> Scripts that I can relate to, and that bring a message//feeling to the audience.

Ashleigh> Sometimes the ideas pop into my head straight away, other times it takes a little longer. I don’t stress over them anymore like I used to. I just let it flow if it feels right and is aligned with what I want to represent.

Ashleigh> Super important, you have to have some sort of knowledge about the client you are creating for. It helps when you can relate or have an interest in them, you’ll connect more or figure out unique details just because of your passion for the project.

Ashleigh> I believe all relationships with everyone on the project is important. As a director you have to lead the show, and having a team who believe in you and and your idea is the best feeling. They will go above and beyond if you show them respect, as you should.

Ashleigh> Projects that tell truth, inspire and highlight my people. I’m now looking to work on projects that push black women to the forefront and represent us properly. Especially in luxury environments.

Ashleigh> I’ve worked with a lot of rappers and people like to box me in, thinking that if it’s a black artist or a rapper, we’ll send it to Ashleigh. I think that’s very small minded, but I understand what you put out is what you get back. As a creative, if your work is great, you can transfer those skills into any genre, and any type of content.

Ashleigh> My productions always run smoothly, I dunno if that’s because of how chilled and laid back I am. I don’t really have any crazy experiences...

Ashleigh> When working with brands and agencies, I understand that they are coming to me for a commission. They already have an idea of what they want, and as they are funding it, they expect to get what they want. I’ve learned to take my emotions out of projects when I’m not funding them myself, or the client doesn’t want to give me much creative control. The best projects are when the client believes in your creative and let’s you lead. When it’s the other way around, it can sometimes feel like just another job.

Ashleigh> I mentor more than I shoot nowadays. I’m already taking this matter into my own hands as I don’t think we should even be needing to have this conversation anymore. It’s still very clear that diversity is a problem, and as a black woman who is figuring out how to even get into certain rooms, I’m not the person who needs to be asked this.

Ashleigh> I care more about what art I put out into the world. The lockdown gave me a lot of time to reflect on my past work, and I’m excited and ready for a new chapter!

Ashleigh> I remember doing a job and we had about eight different aspects ratios! I naturally just think about framing for socials whilst shooting. That’s my business side kicking in lol.

LBB> What’s your relationship with new technology and, if at all, how do you incorporate future-facing tech into your work (e.g. virtual production, interactive storytelling, AI/data- driven visuals etc)?

Ashleigh> Not really my thing right now, but always open to learning.