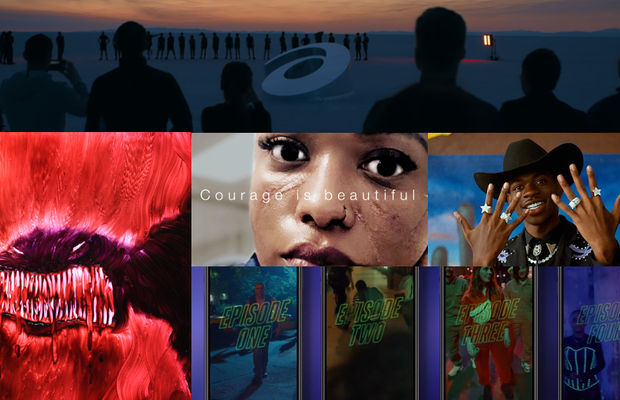 On the third day of Cannes Lions, there was plenty to feast your eyes on and enjoy as juries revealed the winners in the ‘Entertainment’ and ‘Craft’ tracks. It was a strong day for work from the US and UK, which took home four and three Grands Prix respectively, and also for Brazil which also earned two Grands Prix. Taiwan also won a Grand Prix -
The trend for purpose-driven work continued through wins for climate activist campaign Salla 2032 and Essity’s #wombstories work. But today’s categories offered plenty of opportunities for escapism and joy, like the delights of Lil Nas X’s ‘Old Town Road’ music video and Tinder’s ‘Swipe Night’.

Positivity and optimism was prevalent among the winners, and the judges were keen to award work that entertained in its own right. There was no denying that was the case for Grand Prix winner Eternal Run for Asics by Edelman and UNIT9.
Ben Hartman, international chief client officer for Octagon and jury president, noted that the jury found it hard to believe what actually had been achieved when they were evaluating this work. “Here we had a brand in a hugely competitive category that's dominated by some of the biggest brands in the world, and here they were setting up a new sport,” said Ben. “So much of the work that we saw over this two-year period was set up as a battle against some type of enemy, whether it was societal factors we're facing, or the way that the world was set up. What we loved as a jury was that there wasn't an enemy to overcome in this campaign. The idea was based purely on personal joy in being able to overcome your own barriers and boundaries. And as we looked as a jury at the backdrop of the year that we've just faced in 2020, I think all of us were feeling like we were running our own race with no finish line, and he was a campaign that brought that insight to life in a way that only sport could. We were blown away when we first saw it, and we continue to be.”
The category’s second Grand Prix winner combined entertainment with the serious topic of the climate crisis. The closer to the poles, the more pressing the impact of humans on the climate feels. Salla, the coldest town in the Finnish Lapland region, is already experiencing it. So they decided to make it known. Suffering from the consequences of an increasingly unpredictable weather and shorter winters, this small town above the Arctic Circle stepped up and called the world’s attention to the problem in a very unlikely way: by proclaiming its bid to host the 2032 Summer Games.
The announcement soon prompted reactions from all over. Later on and featuring a disclosure video, a press conference was held to elaborate on the town’s statement. The purpose of the announcement, which wasn’t actually a real bid, was a call to the world to help with the ongoing climate crisis. And even though there were no real intentions for the town to submit the bid, Salla followed all steps and protocol in order to host the Summer Games, including creating a logo, a bid book, uniforms, promotional activities and naming a mascot.
It’s a clear example of, as Ben said, “brands are trying to drive change through sport.” Much of the best work around sport was underpinned by social movements such as challenges to the climate emergency or movements driving for equality such as Black Lives Matter.

Though it may feel like a moment in culture we’re way beyond, Grand Prix winner Old Town Road was undeniably a moment. The genre-spanning song was a phenomenal hit in 2019 and its romp of a video allowed it to span cultures and geography in a uniquely powerful way.
The second Grand Prix in the category went to an innovative and defiant piece of work from GUT São Paulo, the first time the new agency has entered Cannes Lions. Brazil has the world's biggest Pride parade, but when it was cancelled due to Covid-19, Mercado Livre, LATAM’s biggest e-commerce brand and a traditional sponsor of the parade, decided to make it happen anyway. It turned the 2.5 metres of the avenue where the parade traditionally takes place into an Instagram feed. By using influencers, people were invited to tag themselves on it. In 15 minutes the avenue was fully crowded. And when everyone thought it was over, Gloria Groove - a legendary LGBTQIA+ singer and activist - released a music video featuring the Instagram handle of every single person. Jury president, Wyclef Jean, president and chief strategy officer, Sodo Mood Lab, said the jury chose this as a Grand Prix because of “the idea of engagement, the idea of courage and the idea that we will never stand down”, adding, “we have to send these kind of signals around the world.”
“This is how the world needs to be,” he added. “The idea of unification, of us being one.”
Of course the pandemic drastically changed the landscape for musical artists and as someone deeply embedded in that industry, Wyclef commented on the many attempts for musicians to tackle the issue of not being able to perform live in person that he and his jury saw. But it was what inspired that ultimately deserved Lions - beauty in response to challenges such as Beyoncé’s video for Brown Skin Girl, which Wyclef borrowed the phrase “global gumbo” from Quincy Jones to describe, in its “representing people of colour en masse” and “looking at it through a worldwide lens”.

“This is not ‘Slightly-Longer-TVC Lions’,” said Jae Goodman, president of the Entertainment Lions jury and CEO of Observatory when he spoke to LBB ahead of Cannes Lions 2021 and the two Grands Prix in the category didn’t disappoint.
Speaking at the digital festival, Jae remembers that, “it used to be that you would go for the TVC the moment you had enough money as a brand. And commercials are still great and we're going to see some great ones in the festival, but we're seeing a lot more brands [...] using entertainment that attracts and engages an audience as their primary upper funnel function instead of interrupting as their primary upper funnel function.”
Tinder’s Swipe Night ingeniously hacked its own dating app to turn it into an entertainment platform. 72andSunny built an original interactive adventure that represents a whole new way to match - a first-person, apocalyptic adventure where at key turning points, Tinder users could decide what happens to them next. Their choices dictated more than just the story; they also impacted who they matched with and what they would chat about once the epic journey ends.
The other Entertainment Grand Prix was the first ever to go to an agency in Taiwan - dentsuMB Taiwan for its work for Sinyi Realty, a leading property developer. ‘In Love We Trust’ is not a long TVC, but a short film designed to encourage young people to overcome their fear of commitment and seek lasting love. Another genuine cultural moment, it was Taiwan’s most shared ad of 2020, according to the advertising platform Judge_Ad. It also ranked as the most popular advertisement on Google in the year’s second half.
"I don't think anybody stepped in to the jury room thinking 'I bet you a real estate development company from Taiwan is going to be a real contender for a Grand Prix this year," quipped Jae. He and his jury applauded the cultural insight: "Talking about marriage rates in regard to then purchasing a home - there will be no overnight business impact from this storytelling. This is about shifting culture in a direction that ultimately helps the brand in business. And it is really hard not to reward and award something that does all of those things at the same time, and does so beautifully and powerfully."
Alice Chou, the chief creative officer at dentsuMB Taiwan said she was proud for Taiwan, "a small island to be recognised" adding that it feels "just like in a dream. We [can't] believe it's true"
"In Taiwan, many people like this this film. We created a conversation," she said. "It's just a very simple story but we reflected the inner struggle of thousands of people in Taiwan who are afraid of commitment, so I think this is a work with purpose."

“Artistry, talent and skill” are at the heart of what the Industry Craft Lions are aiming to celebrate and the Grand Prix awarded in the category today explains exactly how many different facets that has. Dove’s ‘Courage Is Beautiful’ campaign by Ogilvy London and Toronto demonstrates excellence in copywriting, art direction, photography and typography all coming together to deliver a piece of explicitly “Covid work” with poise and authenticity. 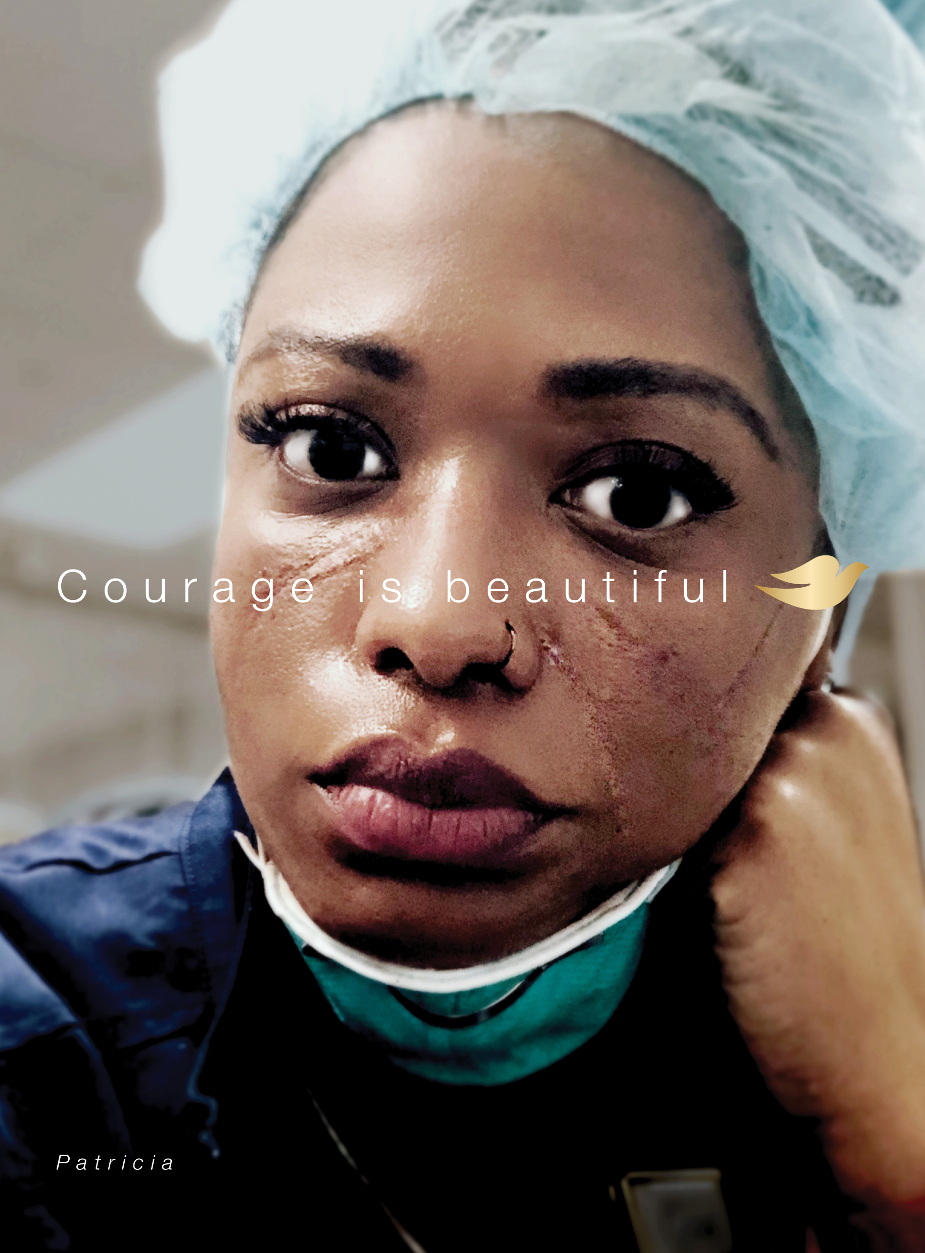 With so much of the world unable to experience something as tangible as a Travis Scott live concert, digital environments such as the world of Fortnite became ideal venues. But turning Epic Games’ online game into a place where fans from around the world could experience a musical extravaganza from the rapper was a task requiring top-tier digital craft skills. And that’s why Astronomical is the only Grand Prix winner in this 2021’s Cannes Lions Digital Craft category. Fans could log in and get Travis Scott’s outfits, emotes, and all other kinds of digital goodies. And if they attended any of the Astronomical events, players could also score an Astroworld Cyclone Glider and two loading screens for free.

Prettybird’s Kerstin Emhoff told LBB recently that as Film Craft jury president she would be telling her jury to look for work they loved first. And what’s not to love about the Grand Prix in the category for 2021?
#Wombstories, the third instalment in Essity’s taboo-crushing series of campaigns around the politics of female bodies was a beautifully crafted expression of people’s complex, emotional relationships with their wombs. Director Nisha Ganatra told LBB back in 2020 about how mixing live action and animation and making the inside of the womb an animated world made the possibilities endless, not to mention the mostly female crew that was firing on all cylinders.
As always, digging into the various subcategories of the Film Craft winners was also a masterclass on the myriad disciplines making a great film takes - from the production design mastery of Crocodile for Lacoste to the expert colour grading on Burberry’s festive film treat or the snappy edit of Life Needs Truth for the New York Times - all Gold winners in the category.