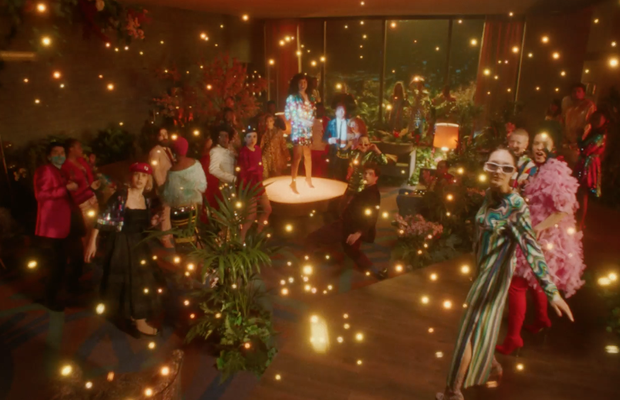 Today Tequila Herradura launches its first-ever global campaign, ‘Extraordinary Awaits,’ with a rebranded image and new 30 second film. In a category that has become repetitive and expected, Tequila Herradura aims to carve out its unique position. In this new campaign, the 150-year-old tequila brand highlights the extraordinary possibilities that await when you try this world class and award-winning spirit. The campaign was made with creative advertising agency Energy BBDO. This is the agency’s first campaign for Tequila Herradura.

The film follows a female protagonist as she navigates a stale party. After choosing to make a cocktail with Tequila Herradura, she unlocks a night of colour, energy, and movement.

The musical track that plays was created specifically for this spot in partnership with Squeak E. Clean Studios.

The new campaign will run on television, online, social and out-of-home (OOH) globally this year. Aspects of the OOH campaign, like a series of vibrant murals, were done in partnership with surrealist Colombian artist Carolina Nino.

If you are unfamiliar with Tequila Herradura, it is an ultra-premium tequila, produced using many of the same authentic techniques when the first bottle was enjoyed more than 150 years ago. It is produced at Casa Herradura, located in Amatitan, Mexico, the last true tequila-producing Hacienda left on the planet. The brand has an extraordinary history, credited with creating both the first Reposado and Extra-Anejo categories, and always aging its tequilas well past industry standards.

This summer Tequila Herradura invites you to raise a glass and experience the extraordinary.

“With over 150 years of tequila production under our belts and credited with creating the Reposado and Extra-Anejo categories, Tequila Herradura has always been extraordinary,” says Mia Simpson Culp, managing director, Tequila Herradura. “With our new extraordinary brand campaign, we’re inviting consumers to raise a glass this summer as we bring out what is extraordinary in all of us.”

“We were given the opportunity to create a visual feast for the senses, from the set design, to wardrobe, to the VFX,” says Monique Kaplan, SVP creative director, Energy BBDO. “The film really captures the essence of Tequila Herradura and seeing where the night may take you.”

"We wanted to make the cocktail shaker an integral part of the track. The power in the shaker is meant to transform this very stiff and dull gathering into a vibrant party, just as Tequila Herradura can transform a night,” said Justin Hori, composer, Squeak E. Clean Studios. “For this song we collaborated with artist and good friend, Piwa, who wrote a great hook in Shona, the native language of Zimbabwe."

EXTRA Gum Gets Through Awkward Social Moments This Holiday