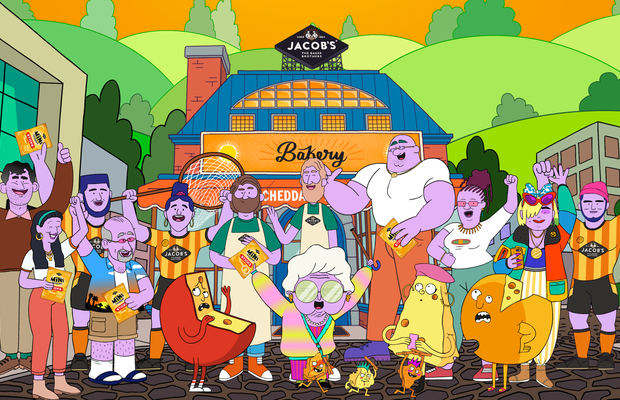 Created by TBWA\London, the ‘Welcome to Cheddar Town’ campaign will be launching on Channel 4 on Friday 12th March and will be accompanied by amplification on social media.

The ‘Welcome to Cheddar Town’ TVC, created by TBWA\London, sees the characters in the campaign living in harmony until the Jacob’s Bakery – the only source of food – runs out of Jacob’s Mini Cheddars. The shortage turns the regular townsfolk – as well as the cheeses themselves – into cheese-hunters. All assets focus on the fact that with the pleasure of real cheese in every nibble, Jacob’s Mini Cheddars are so irresistibly taste that everybody wants a bite.

The campaign comes hot on the heels of the launch of Jacob’s Mini Cheddars Sticks, which saw the brand move beyond its iconic circular crackers for the first time ever and target even more consumption moments – such as the evening sharing occasion – with bigger, bolder flavours.

The creative campaign will also be sponsoring ‘Friday nights in on 4’. This will see the fan-favourite snacking brand run a series of bespoke idents run across Channel 4’s high-performing Friday night schedule, during some of TV’s biggest shows, which will run for 6 weeks.

BLINKINK director Robert Strange says: "Cheddar Town was a dream job; finally all those hours spent watching episodes of Adventure Time and Rick and Morty added up to more than just a hazy memory.

"The most satisfying thing about creating a massive cast of ensemble characters like this is the way the town itself turns into a character; seeing all the townsfolk go mad when the Jacob’s Bakery runs out of Mini Cheddars is just amazing."