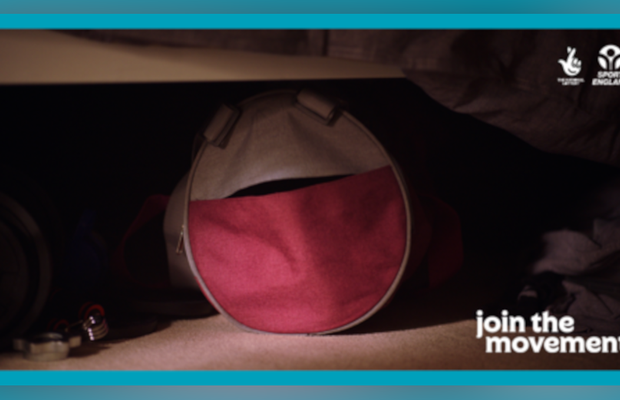 Join the Movement, which launched during the first lockdown in 2020 to inspire people to #Stayinworkout, has returned to tackle a new issue – that activity levels in young men post-pandemic have dropped and are falling from pre-pandemic levels.

The Sport England research has also shown that the pandemic has had a huge impact on the mental health of many young men which has translated into a drop in levels of activity. Their whole wellbeing has been impacted from a career, social, physical and financial perspective, with TV, streaming, and gaming taking place for their once loved hobbies.

Various sporting items including a basketball, a pair of trainers, boxing gloves, a football, roller skates, a tennis racket and a rugby ball are the charming, animated heroes of the campaign, serenading their owners with whom they long ton be reunited and get back to the sports and physical activities they both once loved.

Backed by the Department for Digital, Culture, Media & Sport (DCMS) and funded by The National Lottery, the 15 second social films can be seen on social and online video and are aimed at a broad, national audience of men of all ages to get them back to what they loved.

Kate Dale, campaign director at Sport England, said:  “The activity levels of 16–34-year-old men were hit hard by the pandemic, so we must remind them of how exercise makes them feel and the benefits it brings. Whether it’s the social connections from 5 a side football or the joy of clearing your head after work with a run, we want Join the Movement to help get young men back to activities that they love.”

Sharon Jiggins, EVP at FCB Inferno said: “Over the last two years whilst new habits have been formed there are lots of habits including exercise regimes that have been broken. And our new social campaign is a tongue-in-cheek reminder to get people to once again pick up their exercise equipment that has been sadly missing them! We want to remind people to get back to the sport they love.”