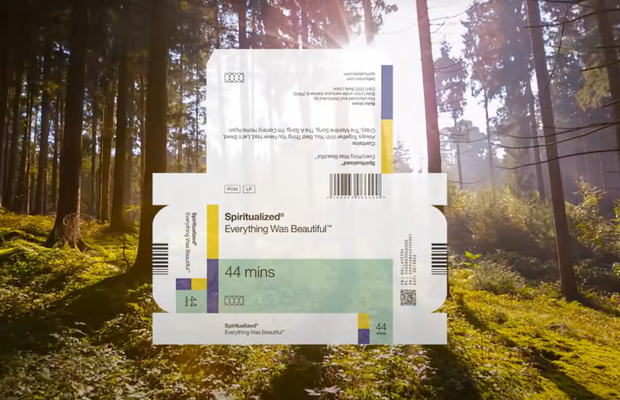 PRETTYBIRD UK co-founder Juliette Larthe has creative directed and collaborated with J Spaceman’s promo for the new Spiritualized track ‘Always Together with You’. The masterful film centres on the reuse and recycling of images from life and that it’s not a linear narrative but a series of broken fragments. The film starts with hyperbolic landscapes and ends with symbolic repetition of the horrors of climate change to the sounds of the euphoric track, and serves to illustrate our human consideration of planet earth.

Juliette Larthe creative director of the video and co-founder of PRETTYBIRD UK said: “The song is like an antidepressant and the visuals illustrate the dichotomy of our antidotes to suffering. There are multiple layers to unpack regarding the connotations of medicine/ medical wellness and the medical packet in the centre of ‘Always together with you’ can illustrate this succinctly. Therefore the imagery can be at odds with this, and an illustration of where we can go wrong. Not all medicine fixes, so although pharmacy promises to help us, lead us by the hand through our darkest times, the song is also a kind message to our younger selves and any time we are struggling that within each and everyone of us there is the ability to find a way out of the hell we have walked ourselves into as individuals and as a human race, there is a door or steps to take to get out of the place. Existentialism and necessary medical interventions aside however, the Monsters manifest, and they are often of our own making.”

Following this year’s acclaimed reissue of their classic first four albums, Spiritualized have announced their new studio album, Everything Was Beautiful, released 25th February 2022 via Bella Union. To mark the occasion the band have shared a visually striking and timely video for lead track and album opener,“Always Together With You”, directed by J Spaceman and creative directed by PRETTYBIRD co-Founder Juliette Larthe.  Spiritualized have also announced dates for an extensive international tour running from March - May 2022 which includes a headline performance at London’s Roundhouse.

While some people imploded in the lockdowns and isolation of the epidemic, others were thriving. “I felt like I’d been in training for this my whole life” says J Spaceman.

He was referring to his fondness for isolation and when you reframe loneliness as “beautiful solitude” then it isn’t so bad. He would walk through an empty “Roman London” where “even the sirens had stopped singing” and where the world was “full of birdsong and strangeness and no contrails.” He used the birdsong walks to listen and try and make sense of all the music playing in his head. The mixes of his new record, a ninth studio album, weren’t working out yet.

Spaceman plays 16 different instruments on Everything Was Beautiful which was put down at 11 different studios, as well as at his home. He also employed more than 30 musicians and singers including his daughter Poppy, long-time collaborator and friend John Coxon, string and brass sections, choirs and finger bells and chimes from the Whitechapel Bell Foundry. So there’s a lot going on.

“There was so much information on it that the slightest move would unbalance it, but going around in circles is important to me. Not like you’re spiraling out of control but you’re going around and around and on each revolution you hold onto the good each time. Sure, you get mistakes as well, but you hold on to some of those too and that’s how you kind of... achieve. Well, you get there.” J. Spaceman

Eventually the mixes got there and Everything Was Beautiful was achieved. The result is some of the most “live” sounding recordings that Spiritualized have released since the Live At The Albert Hall record of 1998, around the time of Ladies & Gentlemen, We Are Floating In Space.

All footage found by J Spaceman

With special thanks to: Adam Curtis