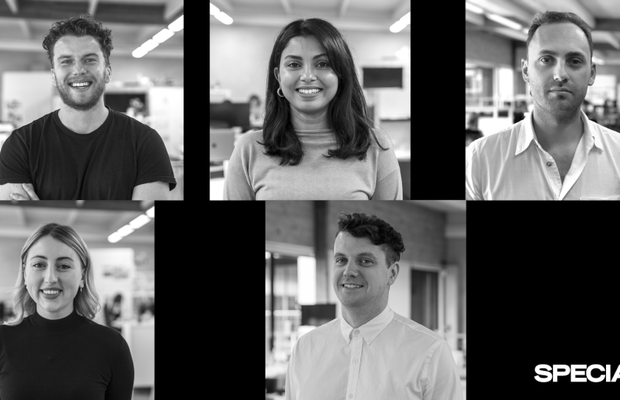 Special has added more firepower to its award-winning strategy team through a raft of promotions, fresh hires and new recruitment.

The promotions are off the back of a particularly strong twelve months for Special’s strategy team.

Rory Gallery was selected as Campaign Asia’s ‘Planner of the Year’ across Australia and New Zealand. Meanwhile Special won New Zealand’s first-ever Global Effie and the agency was recognised across a variety of award shows around the world for creative effectiveness including the One Show.

To help fuel its continued growth Special has hired two new strategists – Jolene D’Souza (as strategy director) and Amy Willemse (as strategist) – and is currently recruiting for additional team members.

Jolene D’Souza joins Special from Dentsu, where she was a strategist on the ASB account. ASB’s work has been lauded as category leading over the last 12 months both here and abroad. Amy Willemse joins Special from DDB TRACK Aotearoa, and rounds out the team expertise with a specialist understanding of CX.

Rory Gallery, chief strategy officer at Special, commented:  "My amazing colleagues have worked extremely hard across a talented group of clients over the past couple years. We are incredibly proud of the business results we’ve generated together and to see Special recognised as New Zealand’s leading agency, being named ‘New Zealand Agency of the Year’ by Campaign Brief, Campaign Asia and B&T.”

“I’d like to congratulate Ed Gunn and Nick Salter on their well-deserved promotions, as well as welcome Jolene D’Souza and Amy Willesme to the Special fold who have already made an amazing impact.”

Michael Redwood, Special managing partner added:  “Special has long been recognised for its world-class creative and design – a key reason we’re as successful as we are in both of those fields is down to the hard work and smart thinking of our strategy team. We’d like to thank Rory and the whole team for their continued effort – and we can’t wait to share some major projects we’re working on behind the scenes.”

“We are very lucky to be working with many of New Zealand’s leading companies and marketers, as well as an increasingly number of the world’s most ambitious brands. It’s great to see the quality of our strategy team’s thinking and business strategies recognised at the highest level globally. And to be able to recognise Rory for his leadership and the whole team for their stellar efforts.” says Special CEO/CCO Tony Bradbourne.