At the Cannes Lions Festival of Creativity 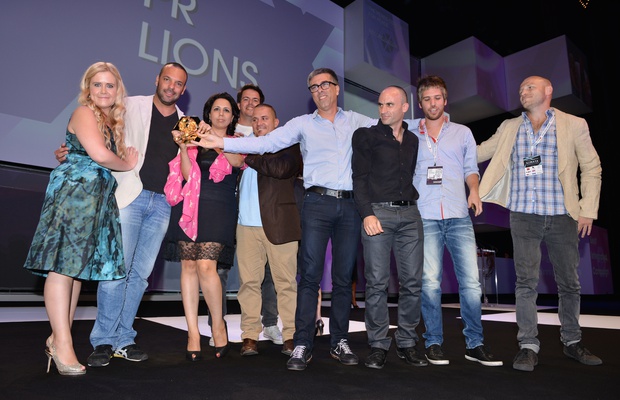 Saatchi & Saatchi Israel has won five gold Lions at the Cannes Lions Festival for their ‘Blood Relations’ campaign. This is the first time an Israeli agency has won this many Lions in the history of the festival.  The awards come in Direct for Public Health & Safety, Public Awareness, in Film for Long Format Internet Film, in Media for Charities, Public Health & Safety, Public Awareness Messages, one in PR for Best Integrated Campaign Led by PR, and finally, another in PR for Charity & Not for Profit.

Yossi Lubaton, CEO of Saatchi & Saatchi BBR, said “The agency is extremely proud to receive such recognition at this year's Cannes Lion Festival.  To receive five gold lions from the international advertising industry just proved to us how powerful this project was. Once again we see that great ideas can make a change, and we are hopeful that our project will be able to make a difference, even if just a little, for the lives of Israelis and Palestinians”.

The ‘Blood Relations’ campaign brought together bereaved Palestinian and Israeli families from the Parents Circle Families Forum to donate blood alongside each other, that would then be donated to save lives on the opposite side.  The first donations took place in September 2011 on the UN International Day of Peace.  Saatchi & Saatchi Israel then worked with the authorities on both sides to get them to agree to accept both sets of blood donations.

The first donations in Israel by the members of the Parents Circle have gone on to inspire further donation events internationally and the project continues to gather supporters and momentum.

The ‘Blood Relations' project was borne out of a global challenge, ‘The Impossible Brief', launched by BBR Saatchi & Saatchi Israel at the 2010 Cannes Lions Festival, where creative minds from all over the world were invited to present ideas that would bring Israelis and Palestinians closer together. The winning idea submitted by Jean Christophe Royer of BETC, Paris, inspired the birth of ‘Blood Relations', an initiative that seeks to bring the two people closer together through the shared act of giving of blood.

The Parents Circle Families Forum (PCFF) is a not-for-profit organization that operates from two offices, the Israeli office located in Ramat Ef'al (suburb of Tel Aviv) and the Palestinian office in A-Ram (north of Jerusalem). The organization is operated and backed up by a large body of volunteers from the bereaved families as trained and experienced lecturers, facilitators and activists. The Forum is supported by a network of friend organizations in the United States, Britain, Germany and Israel.

Consisting of several hundreds of bereaved families, half Palestinian and half Israeli, The Families Forum has played a crucial role since its inception in 1995, in spearheading a reconciliation process between Israelis and Palestinians. The Forum members have all lost immediate family members due to the violence in the region.

Their work is well known within international political circles. President Barack Obama publicly acknowledged them as an example of the desire for reconciliation in the region in his 19 May 2011 address on the Middle East. In September, the Blood Relations project was personally presented to key Heads of UN missions at the General assembly. Their work has also been recognised by President Bill Clinton, President Carter and Desmond M. Tutu, Archbishop Emeritus and has received numerous awards including the Gandhi Foundation International Peace Award in 2010.
http://www.theparentscircle.com/