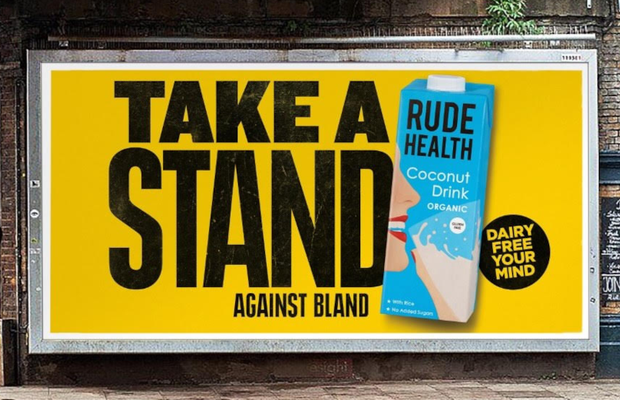 Rude Health, the healthy food and drink brand, is launching its first multi-channel campaign to hero its range of dairy-free milks speaking to those who don’t want to sacrifice taste just because they’re making a healthy choice.

The campaign playfully subverts category tropes by joyfully challenging a commonly held assumption that taste and enjoyment must be sacrificed for health and sustainability.

Initially launching in out of home, print and social, the campaign mimics the design of activist placards, but gives them a liberating and democratising twist – the only thing we’re campaigning for is for better tasting dairy-free products…something everyone can get on board with.

One ad reads: “Our almond milk is saving the world – from not very nice almond milk.” Another reads: “You can go dairy-free without going taste free.”

A third says: “Take a stand against bland.” All ads feature the sign-off “Dairy free your mind.”

Designed to stand out from the clutter, the campaign will appear on outdoor media, mobile and social formats from September in metropolitan areas across the UK.

This is BMB’s first creative work for Rude Health, which has previously promoted its brand through events, partnerships and PR coverage.

Camilla Barnard, co-founder and brand director of Rude Health, said: “Food should be enjoyed, and being healthy and environmentally friendly is no reason to compromise on enjoyment. This is our way of inviting people to make the healthy choice a celebration, not a sacrifice.

“Rude Health was established in 2005 to challenge the assumption that healthy food is bland. Fast forward to today and we’re proud to stand out in a sea of sameness with a large range of flavour-full organic dairy-free drinks, dressed in bright, bold 100% recyclable packaging and made from 100% natural ingredients, grown where they grow best.” Camilla added.

Georgina Thomas, head of marketing at Rude Health said: ‘‘At Rude Health we’re not in the business of making pale imitations of milk. We’re not prescriptive either. Our no taste-bud-left-unturned approach is about making dairy alternatives a celebration. Not a sacrifice. Taking the bland and turning it bright. Because we believe life tastes better when you live it your bright way.’

Jason Cobbold, CEO at BMB, said: “A brand with such a clear and refreshing perspective in its category is a rarity. So, we’re delighted to work with the team at Rude Health to tell the story of their delicious drinks, and their brighter take on life. This is the first, we hope, of many chapters.”

Rude Health believes that healthy doesn’t have to mean bland, boring, dreary or uniform. Their no-taste-bud-left-unturned approach has led them to champion real taste and enjoyment. This has been boosted further by their nine Great Taste Awards gained in 2020.

Creative Team: Will Marsden & Jordon Down