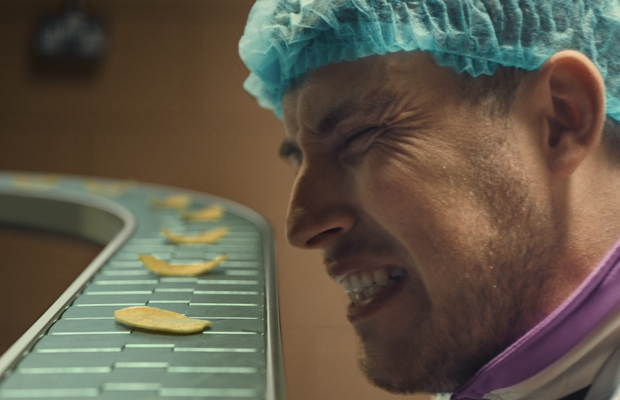 Looking to pack a punch for the latest brand campaign for Hunky Dorys, Rothco, part of Accenture Interactive, have called on the comic wit of comedian Darren Conway and revered comedy director Chris Balmond to launch the platform ‘Go Hunky Dorys or Go Home’.

The story behind the campaign comes from the simple fact that crisps as intense as Hunky Dorys couldn’t be made using the ‘usual’ methods. There’s an undeniable passion behind each taste battering sensation. And that passion comes from a very special employee working on the Hunky Dorys’ production line. He’s known as ‘The Crinkler’.

Played by Darren Conway, Christie the Crinkler is one in a lifetime. Born with the ‘gift to crinkle’ he screams motivation into these tasty morsels as a matter of principle. He’d even do it for free - as his ‘aul fella once said ‘Go Hunky Dorys or Go Home’.

Director of the campaign films, Chris Balmond, has worked with some of the biggest names in comedy across Ireland and the UK and he worked closely with Darren and the team at Rothco, part of Accenture Interactive, on developing the hilarious mockumentary-style script for The Crinkler.

A 30” hero TVC will kick off the campaign and airs on Monday 17th May 2021.The campaign will also be supported by online films, social media, digital, OOH and POS.

Jen Speirs, executive creative director at Rothco, part of Accenture Interactive, comments: “Hunky Dorys is such a great fun brand. Right now, we felt people are looking for some humour and we loved the idea of probing how these unique crisps got their crinkles to give them the bigger, bolder bite and intense flavour that gives us the go hard or go home feeling. The idea that a person could be a born crisp-whisperer seemed like the irreverent fun we all need. Really it was the finishing touches from Darren and Chris that had us - and we hope will have the Irish public - in stitches.”

Karen Hurley, senior brand manager for Hunky Dorys comments: “In our new TV Commercial for Hunky Dorys, Rothco have created a brilliant backstory depicting a humorous dramatisation of the production process involved in creating Ireland’s No.1 crinkle cut crisps. Featuring ‘’The Crinkler’’ who is wild and a little unhinged, it grabs the attention of the viewer and showcases the product and brand personality in a fun and hugely entertaining way. We are delighted with the end result”.