Dublin Buses will be adorned with high-impact messaging, featuring members of the LGBTQ+ community 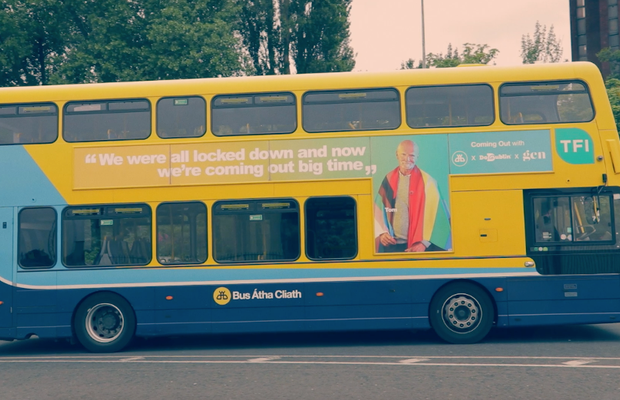 Since March 2020, the pandemic has really impacted how we live our lives. Forced to stay indoors as much as possible, we’ve been unable to see loved ones, travel the world, or simply enjoy being outside of our own homes. The LGBTQ+ community has not only missed out on countless important moments during the pandemic - whether this is a first kiss or a marriage - but has had to witness two Pride parades cancelled in Dublin. A bastion of acceptance for the community, the lack of another physical gathering meant many were preparing to write off Pride 2021 as another event that could no longer take place.

In order to overcome the supposedly impossible challenge of coming out this month, the agency used out of home media as a vehicle for the community to celebrate Pride once more, with a fleet of Dublin Buses and infrastructure having been transformed to mark the milestone.

For a period of two weeks across all routes, Dublin Buses will be adorned with high-impact messaging, featuring members of the LGBTQ+ community. Alongside these images are inspirational quotes from those involved, including ‘we don’t need a parade to come out’ and ‘we were all locked down but now we’re coming out big time’. Longer messages will also feature in the OOH media, providing a unique way for the community to come out and celebrate during Pride.

The OOH media is accompanied by a campaign film which features the day of photography on set, as well as the cast talking about why they are coming out, and their reaction to seeing themselves on the side of the bus. Having been denied their big moment for over a year, the spot focuses on bringing excitement and ceremony to this hugely significant event - as members of the LGBTQ+ community come out to all of Dublin by bus.

Rothco, part of Accenture Interactive, and Dublin Bus partnered with Ireland’s longest-running LGBTQ+ publication, GCN (Gay Community News), to assist with the casting of the campaign - as well as to advise on the project as a whole. Big believers in doing whatever they can to ensure the voice of the LGBTQ+ community is heard, the agency was thrilled to work closely with the publication on this project.

Rob Maguire, creative director at Rothco, part of Accenture Interactive, comments: “It’s an incredibly difficult thing to have a milestone taken away from you. We’re so proud to play a role in the fact that, against all odds, these new members of the LGBTQ+ community are able to come out on the streets of Dublin this Pride month.”

Mary Ryan, Dublin Bus marketing and information manager, adds: “Inclusion and diversity are a core principle in Dublin Bus and this year, although the pandemic posed a fresh challenge, it’s one we had to step up to. As an essential service we know the role we play in people’s lives and recognise the value of supporting every community both across Dublin and within the organisation. So when the physical Pride event was cancelled we knew that there had to be a way we could support the community, even if they couldn't get out onto the streets of Dublin. By being community first and leveraging a unique brand and physical infrastructural role, we're incredibly proud to help people come out to Pride this year.”