Director teams up with FCB Johannesburg on South African campaign 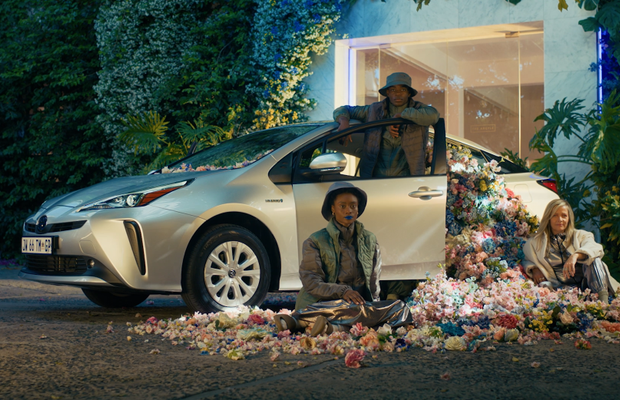 Robot director Paul Ramaema has recently directed a new campaign for Toyota through FCB Joburg, featuring eye-popping VFX graphics overlaid on the Corolla Cross to display some of the car’s key functions.

Toyota is already defined as the world leader in hybrid technology, but this campaign is special considering that the Cosmic Blue Corolla Cross is locally manufactured, making it a first for South Africans.

The campaign aims to bring South Africans and loyal Toyota consumers closer to the world of hybrid technology by revealing its benefits to the motor and environmental industries.

The biggest inspiration for the creative process was the soundtrack 'Feel it still' by Portugal. The Man. It influenced a lot of the energy and pace of the edit. The team wanted the commercial to be youthful, fresh and different, and unique for a local car commercial. The casting became a bit more youthful and dynamic so as to represent the essence of what Hybrid is about, and that soundtrack became the driving force.

FCB's Nakita Bolus comments: "We wanted to create a campaign that shows you exactly what you want, when you want it. We weren’t just selling cars, we were selling future technology, today. And so, we wanted to say hello to the future unlike ever before. Enter Paul Ramaema, from Robot. Paul not only saw the future like no one else but understood its potential. And in true hybrid fashion, we combined forces to highlight Toyota’s world-leading hybrid technology and Toyota’s much-loved charm and character, bringing us exactly what we wanted, when we needed it!"

Line producer David Horler comments: “Reuniting with many crew and talent on a large shoot, and seeing their commitment and tenacity after such a challenging time for all of us, was incredibly rewarding; and an encouraging sign of a return to a new and better normal. I am so grateful for everyone’s collaboration in delivering this forward-thinking campaign for Toyota.”

Director Paul Ramaema comments: “It is an incredible honour being part of, as well as at the forefront of the creative team to introduce the new Toyota Hybrid range. The theme around the dualities of bringing a new way of doing wellness, not only in the human aspect but motor industry too, is what made me fall in love with the concept of a hybrid. The intent became focused on bringing people closer to the exciting world of hybrid technology. Which we approached by shinning a spotlight on forward thinking humans, introduced as our dynamic and youthful cast that became the conduits of the brands all new Hybrid range and Toyota’s future forward technology. An awe-inspiring experience from pre-prod to our music composition and the online aspects of the job. Each element played a key part in shaping this world and we are super grateful to all who assisted in their respective roles”.