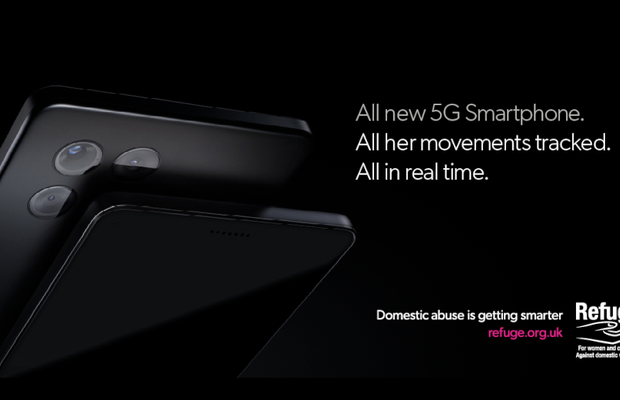 Refuge is marking 50 years of fighting domestic abuse in a new campaign created by BBH, which highlights the insidious ways technology is being used by abusers to monitor and control their partners, and how this makes the charity’s job more complex than ever.
At the heart of the campaign is a 40-second film which, at first glance, appears to be promoting a new smartphone. But as the camera lingers on its elegant design and a voiceover details its features, things take a sinister turn. Maps in real time, we are told, can “keep you up to date with traffic in your area… and her movements”, while smart home features can be used to adjust the heating and lights “even when you’re not at home, so you can control her from wherever you are”.
It ends by reminding us that as domestic abuse gets smarter, the job of Refuge gets harder, along with details of how to make a donation.
This kind of control is one of the fastest growing crimes being tackled by Refuge, which saw a 97% rise in complex tech abuse cases between April 2020 and May 2021. It is also the latest example of how the organisation has continued to adapt the services it provides and issues on which it campaigns since it opened its first safe house for women and children escaping domestic violence in 1971.
The full-length film is running on television, cinema and social media, with a 15-second version also being shared by influencers, including Ayesha Perry-Iqbal. The message of the campaign is being carried through radio and OOH, with posters which also look like tech ads but carry lines like “Watch for your deliveries. Watch her every move.”
Along with sharing the film, influencers will hand their Instagram Stories over to Refuge for a day to highlight content showing just how far abusers will go to monitor their partners, like checking bank statements and tracking their movements outside the home. At the end of the takeover the influencers will reveal that Refuge is behind the strange posts, encouraging their followers to donate.
Ruth Davison, CEO of Refuge, said: “Fifty years on from opening the world’s first Refuge there is sadly little to be celebrating. The numbers of women experiencing domestic abuse appears to be rising, not decreasing, and Refuge has never needed support from the public to support its work more.
“The rise of tech and smart products are of major concern to Refuge. While it is a massive enabler in our lives, for women experiencing domestic abuse it is an ever-growing tool used to create fear, harass, intimidate and control them. Refuge is dealing with these complex issues head-on. It is our job to ensure we support women and meet their needs in a climate where abuse is becoming easier and more complex and ensure that women are not forced offline, or to abandon their tech devices, but instead are empowered to use tech safely and confidently. But we can't achieve this on our own. We need support from the public and our funders more than ever before – women's lives depend on it.”
Refuge has found that in the UK, two in five women say that a partner or family member knows the password to their personal devices, with 28% of these women reporting that they did not give the password out willingly.
Kimberley Gill, Creative Director & Partner at BBH London, said: “It’s chilling how much control an abuser can take of their partner’s life without anyone suspecting a thing, and when you think of how much we rely on our devices these days, it makes you realise it can be almost impossible to escape. So while we would have loved to send out a celebratory message about Refuge’s achievements on their 50th anniversary, the fact is there is still so much work to do, and they can’t do it unless we support them.”