Reach for the Stars: Check Out All the Cannes Lions 2021 Reach Grands Prix Winners 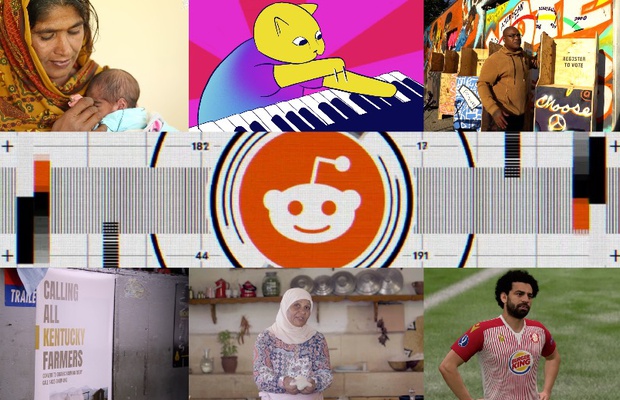 On the second day of Cannes Lions, it was all about numbers, eyeballs and buzz as juries revealed the winners in the ‘Reach’ track.  It was a strong day for FCB, which took home two Grands Prix, and DAVID which also won two Grands Prix for its Burger King campaign The Stevenage Challenge.
In terms of comparisons between the ‘pre-pandemic’ and ‘Covid-era’ work, jury presidents mentioned that they didn’t see as dramatic differences as the work came together. In terms of entries, though, Cannes Lions Chairman noted that while entries into Social & Influencers had surged, Creative Data and Creative Strategy were down on numbers.
“We think that it’s to do with the pandemic; when the pandemic hit everyone was execution mode, all hands to the deck,” said Philip Thomas, Chairman of Lions Festivals, hopeful that as the world transitions out of the reaction phase and into longer term adaptation, the industry will have the space and time to delve into data and strategy to make sense of the new world.
Purpose-driven work was a big trend, though there was still space for fun with comedy for Cheetos and playfulness from Burger King.

Data artistry was a big trend among the winners, and the judges were keen to ensure that the winning work used relevant data and had data at the core of the project.  Epitomising that was the Grand Prix winner Saylists, by Rothco, part of Accenture Interactive Dublin.
Digitas ANZ’s chief data officer, Maurice Riley, was jury president and was full of enthusiasm about the winning project, which marks Rothco’s second ever Grand Prix. “It ticked all of our boxes with ingenious use of data, problem solving, but the thing that it did more so than anything was show at scale how this is going to impact so many people around the world,” said Maurice. “As it grows out, it’s going to bring so much good to the world.”
70 million song lyrics were analysed in the process of making the Saylists. Says CCO Alan Kelly the big challenge was figuring out ‘where to start’, but now the project is out there, there’s no stopping there. “What’s next is obviously it’s great for kids. At the moment its in the English language, the next step is to make it accessible to as many people as possible. Next is I think Spanish and French,” said Alan, spelling out plans to scale up the projects.
One of the key debates in the jury room was data ethics and privacy, particularly as there are different norms in different markets and cultures – meaning that judges were coming to it with varied perspectives. One highlighted project was a Croatian targeted advertising campaign for Pedigree that got round GDPR restrictions on facial recognition by using AI to identify dogs to trigger Digital OOH ads for Pedigree.
Maurice also noted that the ‘for good’ campaigns seemed to be using data in more interesting and boundary pushing ways than more commercial data driven campaigns.

Ahead of the results, jury president Suzanne Powers told LBB that the ‘pandemic jury’ wanted to focus on underlining the ‘fundamentals’ of good creative strategy. The resulting Grand Prix is a bombastic and comedic campaign for Cheetos by Goody Silverstein & Partners that revolves around the insight that the product is known for covering one’s fingers with distinctive red dust. From there, they turned that into a positive, humorously positioning this as the ultimate get out clause – with a suitable celebrity cameo from M.C. Hammer. In a year dominated by serious, purpose-driven work, this was a moment for comedy to come through.
However, among the gold, purpose ran through every winner. Boys and Girls in Dublin won for their project that brought internet connectivity to a remote island. Starbucks and Iris Worldwide won gold for ‘What’s Your Name’, a trans inclusivity movement aimed at younger people, while Project Free period for Stay Free sanitary products by DDB Mudra tackled trafficking and created a route out of prostitution via education.

Winning direct was a clever piece of platform hacking that encouraged fans and players to get involved. The Stevenage Challenge by DAVID Madrid and DAVID Miami for Burger King saw the fast-food giant sponsor the lowest (and cheapest) club in the English premiership as they knew that would see them featured in game on the newest FIFA game.
“Of the trends, gaming played a much stronger role now,” said Jury President Reed Collins, CCO at Ogilvy North Asia. At the suggestion that the prevalence of gaming was triggered by Covid-19, Reed thought that the surge has been building steam long before the pandemic. “To a certain extent yes, but even before it was a silent assassin that was building exponentially around the world.”

The Media Lions’ big winners this year tackled major social issues. FCB Chicago, working in tandem with the City of Chicago fought back against suppression of black voters. The campaign used grafitti’d boards that had been used to block up shop windows and transformed them into booths where people could register to vote. They were placed en masse around neighbourhoods home to marginalised Black voters. The result was a record number of voter registrations.
Pakistan won its first ever Cannes Grand Prix -  a real breakout moment for a country that has been gradually making headway on the international awards circuit for the past few years. Telenor Pakistan and Ogilvy Islamabad solved a real problem. 16 million children in Pakistan don’t have birth certificates, locking them out of medical care and education and putting them at risk of child marriage. Children born at home and in remote locations are particularly at risk – this Android platform allows community leaders, health workers and medical staff to input data about childbirths and parents to create digital records of birth.

There were two Grand Prix winners in the PR Lions category. FCB Chicago and FCB New York created a huge purpose-driven campaign for ABInbev beer brand Michelob Ultra. Transitioning to organic farming is a risky venture for farmers, involving heavy investment on their part – it takes three years but there’s not guarantee of a customer at the end of the process. So Michelob created a contract to guarantee that they would be there as the farmers’ first customer. To do this, they needed to reach every single farmer in every single state in the US.
Meanwhile, McCann Paris tackled taboos around breast exams among women in traditional communities in Lebanon.   They created a special bread recipe and used online tutorial videos to demonstrate breast examinations on the dough. The videos spread online and food influencers got involved, and it was picked up by mainstream media around the world. The project created a language to talk around and learn about breast exams that was comfortable and relatable – and at the end, a poll found that 86% of Arab women agreed that baking would remind them to self-check.

Another double Grand Prix category. The Stevenage Challenge won its second Grand Prix of the day, thanks to the way the campaign leveraged social media to amplify the hack.
Meanwhile Reddit’s ballsy responsive Super Bowl campaign – Superb Owl – which was turned around in a week. Reddit’s communities had been in the news after members rallied around beleaguered gaming retailer GameStop, and boosted share prices. Reddit and R/GA wanted to celebrate that underdog spirit. And so they bought just a 5-second slice of airspace during the big game, simply posting a written message in the format of a Reddit post. There were 6.5 bn impressions, traffic spiked 25% and it was the most searched ad of Super Bowl Sunday.