Media.Monks’ Sir Martin Sorrell and Wesley Ter Haar talk to LBB’s Laura Swinton about why the future of talent is flexible and bright for doers rather than climbers 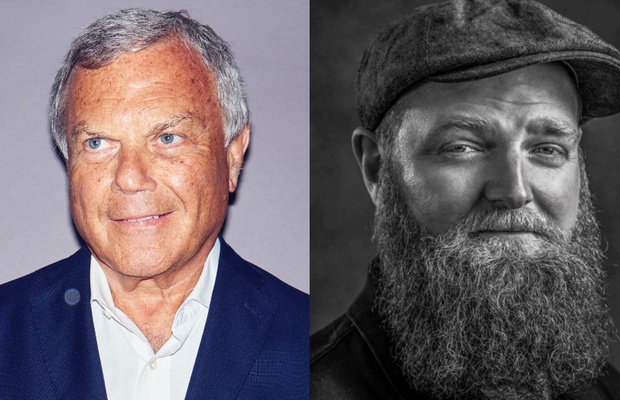 The cloisters of Media.Monks are swelling with brothers and sisters. As the company outpaces the competition, revising financial projections upwards and welcoming new companies into the flock, the digital-first advertising business is over 6,000 people strong. When it was acquired by S4 Capital back in 2018, its headcount was just 750.
With so many new monks, the leadership has resisted any temptation to rely on old school structures and hierarchies to organise talent.
The approach to building creative teams is centred on client needs and expertise rather than prescribed roles. According to Wesley Ter Haar, a founding ‘monk’ and executive director, there are also specialist hubs available to all clients. For example, they’ve pulled together a group of NFT experts in response to demand, interest and opportunity.
Wesley explains how it works: “We tend to spend a lot of time casting talent and teams around either industry or a certain passion for the product or service that we’re promoting. We tend to think about subject matter expertise almost more than traditional role definition because we feel that brings a lot more to the table. It’s more fun for our people and, from a work perspective, more interesting for the clients. It’s a lot of deep subject matter expertise cast against what the client either is or needs from us, and it’s a little less around the traditional roles.”
It’s an organisational style that favours flexibility over unwieldy structures. Talent isn’t siloed into different P&Ls and while the lack of predictable, familiar hierarchies might cause those institutionalised to the traditional advertising model a flutter of anxiety, ‘Senior Monk’ Sir Martin Sorrell says it’s what clients are asking for.
He says: “I think clients are clearly indicating to us and moaning about the amount of overhead that they had to pay and which they see loaded into the fees. They’re also concerned about the complexity of the traditional model. What you’ve heard from Wes’s answer was that we’re trying to simplify it… We’re trying to simplify the structure and process.”
Fluidity in this case isn’t about relying on banks of freelancers - they prefer to focus on full-time employment. According to Wesley, the benefits of this mentality are twofold. For one thing, clients appreciate the variety of expertise available to them and, for another, he says it means that everyone is incentivised to see the company do well, they’re open to jumping in and helping out other teams when needs be.

Media.Monks may have evolved into this data-driven, creative beast, going head to head with traditional agencies, but its production heritage has shaped the organisation into one that is focused on getting stuff made and moving fast. It’s now so much more than a digital production company, driven by its makers’ spirit and competing within a restless, content-hungry world.
“We’re looking for producers as well. Producers not in the creative sense but producers in terms of delivering,” says Sir Martin, who says the leadership is focused on results and delivering for clients. “The competition has become too heady… it’s rather like the civil service. The bureaucracy that they’re building up is huge and clients have to pay for it and they don’t get yield.”
It’s a culture that has always been pretty hands-on when it comes to new tech and platforms, making things using new tools rather than just speculating about them. All of which Wesley thinks makes them a more credible offering. “I think it’s easier for us, being at the cutting edge of being able to make all of the things, to move up the funnel is easier than it is to move down the funnel into that space. Now, we can provide most of what our clients are looking for. They’re looking for that performance, they’re looking at higher speeds to markets, they’re looking at gross efficiencies, but they want to be a digital native brand.”
Encouraging and recruiting for that maker mentality, Sir Martin says, is the key to Media.Monks’ scalability. “I think our creative people are technologically more savvy. You could describe it as on the cutting edge of things but I think they are much more knowledgeable about the intricacies of technology and are much less big picture. They're much more into the nitty-gritty and are able to execute faster and at scale,” he says.

If Media.Monks are backing makers and doers, are there any areas that they’re paring back? “From what I can see, I think we have reduced the account handling structure and we have simplified it. Most clients like to work with creatives, often directly. They prefer it; that’s when they see the value. I think we’ve simplified, ” says Sir Martin.
When it comes to strategy, while it’s important to the Media.Monks teams, Wesley and Sir Martin say the balance between thinking and acting is something that they’re constantly interrogating, given the demands of the always-on world.
“Strategically, there’s a great debate inside our firm as to how far you have to go on the strategic front in a digitally-dominated world or [whether] you have to do it in the same way. I think the structures that have been built historically just can’t cope with what you said about fluidity and responsiveness. Agility is the key corporate attribute,” says Sir Martin.

Agility is hamstrung by unwieldy hierarchies. There’s too much investment in the centre, thinks Sir Martin, as well as unnecessary layers. These bloated titles and management structures might frustrate clients, impede flexibility and divert resources from the makers, but they’re also, he suspects, paralysing for individuals.
“I think the industry invests far too much in superstructures,” he reflects. “I spoke to some guy this morning who works at one of the holding companies. And, you know, he wants to change his life, but although he hates what he's doing, he sticks around… I have had multiple conversations like that… You know it needs a good cleaning out.”
Of course, those structures and titles are industry norms so there can be something of an adjustment for people joining Media.Monks from a more traditional set-up. “I think we struggle with this when we hire from traditional companies. Everybody needs to be a global head of something. The title inflation is crazy but that’s the only thing the industry has been able to offer - major titles. So for us, it’s more about can we get people close to where they have an impact on the end result. Can they be close to where the work happens, be close to what the client needs.
“It’s much more decentralised, it’s a lot less of a pyramid structure. So I think we try and focus on getting our best people working as close to the client as possible.”
Throughout the conversation, there’s a lot of talk about pyramids and tearing them down - and end of the age of adland pharaohs perhaps. To which Wesley responds, with a one-liner worthy of Sir Martin himself: “Pyramids are tombs for talent.”

Looking to monks of tomorrow, Wesley says that he feels that the company owes its clients new and varied talent. That doesn’t simply mean ‘young talent’ - it means people from different industries, different cultural spaces, different ages - but at their core, they must live and breathe technology. They’re locals of the digital world, not tourists. He’s frustrated when he sees books full of posters at portfolio nights.
“I think the best creative talent, or just the best talent, can look at that context and where something is moving and find an angle on it. So the talent that tends to do well within our organisation is in the ecosystem. They’re on social, they understand what’s happening, and they can translate what the client wants to do into what is current and relevant in all of these spaces - which is a bit different than what is traditionally seen as the advertising process, where you take the big idea and see what it looks like as a thirty-second script, and then it’s like you have a set of matching luggage,” says Wesley. “We focus a lot more on what do want to pursue as a brand narrative and how we translate that to channels. So it’s about people being aware of what plays.”
The people who Sir Martin and Wesley believe do well within the organisation are those that are comfortable with some ambiguity, who are entrepreneurial and disruptive. All this talk of tearing down pyramids makes sense - the kind of people they’re hoping to attract are those quite happy living and working in the middle of constant changes. They’re building the future by living in the moment - not clinging to the edifices of the past.

Two Woke Girls: Why Are our Brand Films Failing the Bechdel Test?