After a surprise show at the Palais, Publicis NA CSO Carla Serrano and Global CCO Liz Taylor talk about how they pulled off an award show in a month and the importance of recognizing a creative North Star 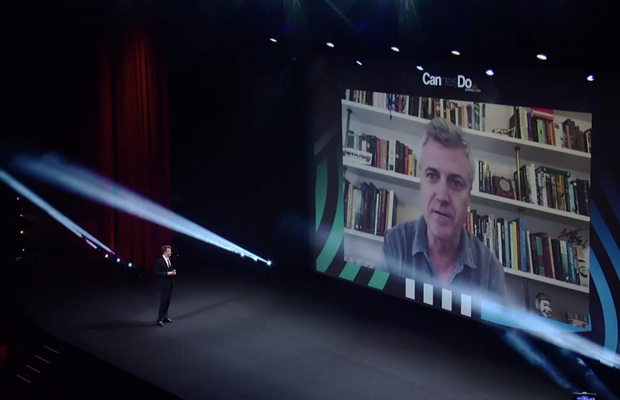 Like a pair of fairy godmothers straight out of Cinderella, Arthur Sadoun and Maurice Levy have descended on Cannes to tell the advertising world 'you shall go to the ball!'. Well, if you work for Publicis Groupe, at least. Over the past month, they've been working hard to create a showcase for the year's best work from across the Groupe that's worthy of the Palais des Festivals itself.

On Friday evening, the holding company screened an award show from a distinctively empty Palais, with Groupe CEO Arthur on MC duties and chairman Maurice Levy running sounds and lights as technical director.

“I know many of you will ask yourselves, ‘what are they doing in Cannes, when the world is facing such crisis?’ Well it’s pretty simple – we don’t want to give up what we stand for, what we love, what is the core of our business model, and we want to make sure that today we celebrate creativity in all it’s forms,” said Arthur, kicking off proceedings.

The Cannes-Do awards whittled down all of the work from across the 80,000-strong Publicis Groupe. 25 jurors from across the Groupe pulled together a shortlist and Publicis employees were invited to vote. Coming up top was Secure Your Account for Emirates NBD by Leo Burnett Dubai and  Bee_nfluencer for Fondation de France by Publicis Conseil Paris. Diesel received the Client Bravery Award for their consistently progressive and pioneering work.

There was also a surprising guest appearance from WPP CEO Mark Read who appeared onscreen to accept a special award. The aptly-named Entente Cordiale was awarded to celebrate a piece of work that was a partnership between the two rival holding companies – The Moldy Whopper for Burger King.

Explaining the reasoning, Carla Serrano, CSO of Publicis Groupe North America and CEO of Publicis New York said: “Moldy Whopper obviously did really well for a number of reasons. It’s a fantastic piece of work, it’s been recognised at other award shows. We just thought in the environment of the current climate is one of collaboration. We thought it was appropriate to celebrate that the work was done over three years and with two holding companies and  in the spirit of showing up together.”

And the cheeky show even addressed the elephant in the room… or shall we say the Lion that wasn’t in the room. When the trailer for the show was dropped earlier in the week, eyebrows were raised at the fact that the holding company that had boycotted Cannes Lions three years ago was the one turning up for its own show in the Palais. But Cannes Lions chairman Philip Thomas made a sporting appearance.

“Guys, do you remember the year you didn’t come to my award show? I thought it was probably appropriate that I didn’t come to yours in return. But wishing all the very best and I can’t believe you pulled it off and you’re actually in Cannes,” said Phil, appearing on the giant screen in the auditorium.

The show has been a labour of love for the Publicis Groupe leadership and a test of their much-vaunted internal AI platform Marcel. 1,400 pieces of work were entered from across 400 agencies, and the whole thing took just a month to pull off.

“I think the irony is that three years ago ,we launched Marcel in Cannes and told them that we weren’t going to Cannes, and this year we’re launching the Cannes-Do on Marcel.

We have the platform to do something like this across our 80000 people so it’s a little bit easier for us to create a global awards like this,” said Carla.

The awards also reflected other evolutions within the holding company. With no categories, the awards were able to showcase a range of creativity, and they have also been a chance for the Groupe’s recent big acquisition Epsilon to engage with the business’s creative offering.

The judging was a rather unusual experience – given the short turnaround, agencies were not required to pull together glossy case study videos and so the 25 jurors had old school entry boards, PDFs and written explanations of campaigns.

“There was a mix of the pre-Covid work that likely would have been submitted to Cannes, there was Covid work and mix across all the different types of work, so storytelling, innovation, media plans,” said Liz Taylor, CCO of Publicis Groupe North America and Leo Burnett globally. She also noted that Publicis Groupe’s internal Creative Collective and means that the holding company is used to coming together to share and assess work. “When it was first announced there was also a slew of creative panic about how do we get our cases ready in time, because we all want those worthy cases that were sort of put on hold and Arthur was careful to make an announcement that no one needed to go crazy and work holiday weekends if they didn’t have a case, as long as they could tell their story in a unique way.”

Despite the extensive planning and concerted effort from across the holding company needed to achieve something like this, Arthur and Maurice managed to keep the fact that the Cannes-Do Awards would be held in Cannes a secret. The first Liz knew about it was when Arthur sent her a photo from outside the Palais.

“The creative community , we love when people are willing to be self-deprecating and human. It’s a lighthearted way to celebrate creativity and so for the two of them to come out and poke fun at themselves as a buddy comedy and release the surprise , my favourite was when he texted me and it was the two of them in front of the Palais and I had no idea. I love the joy that the two of them have about doing something creative themselves. People have loved it.”

And the event is not just about celebration, there’s a serious, strategic aspect to it also. “I have to say that it is way, way more than just a celebration, there’s been so much strategic evolution, it is galvanising camaraderie and it’s that beacon of standard of the type of work we should all be trying to attain,” said Carla, who noted it was important for both the Groupe and its clients to have a creative ‘North Star’.

Looking forward, it also seems that Publicis might have inadvertently started something that becomes an annual event. “I think the anticipation and excitement we’ve gotten suggests that this may end up being something of a tradition for us,” said Carla.

1.    Secure Your Account for Emirates NBD by Leo Burnett Dubai

5.    Act for Food for Carrefour by Marcel Paris

6.    Trapped in the Flavorverse for Pringles by Starcom Chicago

7.    The French Exchange for Renault by Publicis•Poke London

8.    Daniel Craig vs James Bond for Heineken by Publicis Italy

9.    Keep Being You for Gilead by Digitas Health Philadelphia

3.    For Jason for Black is Human by Burrell Communications Chicago