Board creative director joins Irish jury for this year's competition 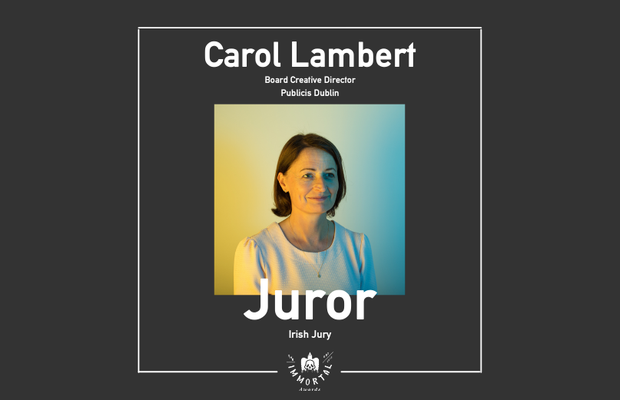 Publicis Dublin's Carol Lambert has been announced a juror at this year's Immortal Awards, joining the Irish jury.
Carol has over 25 years of experience in advertising and brand building. She is a board creative director at Publicis Dublin with a background in art direction.
Carol served as president of ICAD (Institute of Creative Advertising and Design) and on numerous ICAD boards. She also served on the board of IAPI and The Kinsale Shark Awards.
Carol has multiple award wins at various national and international creative award shows. She’s worked on many leading brands such as Heinz, Levi’s, Guinness, Eircell, Meteor, Vhi Healthcare, TG4 and Iarnród Éireann. Carol has judged at numerous award shows both nationally and internationally, sitting on One Show juries, Lisbon Festival and Cannes Lions.
The Immortal Awards 2021 Irish jury currently includes:
Anthony McCaffery, Executive Producer, RAYGUN, Ireland
Carol Lambert, Creative Director & Board Director, Publicis Dublin, Ireland
Catriona Campbell, Managing Partner, The Public House, Ireland
Deirdre Waldron, CEO, TBWA\Dublin, Ireland
Emma Sharkey, Chief Strategy Officer, Rothco, Ireland
Jake Walshe, Managing Director, Screen Scene, Ireland
Karl Waters, Creative Partner, Folk Wunderman Thompson, Ireland
Paul Holmes, Executive Producer, Red Rage, Ireland
Roisin Keown, Founder & Executive Creative Director, The Brill Building, Ireland
Rory Hamilton, Partner & Executive Creative Director, Boys+Girls, Ireland
Shane O'Brien, Executive Creative Director, BBDO Dublin, Ireland
Entries to The Immortal Awards are now open and Little Black Book members can make their submissions here today.
Entries into The Immortal Awards will be accepted until September 10th 2021. All entries must be made for a commissioning client, and must have first aired, broadcast, displayed, launched or published between 1st September 2020 and 31st August 2021.
Every member of LBB is entitled to up to five entries, depending on their membership tier. This year, Bronze members receive one entry, Silver members will receive two entries and Gold members will receive five entries. The full list of rules, including eligibility dates, can be found here.
If you’d like to enter the Immortal Awards but you’re not yet a member of LBB, sign up here today. If you’re already a member and would like to increase your number of entries, you can upgrade your membership here.

More from The Immortal Awards

Inside the Jury Zoom 2021: The Immortal Awards’ European Magnificent 7

Inside the Jury Zoom 2021: The Immortal Awards’ Final 4 from MEA That Represent Simple, Original and Powerful Ideas