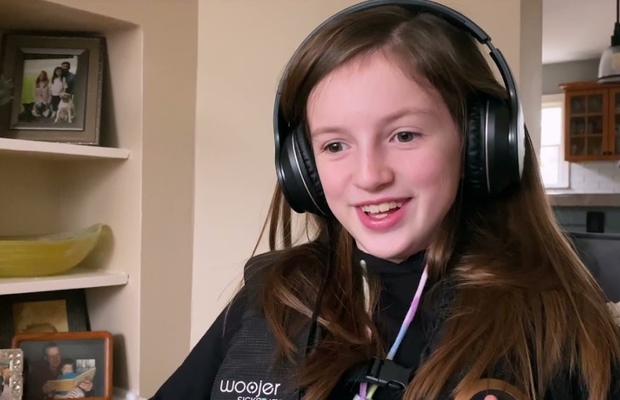 SICK BEATS by Woojer - the world’s first music-powered airway clearance vest for cystic fibrosis (CF) - uses the clinically proven modality of sound-wave therapy to merge the music kids love with the daily treatment they need, all on Spotify. It won numerous awards at Cannes Lions 2021, picking up the Grands Prix top honour in both the Pharma and Radio & Audio categories.

This idea wasn’t born out of a client ask. At AREA 23, our working model is called ‘What If’. Every employee is given free time to work on ‘holy shit’ ideas for their clients that we pitch proactively. Back in 2018, the team was talking about cystic fibrosis, and we were struck by how outdated current airway clearance vest technology was and wondered - what if we could improve the experience?
CF causes heavy mucus to build up in the lungs, placing people at risk for developing serious infections. Which means kids with CF have to depend on an airway clearance vest to help break up this thick mucus so they can cough it up. These vests are bulky and uncomfortable. They are extremely medical looking. They are extremely expensive - over $10,000. This is an objectively bad experience with huge room for improvement.
We spoke with kids with CF and their families and found that the kids felt like wearing the vest was the worst part of their day. They hated being stuck, strapped into a vest that used mechanical force to beat their chest over and over again for 20 minutes at a time.
No one likes to be hit or shaken. Especially a child.

It’s an interesting story. The original solution we had in 2018 was to take the current vest form factor and reprogram it to simply time the percussion to the user’s playlist. But on reflection, this was just making a bad experience less bad. You would still be pounding the kid’s chest. But then over time, the team started to see the emergence of new haptic technologies for gamers and audiophiles. These devices actually push sound waves into the body. Could this be the technology we needed? Upon further research, we learned that sound waves, in particular at 40 Hz, had actually already been proven to break up mucus. This was the breakthrough we needed! From there on out, it was all about partnering with tech companies, building the medical team, developing prototypes and testing them in-clinic, and all that fun stuff.
We went through many iterations of the idea. From using the actual existing vest form factor and synching it to music, to pivoting into the sound-wave-driven experience and going from prototype to prototype. There are many factors to take into account. The vest needs to be form fitting because the sound-wave-generating transducers need to be as close to the body as possible. We need to target the lungs, so the transducers need to be strategically placed. Then there’s the music, and how we apply the sound waves. Not a lot of songs have the 40 Hz tone, so we had to build a bot to listen to all the songs on Spotify to identify songs with the 40 Hz tone in them.
After spending a year developing the idea in-house at AREA 23, we got as far as we could take it as an agency. Then, in 2019, we landed a partnership deal with a tech company to build a working prototype and we were ready to go into clinical testing. Unfortunately, the Covid-19 pandemic shut the entire project down. The trial was shelved and the tech company pivoted to a different business priority. We weren’t ready to give up, and we approached Woojer with the idea. It was an immediate yes and, within a month, we had a minimum viable product.

Our biggest challenges early on were redesigning the consumer vest for a child’s frame and making sure the patented OSCI transducers were where they needed to be for maximum chest coverage and accurate placement. To more accurately target the lungs, we added transducers, placing them in precise locations around the chest cavity. We needed a total of eight-four in the front and four in the back. This added another problem to consider: power. So, we doubled the power supply to accommodate these additional transducers.
The real challenge was Covid-19! How do we pull off a complicated tech build when everyone is remote and spread across the world, from NYC to Israel? The answer was long Zoom calls and a committed team. Once we had the build sorted out, our next challenge was how do we get these vests to kids SAFELY? We had to sanitise each vest sent and teach parents how to become filmmakers while we documented their experience with the vest. Our production department was relentless in ensuring the families had the proper equipment and tutorials on how to use the camera equipment and the vest.
Our partners in all of this have been incredible. We approached Claire’s Place Foundation early on, and they immediately understood how powerful this technology could be for their community. We worked closely with Melissa Nordquist Yeager, the executive director and mother of the founder of Claire’s Place, to connect with families interested in trying the vest.
And here’s the really fun part. Recording artists are in love with this idea. They are coming out of the woodwork asking how they can help. And we have an answer. Help build our 40 Hz music library by recording original 40 Hz songs, or remix your top tracks to include the 40 Hz tone!
The curation of 40 Hz-heavy music was no easy task.
To curate the music, we applied algorithmic solutions, YIN and AMDF, and an AI-based neural network solution to determine song frequencies. Then, we accessed every song on Spotify that met our requirements of popularity, lyrical content and song length. The AI tools ‘listened’ to the music and found tracks that fell within the 40 Hz therapeutic range, and those songs were then used to build Spotify playlists based on the listener’s mood and musical preference.

The testing of the SICK BEATS vest was really done by the families we connected with through Claire’s Place Foundation. We sent the families vests to try out to learn more about the kids’ experiences and determine any modifications we would want to make for future improvements. Ultimately, we want to produce the best possible version of this vest so the kids could have an exhilarating experience.
One of our bigger issues was making sure the kids still used their traditional airway clearance vest while they were trying out SICK BEATS! Because the SICK BEATS vest still has to go through a clinical trial, it was important that the kids stuck to their daily treatment with their existing vests. They kept telling us that they would much rather use our SICK BEATS vest because they were having so much fun.
Based on what we are learning from the families who are trying out the vest - and that experience trial is still ongoing - the Woojer product development team are working on a new, even more comfortable form factor, featuring stretchy material that will allow a great fit for smaller builds.
Also, since our launch, premier recording artists have been coming out of the woodwork wanting in, offering to curate playlists and create new songs. To help them out, we created an open-source tool kit so musicians can create original 40 Hz songs or harmonically enhance their catalogue for use with SICK BEATS.
For me, it is the ability to give these kids something that can not only help keep them alive but help them FEEL alive. I lost a high school classmate to cystic fibrosis many years ago, and when we started on this project, I was shocked by how many people had a similar story or who knew someone with CF. The technology and the build have been a fascinating and exciting experience, but nothing really compares to seeing these kids light up when they try the vest. We often talk about life-changing work, but the SICK BEATS vest can be truly life changing for many kids and families.
According to our medical directors, the SICK BEATS vest has the potential to completely transform airway clearance therapy - the ability to create a FUN experience could significantly impact clinical outcomes in a population that may struggle with compliance. The SICK BEATS vest could completely disrupt the airway clearance vest market by providing an experience that is as effective as the best vest out there but that provides an awesome experience any kid would love.