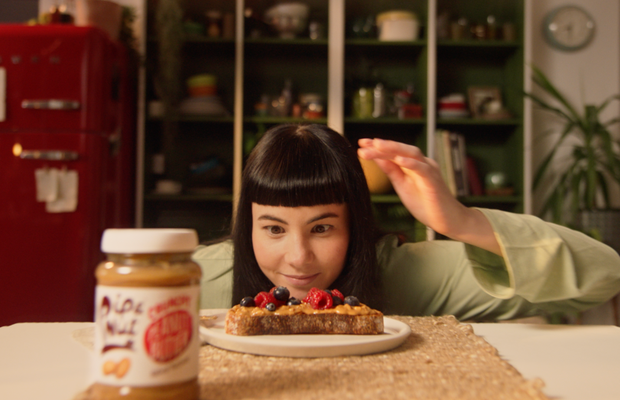 Pip & Nut launch their first ever TV ad with creative partner Who Wot Why to drive awareness of their award winning range of natural, palm oil free Peanut Butter.

The ‘Pipirazzi’ ad focuses on the insight of Pip & Nut superfans who love eating nut butters but are equally as obsessed with taking pictures of it too. In the ad, a Pip & Nut fan is seen full of energy, leaping around her kitchen to get the perfect photo of her peanut butter on toast. The obsession she shows towards her Pip & Nut breakfast is likened to the paparazzi as she snaps the toast like a celebrity before she shares it on social media. The audience is asked to make every breakfast a show stopper and join the Piparazzi.

The brand has observed this cultural phenomena for sharing food content grow during lockdown as people spend less time commuting and even more time eating at home.

Pip Murray, founder of Pip & Nut says “I’m so excited to share our first TV ad - I started the brand in 2015 based on my sheer obsession with peanut butter, so it feels only right that our first ad should capture this spirit. It feels more important than ever to create and enjoy food you love.’’

WWW’s work for Pip & Nut puts the brand’s legion of devoted super fans front and centre. The latest campaign builds on WWW’s 2019 ‘Superfans’ OOH campaign where Pip & Nut-obsessed squirrels brought to life the social posts from equally obsessed Pip & Nut fans.  Who Wot Why worked with up and coming director Silence from Curate Films to shoot the ad. The ad will air on Channel 4 from mid February and will be supported by 360 activation by the inhouse Pip & Nut team across influencer and social media.

Creating film communication for Pip & Nut has given Who Wot Why a chance to really bring the personality of the brand to life and take the campaign to the next level.

Matt Gooden at WWW says : “The work we’ve created has always put Pip & Nut’s passionate fans front and centre. Why make this stuff up when the fans say it all?  If you’ve got taste buds and a lust for life, this stuff is your staple food…but not just any old M&S food, this stuff drives you bloody crazy…”