Paddy Power Asks Ireland for the Impossible In Euros Campaign: Stand Up For England

The Public House is back stirring up mischief with Paddy Power, pitting loyalty against philanthropy, in Ireland’s only Euros campaign 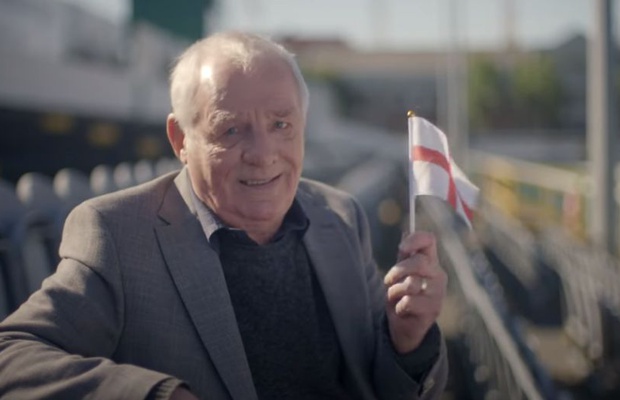 Paddy Power enlisted The Public House to build a campaign around their ‘cash for goals’ promo, which will see the Irish mischief makers donate €10k to amateur Irish football clubs every time England score in the upcoming European Championship.

Named ‘Save our Game’, the campaign asks Irish football fans to park their allegiances and explore the depth of their loyalty by doing the unthinkable - backing England. The inclusion of a few former ‘boys in green’ in the England squad won’t make this request any easier.

The campaign kicked off with a pitch-sized statement of intent, a 100m x 65m English flag planted at one of Irish football’s most beloved homes - Bray Wanderers’ Carlisle Grounds.

Out-of-home, national radio, social and reactive comms will drive awareness and keep a tally of the donations throughout the championship. Every goal will be a chance to put the so-called 'best fans in the world' to the test.

Colin Hart, creative director at The Public House, said: "We wanted to create an idea that would give Irish fans something interesting for the Euros. In the absence of that we created this campaign in conjunction with the chivalrous team at Paddy Power. The challenge; will you do something that hurts every part of your body to do something that genuinely helps!"

Paul Mallon, head of brand, Paddy Power, said: “For a particularly ‘green’ brand such as ours to go down this route was quite the stretch. Previously with The Public House we’ve nailed our colours to the mast with Colm Meaney for Cheltenham, and caused a bit of a stir with a rugby ad that trolled England. We thought it was time to readdress that balance and show a bit of love for our nearest neighbours – but of course there’s a bit of a rugpull.”

Sarah Walsh, strategy director at The Public House, added: “When we spoke to Irish football fans, they were gutted to be missing out on the craic and fanfare that comes with having a team in the Euros. Paddy Power’s mechanic gives fans a much needed excuse to get involved in the Euros and back a team...just not the one they would expect!

The campaign for The Public House continues a successful year with the growing independent creative agency’s clients include EPIC: The Irish Emigration Museum, FBD and Paddy Power.

The agency is known for its strategic rigour and creative edge that delivers for its clients, with a principle that ‘Boring Doesn’t Sell’.