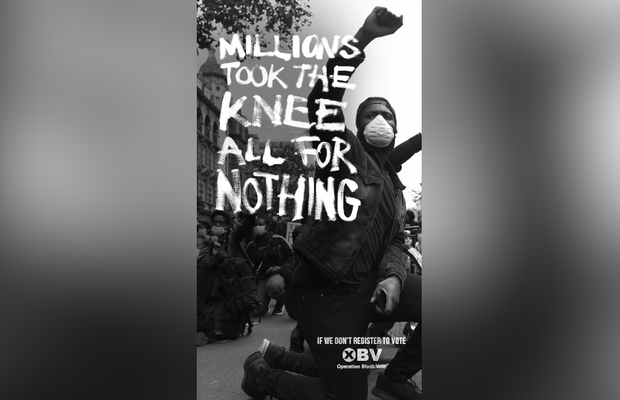 In the UK, the 6th May sees the first major vote since George Floyd’s murder nearly one year ago. However, ethnic minorities still show worryingly low levels of registration compared to the national average. BAME non voter registration is at 24%, compared to 6% in white communities.

If people aren’t registered by Monday 19th April, they will not be able to vote.

The campaign focuses on the importance of registering to vote and delivers a stark message. By not exercising a power to vote, the 200,000 people that attended mass rallies, the 135 arrests, and the on-going campaign to tackle racial injustice, can be seen as ‘all for nothing’.

Lord Woolley, the founder and director of Operation Black Vote is actively pushing for greater voter registration in the BAME community.  As part of his ongoing activity in this space, Saatchi & Saatchi developed the “All for nothing” campaign to drive awareness and help support the movement.

Operation Black Vote is urging underrepresented people, not just Black, Asian and minority ethnic individuals, but also young people too, not to underestimate the power of their vote to help create real change.

Saatchi & Saatchi is also building conversations and awareness through Clubhouse, and across various podcasts.

Lord Woolley said about the campaign: “Voting absolutely makes a difference. Look no further than what occurred last November in the US. The voters voted for an end to racial division, and for racial equality for all communities. We’ve seen people here protest for change.  The most radical political act you can do, is to register to vote, use your voice, and vote.”

By registering to vote, using your voice and voting, you let all the political parties know, that we want our lived experiences acknowledged, and where systemic inequalities persist to be effectively dealt with it. Lord Woolley argues that only when you understand power and effectively use it, can transformative change occur.

Lord Woolley added: “Since Covid-19 and the death of George Floyd millions of people have protested for change, systemic change that will tear down barriers and unleash talent, particularly for young men and women and those from Black Asian minority ethnic backgrounds. The crucial way we can create the change we desperately want to see, is through voting. It is a small individual action, that can have a huge collective impact.”

Elections have the potential to impact everything. Healthcare. Law enforcement. Social services. Education. All of these issues can be transformed, for better or worse, through political power.

Sarah Jenkins, managing director at Saatchi & Saatchi said: “We cannot let last year’s progress stall, nor underestimate how small but consistent and collective actions, like voting, have the power to transform society. The agency was already on its diversity journey but since the killing of George Floyd we’ve had eight months of accelerated education, engagement and brutally honest conversations as we looked at how we could be better anti-racists in a changing world. Our industry has the power to create change on a societal level. The revolution has many lanes. The only wrong thing to do, is to do nothing.”

Saatchi & Saatchi partnered with Prodigious on the production of the campaign and MSL has handled all PR activity.

Guillermo Vega, CCO at Saatchi & Saatchi added: “It’s been so important that we have again been able to point our energy and creativity at such an important topic. Operation Black Vote is at the heart of galvanising an underrepresented community to take action and use their voices through voting and we are proud to support them in any way we can. As industry we have a lot to do when it comes to diversity, but there is nothing stopping us all putting our collective creative minds to addressing this issue, and creating the change we need to see in society.”

OBV is a not for profit, non-party political organisation focussed on voter registration and getting the vote out, political mentoring and nurturing leadership. Its foundations are based on the four pillars of education, participation, representation and equality promotion.