The director and co-founder of Thomas Thomas Films on his art exhibition - 40 portraits depicting the likes of Anna Friel, Mark Denton and David Threwlis with objects that helped them through the pandemic 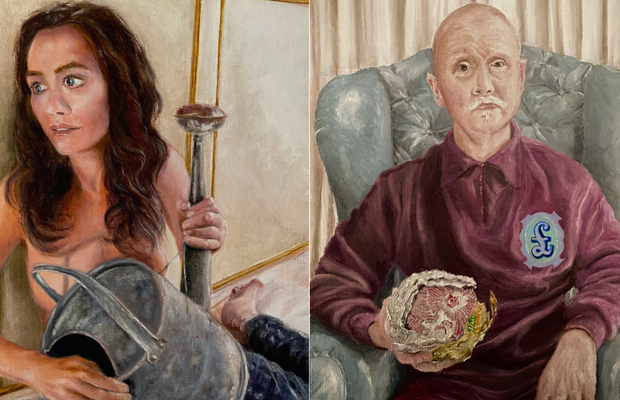 Kevin Thomas, Emmy Award-winning film director and co-founder of UK production company Thomas Thomas, has created an online gallery of 40 pandemic portraits of a diverse array of people – from a health worker and Thai cab driver to a sex educator-come-adult entertainer, by way of actors David Thewlis and Anna Friel, and fellow director Mark Denton.
The project, titled Twenty Twenty Thing, is live on Instagram with prints of the portraits soon to be sold and a percentage of proceeds going to charity.
Though Kevin studied graphic design as a teen, he’d barely painted since. But with film sets closed by last year’s first lockdown he picked up a paintbrush. Due to the UK’s Covid-19 restrictions, the 40 portraits he went on to paint – each featuring the subject holding something that helped them get through the past turbulent 18 months – are based on selfies taken by the subjects themselves.
Mark Denton, for example, is painted seated in his armchair holding a foil ball made from the coloured wrappers of all the chocolates he ate during lockdown. Anna Friel – an old friend of Thomas’s – poses naked from the waist up with her modesty protected by the watering can she’s used through the pandemic to tend to her prized roses. Thewlis, another friend and co-collaborator on Kevin’s 2014 short film ‘Sunday Roast’, is painted holding his favourite guitar, which he calls “his oldest friend”.
LBB’s Alex Reeves chatted to Kevin about the project. 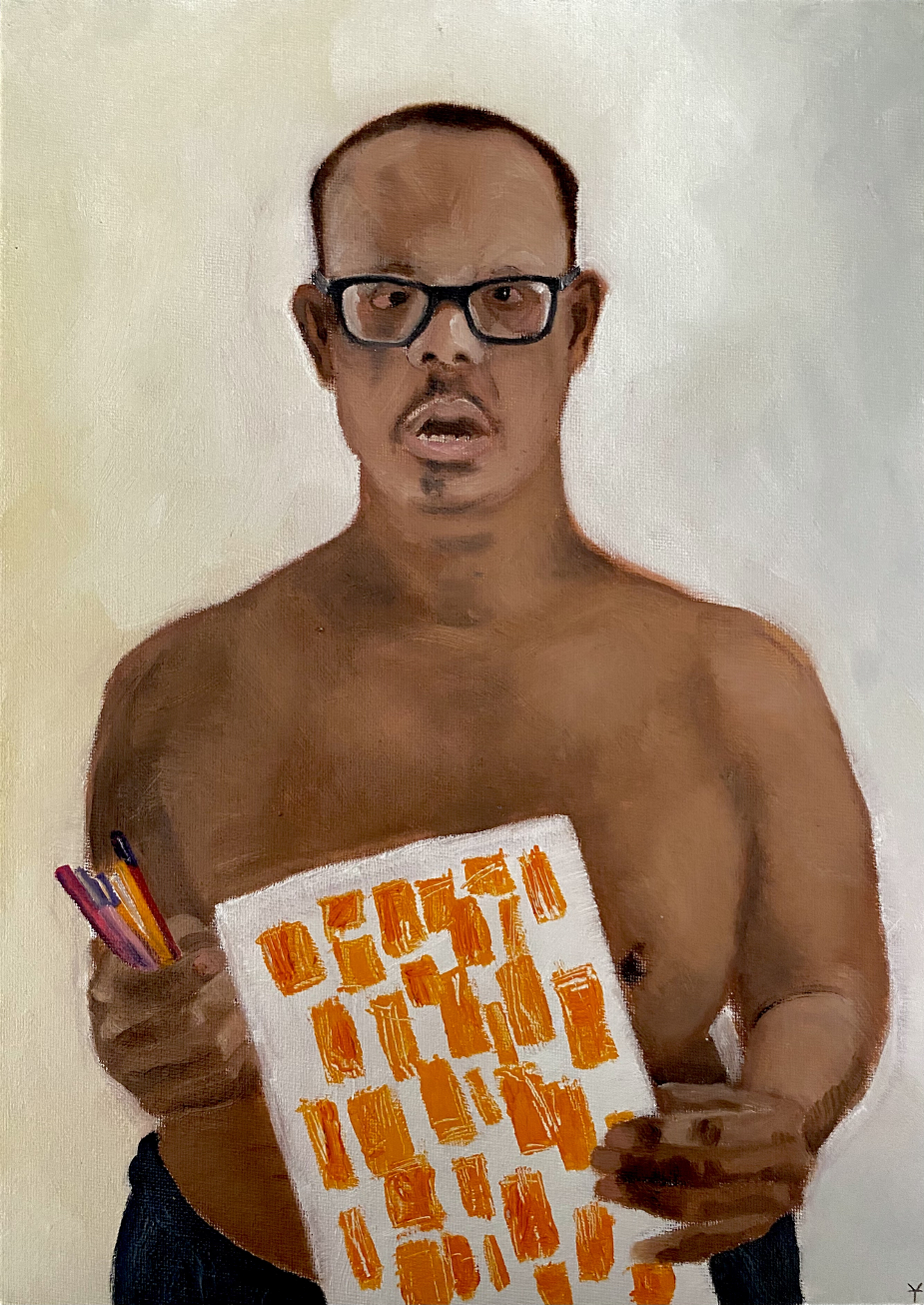 LBB> When did you learn to paint and what were your early forays into art?

Kevin> I hated school and always struggled. I'm ADHD and dyslexic, though of course those words didn't exist back then.
I bunked off all the time.
I wanted to be a hairdresser and in my final year of school I worked part-time in a hair salon.
Art was the only subject I never bunked off and that’s because my art teacher believed in me and spoke to me like a real person.
So, when he said: “Don’t be a hairdresser, go to art college”, I listened.
If it wasn't for Mr. Hinchcliff, I'd probably still be sweeping hair. 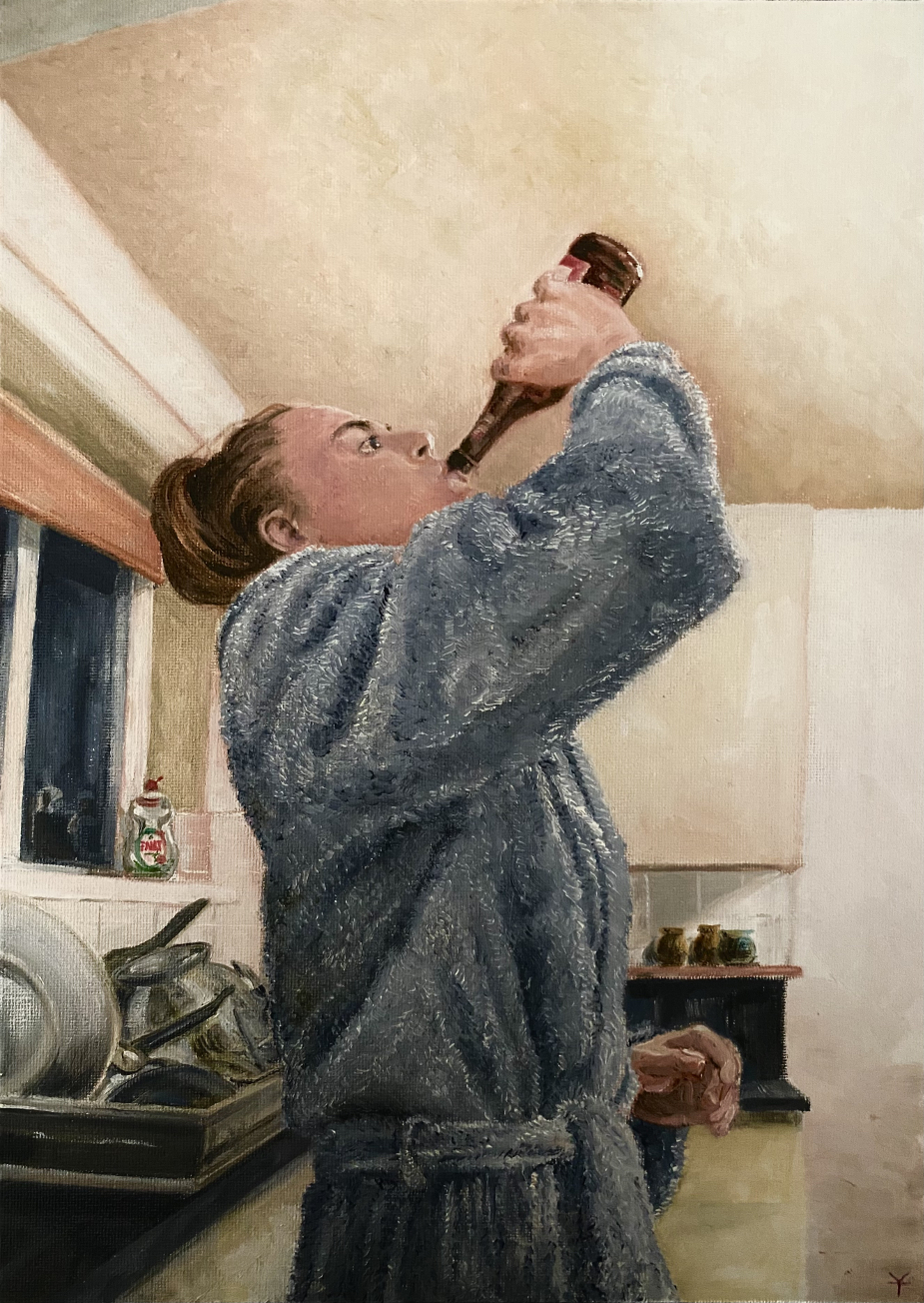 LBB> What were the factors that prompted you to pick up a brush again in 2020?

Kevin> I had time.
As a director I feel I am a storyteller.
I don't think it’s a big leap to start painting, because each of my portraits is also a story.
So, in a way, I’m doing the same thing I yearn to do, but in a different medium. 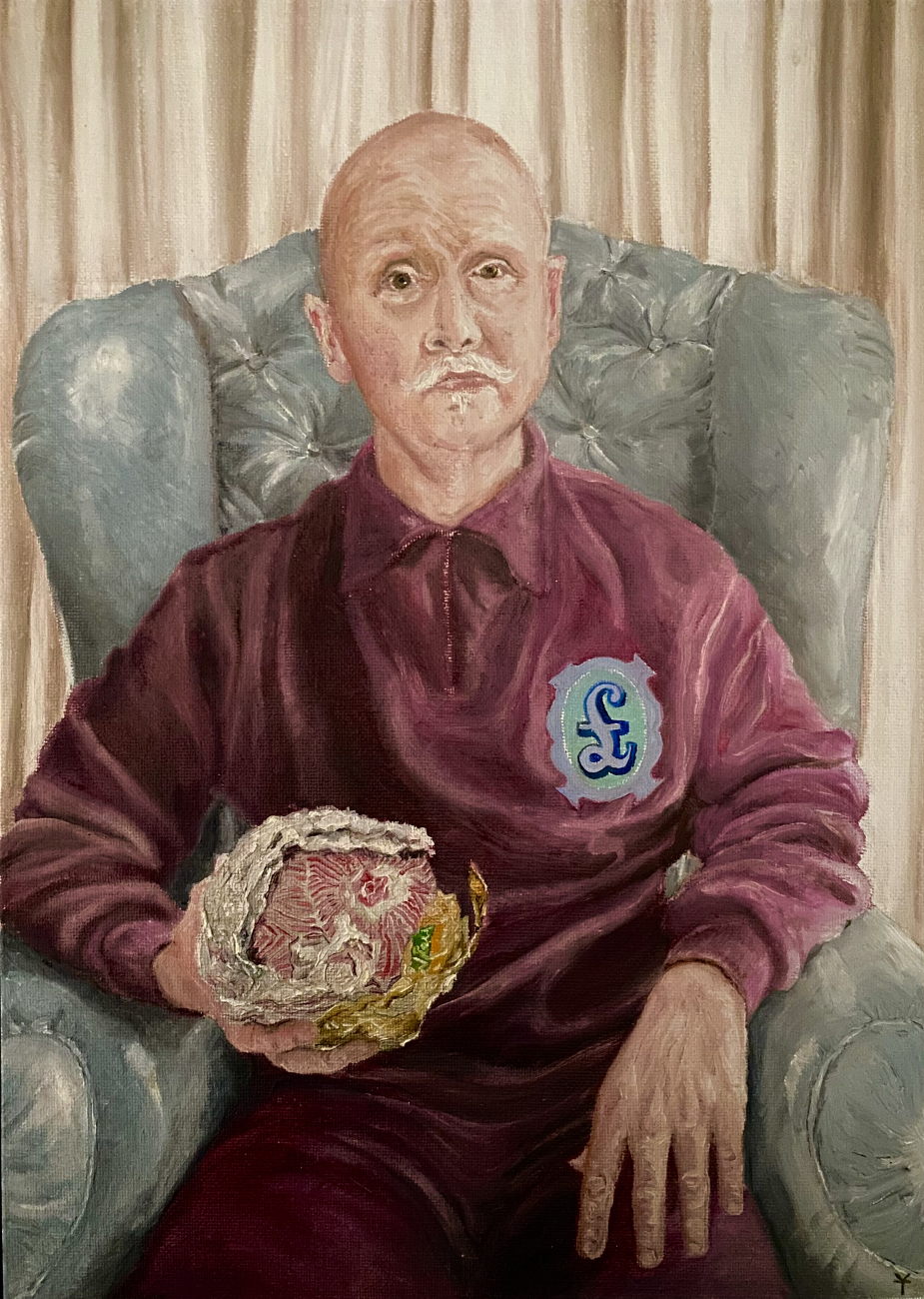 LBB> Did you have a clear idea of what you wanted to achieve in the project or was it something that took a while to work out?

Kevin> I knew that 2020 was going to be a huge moment in our history as a species. I still do.
I wanted a record of it.
And I also knew I wanted a wide and diverse group of people in terms of age, race, nationality, culture, gender, and status.
I gave everyone the same brief:  'If there was one object that has been something of a saviour to you during lockdown, what would it be?'
I still don't know if I've created 40 pieces or art, or just one.
Individually I'm pretty happy with them, but collectively I feel that such is the diversity, it’s a bit like one big 2020 diary for the human race. 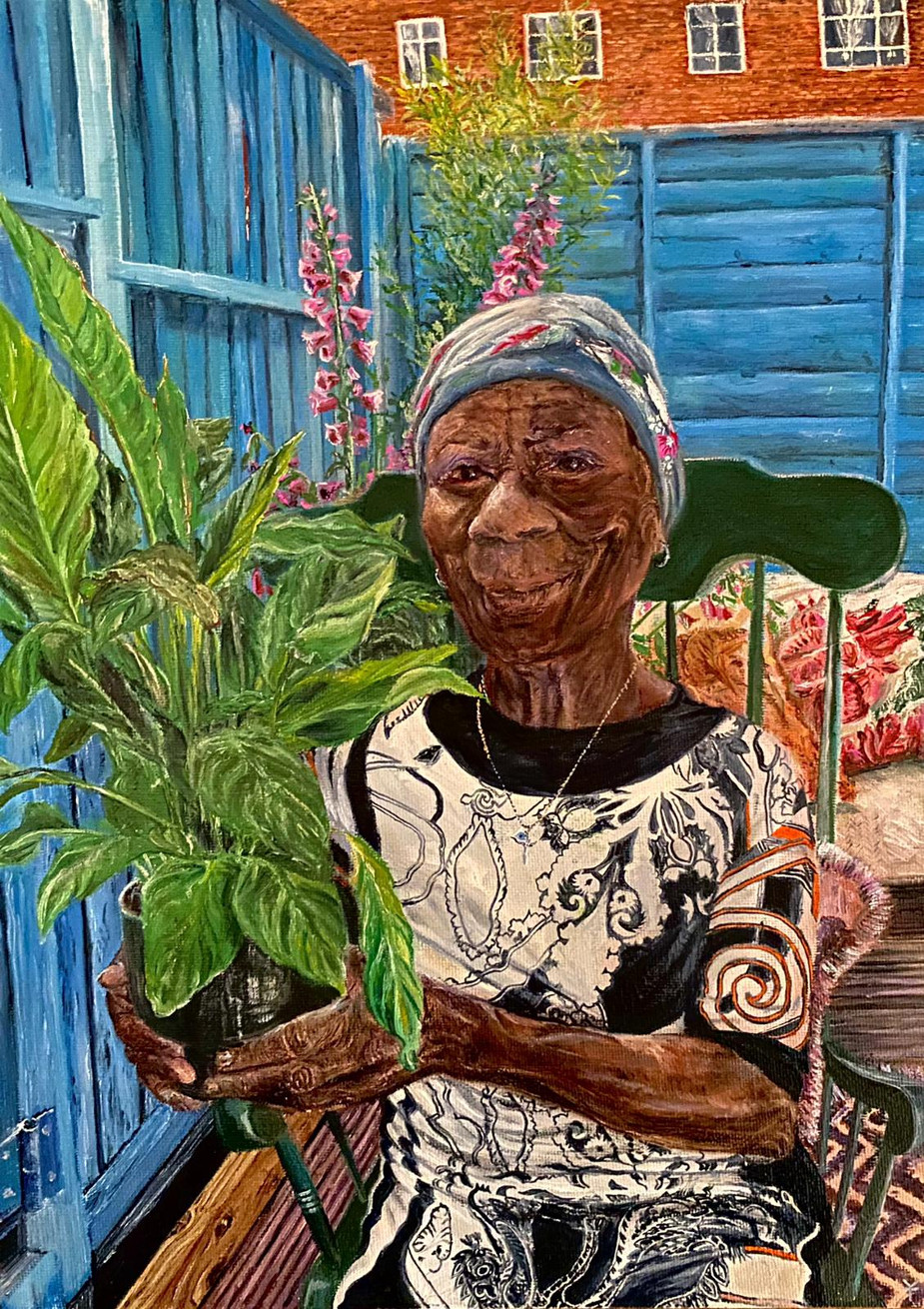 LBB> What was the hardest part?

Kevin> I'm not technically the best painter in the world. I paint heads too big for bodies and noses too big for heads, but who cares? For me, it’s all about capturing the emotion.
When people say: “I can really feel that person”, for me it’s a much greater compliment than: “Wow, it looks just like them”. If you want ”just like them”, take a photograph.
I think I am an emotional person who wears their heart on their sleeve, so I zone in on the emotions of others, and capturing those can be hard. But it's rewarding when it works, not just the finished article, but the process.
When I paint a person, I try to imagine being them. Even if I only get a tiny step towards being them, it’s enough to create a connection with that person. And if I can somehow emotionally connect, I feel I capture something in the painting, even if the nose is too big. 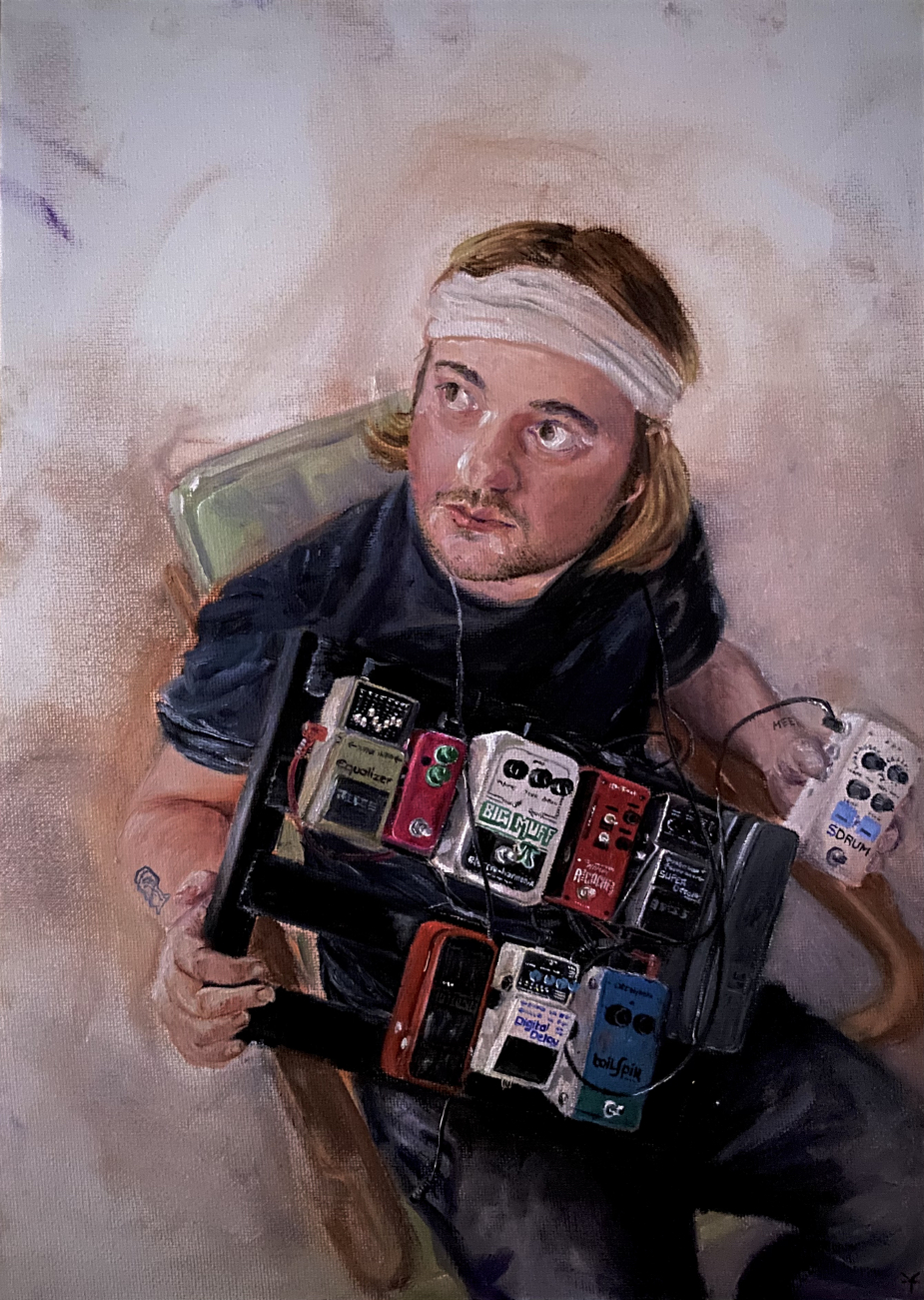 LBB> What did you find most interesting about the process of painting 40 portraits? There must have been similarities and themes that emerged.

Kevin> Each portrait had to tick three boxes.
1) There had to be something about the person that triggered something in me where I'd want to paint them.
2) The object they chose had to be of interest.
3) Finally, but perhaps most important of all, the relationship that person had with the object was crucial, because that was basically the crux of the idea.
There were a few people that had just been bingeing on Netflix and their chosen object was a remote control. I didn't feel I wanted to paint those people because it wasn't very inspiring for me to paint, or for others to look at.
I probably could have done 40 portraits of people with their cat or dog but being an artist who only paints people with their pets I imagine feels a bit like being a photographer who only photographs weddings.

LBB> How did you find your sitters? I know some are your friends but how about the others?

Kevin> There are only three or four people in there whom I haven't met but were friends of friends so in some way I knew about them.
Otherwise, they are all people I know either a little or extremely well.
However, some of the people I know best declined to take part but I don’t take it personally.

LBB> What were the discussions about the objects like? Some are more obvious than others.

Kevin> There were no big discussions.
I didn't want to help the person come up with it or sway it at all.
Some people gave me a few to choose from.
Some people tried to overthink it and I had to say: “If you are thinking that hard about what your 2020 object would be, then it wasn't really your 2020 object.”
Some people chose something deeply personal and meaningful.
Some went for something practical.
Some people went for something as dull as a cup of tea. If they had been drinking more tea than usual and it had helped them, then that’s great.
Some people took the 'thing' less literally and chose an object which metaphorically illustrated an emotion or state of mind, like Anna Friel and her watering can. The watering can itself isn't her thing. It’s what that watering can symbolises. 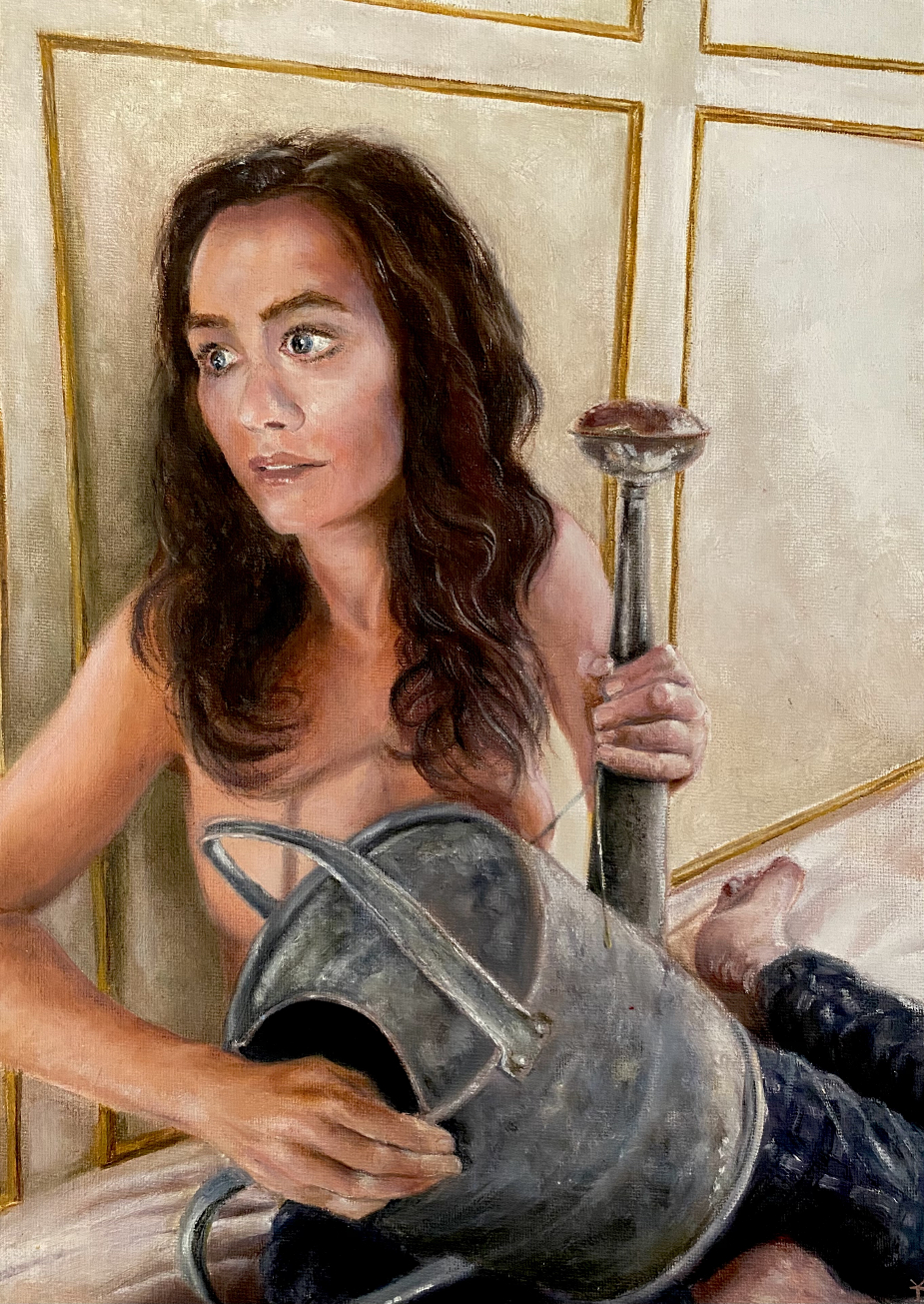 LBB> Do you have any particular favourites and why?

Kevin> I like the paintings of my two sons Tuppy and Ned because I feel their struggles every day. I think late teens or early 20s (which were once felt to be some of the best years of our lives) are today some of the most difficult.
I like the Llyrio painting because he was the first person to pick a 'thing' that's less tangible and something you couldn't hold.
I like Simon who has Down's syndrome who draws rectangles all day, because it’s one of the simpler, yet expressive paintings. But I also like Miss Brown because she's one of the more complicated and detailed pieces.
I like different paintings for different reasons.
Mark Denton takes the prize for having the most creative 'thing' - his foil wrapper ball.
I also like some I haven't posted, such as Roger, my father-in-law, who in 2020 was diagnosed with dementia. His 2020 thing is an object you couldn't imagine. 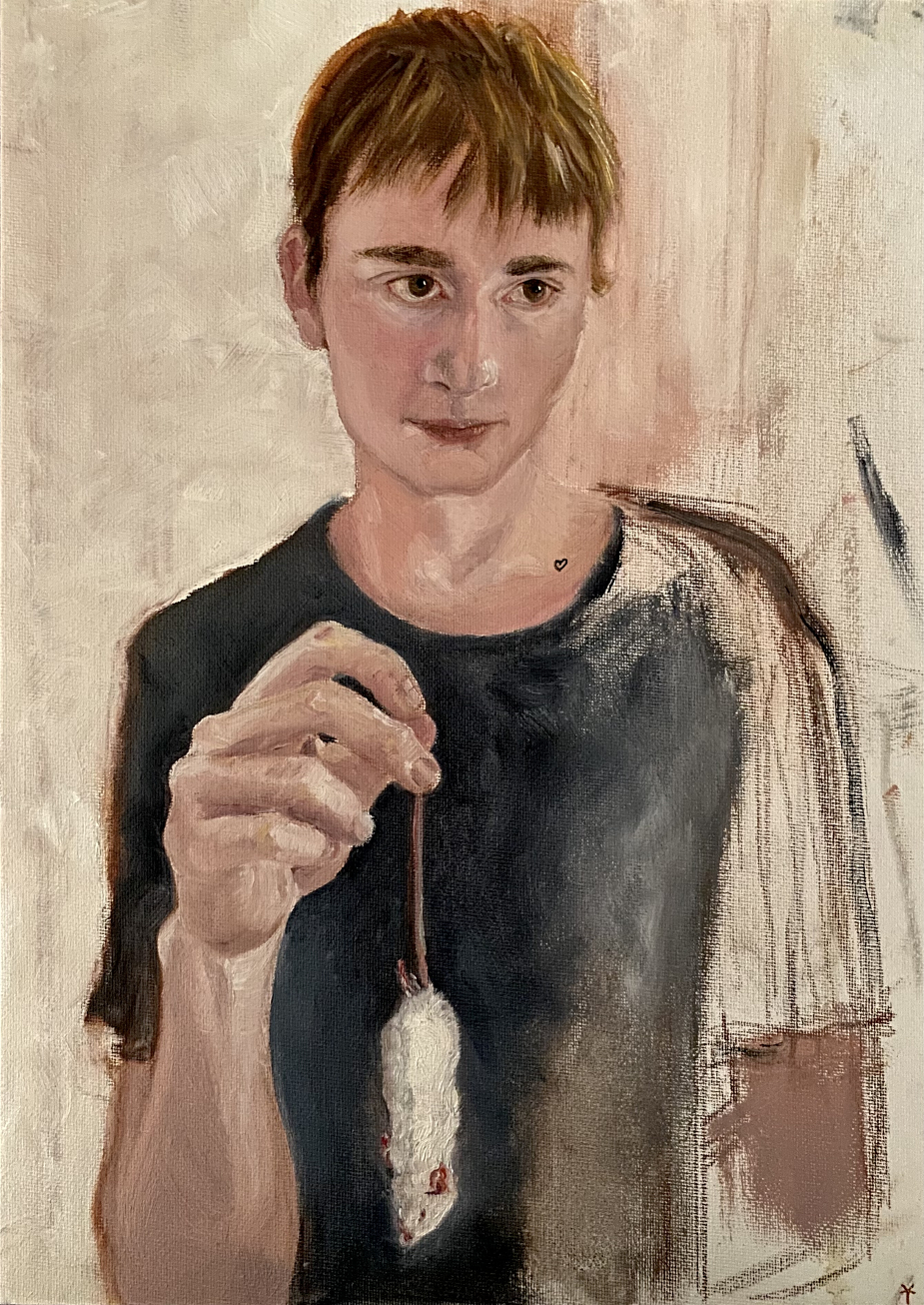 LBB> How has the project affected you? Have you changed as a result, whether profoundly or superficially?

Kevin> It was genuinely very emotional at times.
I often paint throughout the night, music blaring, and I get a bit lost in the moment.
Some of the stories are about personal tragedy, and even the less dramatic ones - stories of loneliness, isolation, and the strains on mental health - had quite an impact on me.
But I don't think of this as something sad. Even though there is a profound melancholy littered throughout, in the end it leaves you with plenty of hope and optimism.