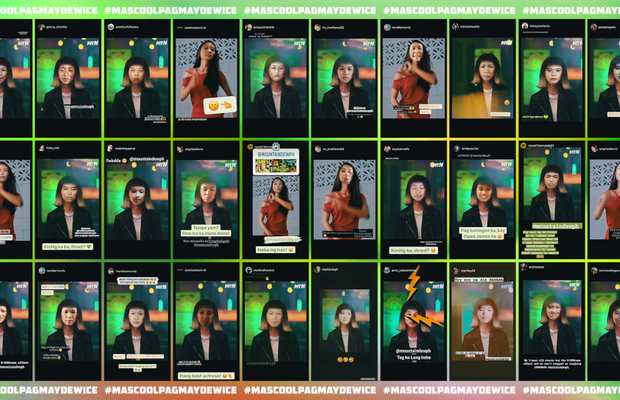 You’d think that it doesn’t get any cooler than ‘viral’, but Mountain Dew Ice and its latest meme-fuelled campaign beg to differ. Supporting the initial three launch films by creative agency BBDO Guerrero, Mountain Dew Ice released 'meme-generating' augmented reality filters on Instagram to share the fun to its followers.

The filters use face-swapping technology to let fans own that ‘mas cool’ (cooler) element in their own amusing way—by inserting their faces over choice characters in the popular online films and literally turning themselves into a meme. These filters were inspired by the two out of the three launch films for Mountain Dew Ice which puts a hilariously cool refresh to some of the most famous local memes and viral content — from sappy K-Drama scenes to cheesy dance challenges with your jowa (boyfriend).

The comical filters coupled with joke-filled influencer activations continue to spark a barrage of user-generated content, witty memes, GIFs, and creative online responses that have yet to slow down. Find the filters here and here.

“We wanted to create something that wasn’t just funny and attention-grabbing but resonated very strongly with the market and of course - the times,” David Guerrero, BBDO creative chairman says. “Mountain Dew Philippines is very much tapped into youth culture. And with all of us consuming and generating more memes and viral content than ever, it felt fitting to capture this generation’s spirit through the lens of the Internet.”

The three prior films deliver a wacky yet strikingly accurate parody that claims—literally and figuratively—everything is “mas cool ‘pag my Ice” (cooler with Ice), especially when hit with a burst of Dew Ice and its refreshing lemon-lime goodness. Together, the online videos have already racked up over 14M views, becoming the most shared and viewed content in Mountain Dew Philippines history and paving the way for a truly engaging, digitally native campaign that has the Internet in stitches.

“There has been an outpouring of engagement and praise for our “Mas Cool ‘Pag May Ice” campaign presenting such a bold and unconventional take on modern Filipino meme-culture. From polarizing online debates to the full-on explosion of fandoms—the reception of all three videos has been absolutely thrilling, to say the least,” Mikey Rosales, PepsiCo Marketing Director shares on the campaign’s massive positive response.