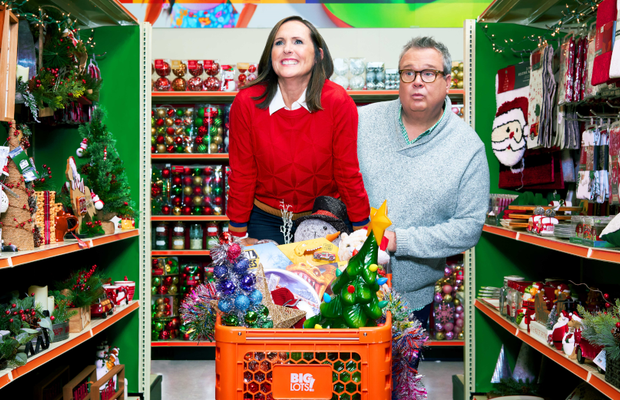 The campaign is called ‘Have-It-All-Idays’ and is a continuation of the BIGionaire platform launched earlier this year. The new work features new talent to the brand Eric Stonestreet (Modern Family) and Molly Shannon (Superstar).

Tombras, which first launched the BIGionaire campaign with Retta (Good Girls, Parks and Recreation) in May, is back with new spots and new talent - this time with double the starpower to reach the holiday audience. Eric Stonestreet and Molly Shannon star in the light hearted BIGionaire “Have-It-All-Idays” spots, with the comedic chemistry and quips between the two just as you’d imagine.

‘BIGionaire’ is all about community, letting everyone know they are included. From the jump, Tombras asked ‘Who will the next BIGionaire be?,” never beholden to just one.

Holiday season at Big Lots is too much for one person to handle - and with data showing this holiday season is going to be big - Tombras entrusted Stonestreet and Shannon to tackle the job together and reach the "loud and proud" Big Lots customers.

The BIGionaire “Have-It-All-Idays” campaign promotes not only the holiday season at Big Lots - but also that Big Lots is open on Thanksgiving day for all those looking to beat the Black Friday rush.

In line with the first BIGionaire campaign, Tombras sprinkled quirky one-liners throughout the spots:

The work runs across TV, CTV, Social, and online video through the end of December.

“This holiday season is particularly unique for a number of reasons, not the least of which is that consumers are back out in the world living their lives. For us that means standing out with fun, relatable work is more important than ever before,” said Becky Ziegler, VP marketing, Creative at Big Lots. “Over the last six months, we’ve dramatically changed how we appeal to consumers, and this campaign builds on that perfectly.”

“Molly Shannon and Eric Stonestreet are two of the funniest, approachable Bigionaires out there, and their ability to take what we put on paper and make it their own speaks for itself,” said Dooley Tombras, president. “We saw such positive results with Retta, that bringing two even bigger stars to the table is sure to cap the year off for Big Lots.”

TX Whiskey Makes the Most Texan Holiday Possible with The Briskurkey