With Formula E being held in Rome, for the first time ever the MINI Electric Pacesetter will star as the Safety car 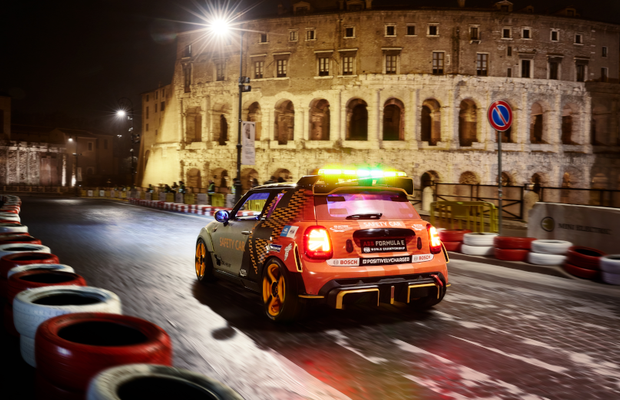 The city that most of any other tells the story of an ancient and glorious past becomes the setting for the most futuristic challenge ever: The Electric City Challenge.

Two vehicles will be competing in an electrifying head-to-head contest between St Peter's Basilica, the Theatre of Marcellus, Castel Sant'Angelo and EUR: the MINI Electric Pacesetter inspired by John Cooper Works model and Rome’s Underground.

The car was created from the new MINI Cooper SE as part of an unprecedented collaboration between MINI Design, BMW Motorsport, the FIA and Formula E.

It's a full-electric MINI that seems to come directly from the future, able of accelerating from 0-60 in 6.7 seconds and 0-60 in 3.6 seconds.

So here it is competing with one of the city's best-performing electric vehicles: the Underground.

"It was thrilling to bring this epic challenge to life. It is a perfect example of Reality Advertising, a communication language that we have invented and perfected over the years, which, starting from a real event, allows us to generate content for all kinds of assets.

The distinctive value of this method is that we don't just shoot a simple commercial but make people live a real experience, unique but exceptionally repeatable," said Vincenzo Gasbarro, ECD and Partner of M&C Saatchi and director of the film.

"It has been a long and complex project, but seeing it finally realised gives us back all the energy and passion that we have dedicated to it".

The campaign is on air from today all over the world.