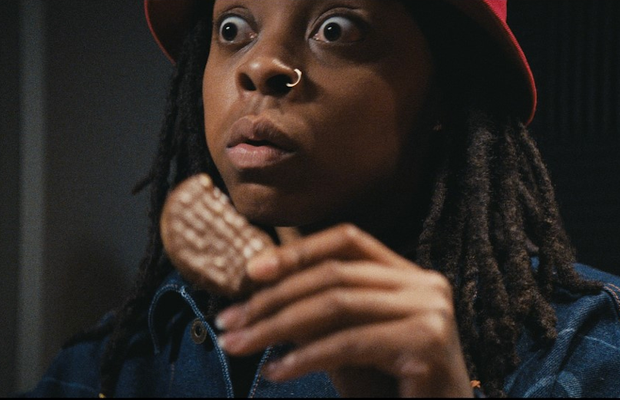 TBWA\London has devised a new creative platform for McVitie’s as part of a masterbrand relaunch. The idea for the long-running campaign, which launches this week, is that McVitie’s Chocolate Digestives biscuits are so overwhelmingly tasty, they're ‘too good not to share’.

The campaign features TV and social activity at its core, with the first TV spot telling the story of a radio station runner who takes a bite of a McVitie’s biscuit and becomes overwhelmed with the taste and the desire to share the biscuits with anyone in the near vicinity.

Unfortunately for him, given it’s his first day on the job, the closest person happens to bethe guest Grime Artist whose performance is about to be broadcast live on national radio. The sheer compulsion to share a McVitie’s Chocolate Digestive stakes over, and he tempts the Grime Artist into taking a bite. Impaired by a mouthful of the chocolate biscuit, she emits some rather surprising sounds live on air, to the bewilderment of all the station’s listeners around the country.

Complementary social activity breaking in December will nod to the fact that it’s not so easy to share biscuits with friends and family at the moment. Consumers will be able to ‘share’ packs of McVitie’s Chocolate Digestives with those they love via a Twitter campaign using redeemable voucher codes.

Caroline Hipperson, chief marketing officer at pladis UK&I, says: “Now, more than ever, it’s so important to find time to share moments with those around us and find little, meaningful ways to connect.McVitie’s has been connecting people through biscuits for over 18 decades, and we wanted to celebrate the fantastic McVitie’s taste – which has made McVitie's chocolate Digestives the Nation's Favourite - the unique magic of the brand which has always been able to bring people together, no matter what else might be going on inthe world.”

Andy Jex, chief creative officer, TBWA\London,says: “The compulsion to share something really good is a natural human instinct. Doing soregardless of consequence opens up an idea for McVitie’s that feels right, fun and enduring.”

The McVitie’s masterbrand relaunch campaign was created by TBWA’s Ben Brazier & Johnny Ruthven, with social direction by Henry Hitchcox. The spots were directed by Max Weiland through Somesuch and media was planned and bought by Manning Gottlieb OMD.