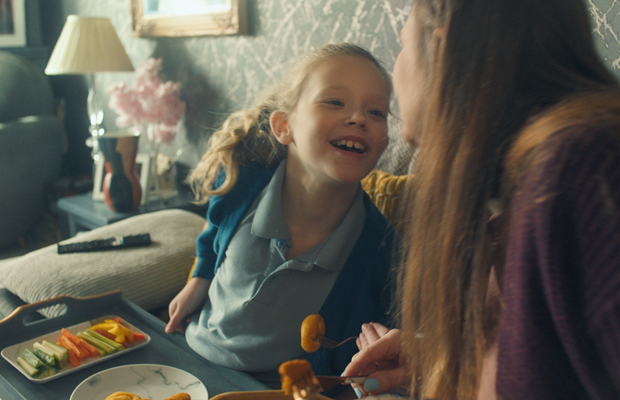 Today, McCain launches ‘Little Moments’, a nationwide campaign to drive awareness of leading childhood disability charity Family Fund, an organisation that provides grants and services to families raising disabled or seriously ill children. The grants allow the families to purchase essential items to help their day-to-day lives and spend more time together, such as during mealtimes, enabling them to take time for the little moments. The COVID-19 pandemic has severely affected these families, and the ongoing partnership between McCain and Family Fund aims to offer support and take meaningful action so families can enjoy the little  moments that matter.

The Little Moments campaign includes a primetime TV advert, featuring six real-life families from around the UK who have been helped by Family Fund. To coincide with the advert going live, McCain and Family Fund will be releasing a special report on how mealtimes for families  raising disabled children have been affected during the pandemic. Alongside this, in the coming weeks, McCain will partner with Sky and David Walliams to tell the stories of families supported by Family Fund across a series of animations.

Created by adam&eveDDB, the nationwide TV advert brings to light the little moments that mean the most to the children of the families supported by Family Fund, many of which are taken for granted by most people, such as coming together around the dinner table at teatime. The 60 second and 30 second adverts, which will be shown during primetime across UK national channels, elevate the children’s voices, highlighting favourite moments from playing music and singing, to drawing, playing with their families (or Dexter the cat!) and visiting the sea.

Mark Hodge, marketing director, at McCain, commented: “As a family-run business  we’ve always looked to make a genuine difference to British families and communities, and as  the pandemic hit, we knew we needed to step up which is why we pledged £1m to Family Fund

to help support 150,000 families raising disabled or seriously ill children. Today's campaign launch is focused on raising national awareness of Family Fund, both to highlight the great work they do in providing essential items to families in need, but also shine a spotlight on the little  moments they treasure that many of us take for granted, like coming together at mealtimes.

“We hope this campaign encourages as many people as possible to consider joining us in supporting Family Fund, in whatever way they can. By doing so, we can all provide some support to the thousands of families raising disabled or seriously ill children, not just as they get through the pandemic, but long into the future as the world gets back to some sense of normality.”

Ben Tollett, group executive creative director, at adam&eveDDB, commented: “It was a privilege to work with such an incredible charity and so many inspirational families. But the biggest thank you has to go to all the brilliant children who made this job so much fun to  do.”

Cheryl Ward, chief executive of Family Fund, said: “We’re delighted to have worked with McCain and adam&eve to bring to the screen a snapshot  into the lives of these families. This partnership provides an unprecedented opportunity for us  to create and celebrate family moments and, importantly provides a platform for the voices of disabled children, young people and their families to be heard - raising awareness, and ultimately helping Family Fund to improve family life for many more families.”

Alongside the nationwide Little Moments advert, the campaign will be complemented in the  coming weeks by an exclusive Sky Partnership with comedian and children’s author, David Walliams. Alongside this McCain and Family Fund will also be working with a range of celebrities including Christine McGuinness to discuss the impact of raising disabled or seriously ill children on mealtimes, family life and community.

The campaign is the fourth instalment of the ‘We are Family’ series which aims to champion real  life British families and re-dress the misrepresentation of families in popular culture. The new advert also follows the recently announced £1 million pledge from McCain to Family Fund, which will help support the charity’s goal to provide 150,000 grants and services per year to families raising disabled or seriously ill children.

As part of the £1 million pledge announcement, McCain launched a limited-edition run of packs  of McCain Home Chips, designed by an art competition winner Charlie Conway (10). Charlie, who has autism and a brain injury, lives in Bradford with his parents who have been supported by Family Fund over the years.