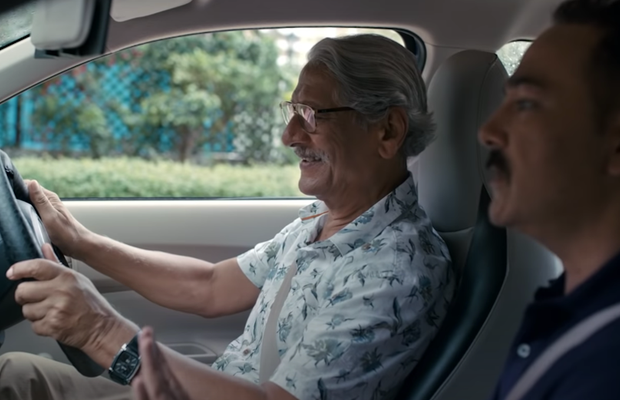 ACKO General Insurance, a purely digital insurance company, has released a campaign film on the occasion of Father’s Day. Conceived by Lowe Lintas Mumbai, the film is a light-hearted take on how the bond and care remains unchanged even though the roles change over the years.

The film opens with the father noticing a broken rear-view mirror on his car. Upon stepping inside the house to find out how it happened, he encounters his daughter who wishes him a Happy Father's Day and offers him a gift to appease him. Unimpressed, the father asks his daughter for an explanation. All this is witnessed by the grandfather who steps in to cover for his granddaughter but instead ends up blowing his own cover. This is followed by a heart-tugging, emotionally charged sequence, that shows how the care of a loved one lasts even when the roles change.

Talking about the campaign, Ashish Mishra, executive vice president – marketing, ACKO General Insurance Ltd. said: “Learning to Drive, is a big moment in anybody life’s, irrespective of the age. The ability to drive brings confidence, freedom to go anywhere and a sense of achievement. This Father’s Day we wanted to capture this spirit across generations, a father who taught his son how to ride a scooter and later in his life learns how to drive a car with his son’s help. Roles are reversed but the underlying feeling remains the same.”

Speaking about the campaign, Sagar Kapoor, CCO, Lowe Lintas said: "Care might be invisible, but it is the most evident emotion. ACKO Insurance celebrates this emotion on Father’s Day as the brand embodies care in each and every relationship it has with its consumers."

The campaign is live across the brand's online platforms.

Lowe Lintas' CCO: "How Does It Feel to Know You're Making Such an Impact on People's Lives?"

Mullen Lintas’ CCO: “It's Real Brand Work That Matters the Most”

Hershey's India Shares a Touching Ode to the Children of Lockdown