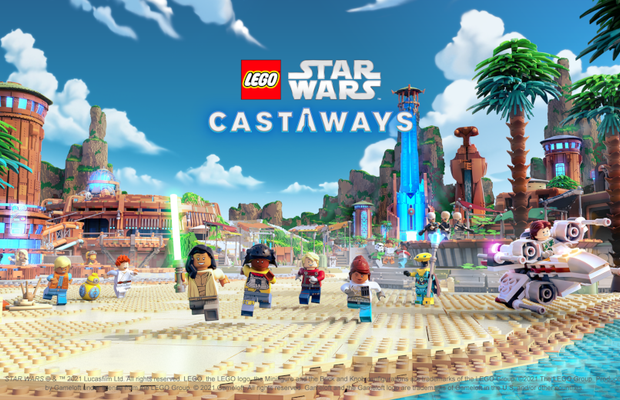 Gameloft, a leader in the creation and publishing of games, is thrilled to announce that LEGO Star Wars: Castaways is now available exclusively for Apple Arcade. LEGO Star Wars: Castaways is the latest game to launch on Apple’s popular game subscription service that offers unlimited access to a growing collection of over 200 games, all without ads or in-app purchases, and playable on iPhone, iPad, Mac and Apple TV.

Join fellow castaways at an exciting new planet where players create and customize their own character from hundreds of LEGO minifigure parts and team up with friends to explore a tropical island teeming with fellow castaways. Complete quests, meet exciting new characters in the Star Wars galaxy, hone battle skills in PvP arenas and explore mysteries surrounding the recorded archives of historical Star Wars moments.

After crash landing on a mysterious planet in the middle of a maelstrom, players find they aren’t alone in their new home. Meet-up with brand new characters and connect with other players online in a thriving social hub of activity. Between racing Microfighters, acquiring and customizing gear and challenging friends to battle in the Hippodrome, players will uncover the mystery of the corruption as it alters simulations of historical moments spanning the entire Star Wars galaxy.

Dive into moments spanning the Star Wars galaxy and explore Jabba's Palace, the maze of Echo Base on Hoth, the plazas of Mos Eisley and discover how the corruption has altered them. Players uncover a growing threat antagonising life on this special planet and join forces with up to three friends to cleanse corruption and solve puzzles! Build a team or play solo to save historical recordings spanning special moments across the Star Wars galaxy and keep them safe from the growing corruption that’s altering these historical moments.

Players create their own Star Wars experience in LEGO Star Wars: Castaways by exploring unknown environments where new and beloved locations are made entirely of LEGO bricks from the ground up. Discover an ancient settlement, gather LEGO bricks to complete quests, and connect with friends online to experience classic Star Wars moments.

“We are so excited to be launching LEGO Star Wars: Castaways today!” said Lee Kaburis, game manager, Gameloft Montreal. “This is a game built from the ground up to leverage all of the fantastic features of Apple Arcade and to bring a new corner of the Star Wars galaxy to life. This is a perfect game for kids and families to play together, and to create their own place in the Star Wars universe.”

Playable across iPhone, iPad, Mac, and Apple TV, the game will be available exclusively on Apple Arcade for a low monthly subscription of $4.99 with a one-month free trial that offers unlimited access to a growing collection of over 200 premium games — featuring new releases, award winners, and beloved favourites from the App Store. Apple Arcade is also part of the Apple One Individual ($14.95), Family ($19.95), and Premier ($29.95) monthly plans, with a one-month free trial.*

Perspectives of Luxury and Gaming: A Talk with Gameloft's Casey Campbell