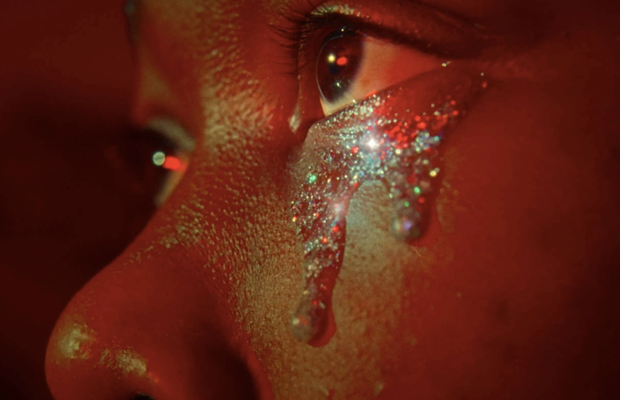 MOON is a surreal short film written and directed by Luke Casey and features rising British musician Brian Nasty, whose music is used as the soundtrack. As a demented moon wreaks havoc and destruction outside, the London-born rapper and producer stars as a lone restaurant guest who continues to eat and drink while he waits out the end of the world.
It’s weird and a bit silly, but certainly not thoughtless. In fact, there’s so much to dig into that LBB’s Alex Reeves couldn’t resist catching up with Luke to find out more about how it came together.

LBB> The film started after you spoke to Brian on Instagram. Is that right? How did that conversation spark up and what did you discuss at first?

Luke> Yes that's right. Brian DM'd me as he had seen a music video I made in Japan in 2019. He and I both really love Japanese culture so we started chatting about that. Brian has a great idea for a short film he wants to shoot in Tokyo so that's where the discussion began. I had already written MOON and I just threw out the idea that he act as the main character and he said yes. We started building on it from there together.

LBB> What attracted you to working with Brian?

Luke> I think Brian has a genuinely unique look and angle on things and his music sounds super original. A lot of it is rooted in this tension between childish innocence but there being something darker underlying it which I really relate to, for example he uses toy instruments but then layers it with quite heavy beats and his lyrics will go from seemingly sweet to quite nasty all of a sudden. He has an energy that I really like and is pursuing something that feels really unique. I also think it's cool that music is just one part of his wider practice and he isn't restricted to one art form. He is also just a very lovely guy.

LBB> It's a short film but also part music video. Why did you settle on doing it this way rather than as a whole promo for one of Brian's tracks?

Luke> Brian and I discussed him doing the score for the film. He had already written 'So Bright' and we felt the song worked really well for the final, cute moon moment. I also think it's nice to make things that don't really fit into one category or the other. I think I have some slight issues with labels and boxes so it's nice to make something that sits between realms and is hard to place. Brian and I are both about trying new things out.

LBB> Where did the concept for the film come from? I read that the moon is a nod to The Legend of Zelda.

Luke> The thing that sparked the idea was actually a picture my friend posted of Goofy sat alone in a big banquet hall. I found myself wondering why is Goofy all alone at this party and then I just started writing from there. And yes the moon itself was heavily influenced by The Legend of Zelda: Majora's Mask. In the game you have about four days to finish everything before this giant moon crashes into Earth. It's actually a really stressful / anxiety inducing game. I'm someone who is quite sensitive to time. The movement of it, losing it, the passing of it, the expanse of it etc., so that game had a big impact on me - as did the start of the pandemic. I suddenly had a lot of time on my hands but it also felt like something was crashing in on me. I remember ingesting a lot of news through my phone about the pandemic and general state of the world and feeling very stressed and losing sense of what was true and what wasn't. The film was about that sense of anxiety I guess.

LBB> There are loads of fun little details, how did those ideas come about?

Luke> Yes! We shot it during the second lockdown [November 5th - December 2nd 2020, in the UK]. The film industry was on pause somewhat and we had time to explore and play without much pressure. The ideas came from everyone involved. I knew I wanted tears but Brian suggested we make it glittered. Danny Hyland who did the set came up with the little moon arms idea. It was an opportunity for all of us to have some fun and mess about. It was also nice to build the sets instead of relying too heavily on digital effects. I was swinging a miniature moon across the little town and the moon singing moment at the end was Claymation. People keep asking what the meaning behind the lychees is, but some secrets are better kept.

LBB> What were the big challenges in making it and how did you overcome them?

Luke> I have to say I had an amazing producer and team on it who made it a really lovely and easy project. There were a few usual hiccups but overall it was just fun and easy.

LBB> What was the day of the shoot like?

Luke> It was the first time I actually met Brian! We had only really chatted on IG and then suddenly it was the shoot day and we met in person. It felt like I'd known him ages though. At the start of the shoot I was super nervous and there were a few decisions I needed to make but most things were already in place so it was more a case of just letting it all happen and unfold.

LBB> What sort of collaboration would you most love to do with Brian Nasty in the future?

Luke> I think it would be really nice if we can make the Tokyo film together. He's been working his butt off trying to secure some funding for it so hopefully something will come of that. Music videos would be fun. I imagine we will keep collaborating together for a long time into the future.