The director of Shaun of the Dead, Hot Fuzz and The World’s End discusses his move away from comedy for psychological horror Last Night In Soho 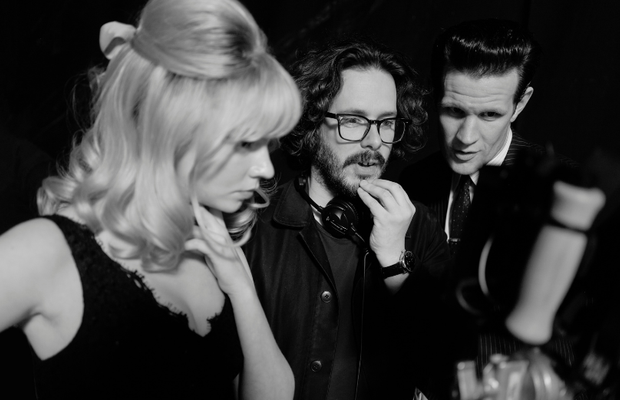 Photo Credit: Greg Williams for Universal Pictures
Best known for comedy hits such as Shaun of the Dead, Hot Fuzz, The World’s End and Scott Pilgrim vs The World as well as action thriller Baby Driver, director Edgar Wright is much celebrated for his fast-paced satirical films. But his latest release takes on a much darker tone, drawing on elements from his own life for inspiration to form psychological horror Last Night In Soho.
Starring Thomasin McKenzie, Anya Taylor-Joy, Matt Smith, Terence Stamp and the late Dame Diana Rigg in her final role, the film follows the story of Eloise, an aspiring fashion designer with a strange sixth sense that allows her to transport back in time to the 1960s. Here she finds herself in the body of an up-and-coming singer with a glamorous life - but, as past and present worlds begin to collide, the consequences are horrifying.
Speaking with LBB’s Sunna Coleman, Edgar Wright reveals how real life experiences helped shape this twisted tale and what it was like stepping away from the world of comedy.

LBB> Last Night In Soho is a psychological thriller set between the modern day and the 1960s. What was your inspiration and creative vision behind this story?

Edgar Wright> This film has been the amalgamation of a number of things that have inspired me in life over the years. It might not seem that way from the subject matter, but it’s quite a personal movie in a lot of ways. It incorporates so many things that I'm either obsessed with or have had happen to me or people I know. Part of it is an obsession with the '60s which came from when I was very young, listening to my parents’ record collection in a pre internet age.
But a lot of it is inspired by elements of my life. The film follows the story of aspiring fashion designer Eloise who moves from the country to London - much like I did many years ago. Much like my co-writer Krysty Wilson Cairns did, and much like my sister in law did when she moved to London after studying fashion.
In terms of the psychological horror, my mum herself would say she is quite supernaturally switched on, able to feel presences in buildings. So all of those different moments - combined with working in Soho for the last 27 years - has resulted in this movie.

LBB> As an amalgamation of all these different influences in your life, when did the idea for a film like this first spark?

Edgar> I would say it was more than 10 years ago from spending a lot of time in Soho. Working in film and TV production, you tend to do really long hours, so I've walked the streets of Soho late at night too many times. And I'm a man walking around on my own, so I can't even imagine what it would be like for a woman - maybe you would choose not to do it full stop. But it's definitely an interesting shift in energy after midnight. If you work in the area you’ll know what I’m talking about.
A place that's fun and social, suddenly becomes quite nervy, taking on this dark energy. And the later at night it gets, the more you feel it. There’s definitely a change of chemistry in the air. And I’m one of those people that can’t walk around a city and not think about it’s past; both the good side of its cultural history but also the darker side and its shadows of the past that loom very large.

LBB> You co-wrote the script with Krysty Wilson Cairns - tell us a little bit about your creative process and how you collaborated?

Edgar> I had already written the story but the first thing I did after that was work with a researcher like I did before The World’s End. I hired a brilliant researcher called Lucy Pardee - she’s a BAFTA winner as a casting director for Rocks (2019). She researched elements of the story in great detail including lots of testimonials from people who lived and worked in Soho in the 60s and people who live and work in Soho now, like students coming to work here for the first time.
And then Krysty came on board a bit later. I actually met her through our mutual friend Sam Mendes who thought we would get on like a house on fire. And when we met, we did get on like a house on fire. She happened to mention that when she was an aspiring screenwriter, she had worked as a barmaid in The Toucan in Soho for five years, and had lived around the corner on Dean Street. That’s when I told her my idea for the movie as I just wanted to see what she thought of it as somebody who had lived there. Luckily she really loved it and reacted really favourably to it.
About a year later, after I’d finished doing press for Baby Driver, I was thinking about writing the screenplay for Last Night In Soho. But I felt like I should try writing it with somebody else, so I called Krysty from LA and asked her if she was up for it, which she was! So I flew back to London and we started working on it immediately. 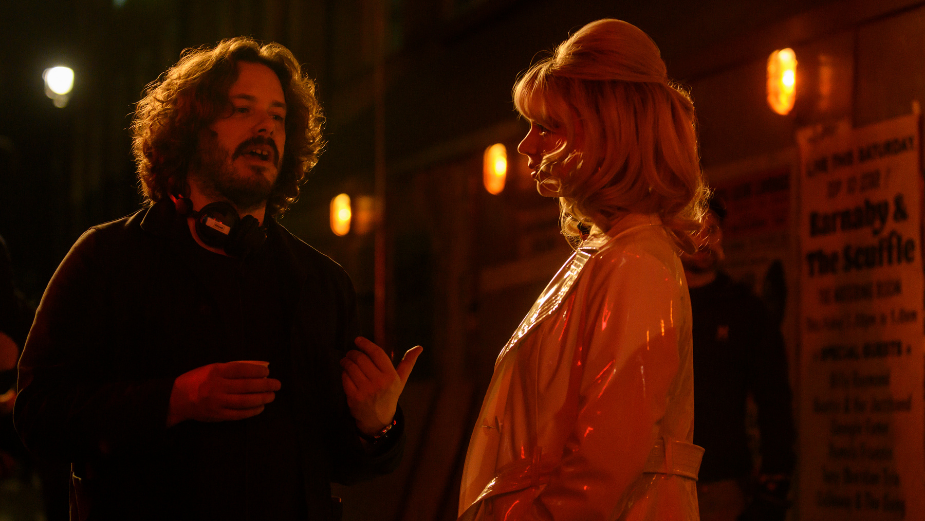 LBB> The film is quite dark, and some would describe it as a step away from some of your other films. Would you agree?

Edgar> It’s definitely darker than the other movies for sure, although I guess Shaun of the Dead killed his own mother so that’s pretty dark... But Last Night In Soho is not comedic in any way like Shaun, Hot Fuzz, Scott Pilgrim and World’s End. Baby Driver was more of an action thriller but it does have funny moments in it. And then this film is more of a psychological thriller.

LBB> How did you find working on this compared to the more light hearted work that you've done?

Edgar> It's more difficult in that vein, because if you're dealing in any kind of dark or more disturbing material, there's an element where you kind of feel like it's more difficult to leave at work - the film itself haunts you. And the only way of exercising that is to make the movie. In a strange way, because I've continued living near Soho since it finished, I feel like I haven't escaped the movie yet. I can even see one of the major locations from my window so I feel like I am still in the movie.

LBB> The film was a hybrid production, shooting on both celluloid film and digital. What were some of the creative and technical elements that led to that decision?

Edgar> It was purely a practical decision and a way of saving money. Also we were shooting in the middle of summer when the nights are shorter and shooting digital is a lot quicker, which helped us utilise the time well. The blend between the two is pretty seamless anyway so we shot on a number of formats: spherical, anamorphic and 35mm, with night exteriors shot on digital.
But I think I would have shot the entire thing on film if I could - around 75% of it is on film. The digital aspect was purely on a practical level due to the amount of night exteriors we had to do. It would take up too much of the budget to have to light it all correctly for film when a digital camera is able to pick it up without lighting.

LBB> Have you done many hybrid films before?

Edgar> We did a similar thing on Baby Driver which, for the most part, is on 35 mm. And there are a couple of key nighttime exterior scenes that we shot on digital for the same reason.

LBB> You collaborated with Cinelab Film & Digital for the film and digital dailies - what was your experience like working with them?

Edgar> It was great - a very easy and reliable pipeline. I don't tend to watch a lot of dailies back myself anymore as it can be time consuming. I focus more on what needs to happen the next day but sometimes I like to watch them back if there was a particularly interesting technique we used and I want to see how it turned out. 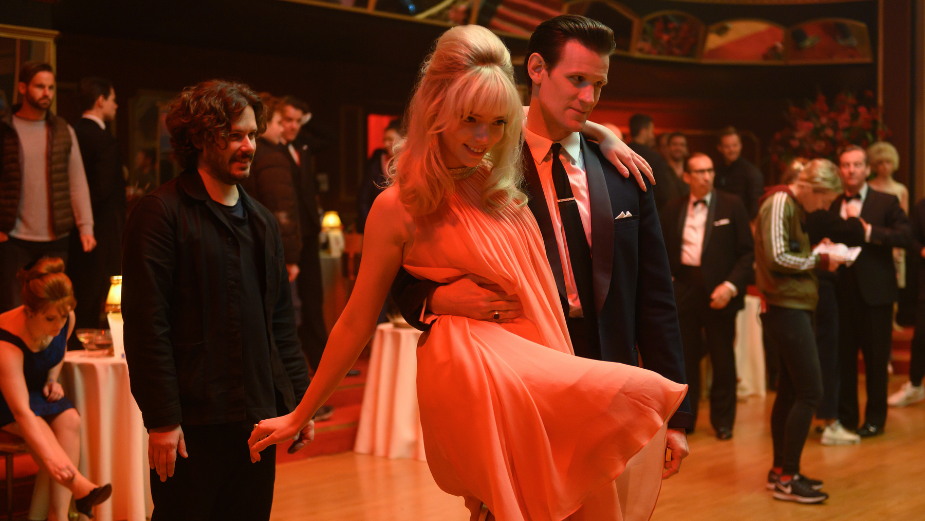 LBB> And what were some of the challenges that you faced as director on this film and what solutions did you come up with?

Edgar> My issues are usually problems of my own making - like deciding to do things in a very complicated way. For example, outside Eloise’s bedroom is this tricolour light that goes from blue to white to red on repeat. And then once you get into a sequence you have to keep lighting continuity, so me and Paul Machliss would be having to edit the scene during shooting to ensure that continuity.
The other big challenge was shooting on location in Central London. Because Soho is not an area that stops for anybody. Sometimes we had road closures which had to be organised three months in advance. But even if you have road closures, or even if you've dressed a scene with period cars and period extras, you still have to keep the public at bay, and we kept having to ask them nicely not to walk through the shot. Every shot in central London was a white knuckle ride. I'm very proud of the end result but it was very challenging.

LBB> Finally, what were your personal highlights and favourite moments from filming?

Edgar> I guess there are a lot of shots in the movie that were very complicated in their choreography but are essentially happening for real - like a lot of the mirror stuff and the dance sequences. But when you achieve a take where it works, that's a really good feeling. Even just on the monitor when you're watching it back is a good feeling.