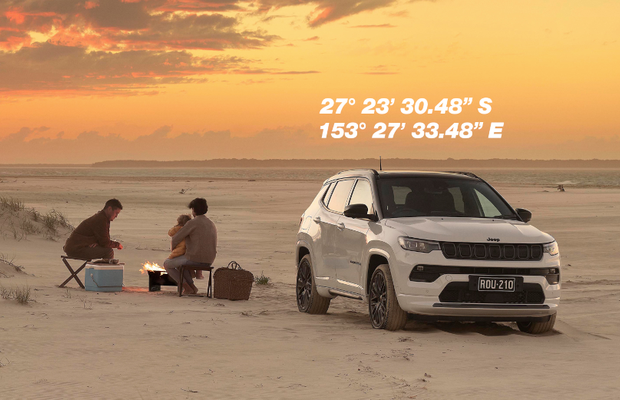 What’s the most important feature in your car?

For Jeep drivers, the answer is always the same.

Which is why, to launch the new Jeep Compass in Australia, Jeep and Cummins&Partners decided to focus less on its futuristic, yet familiar SUV features – and more on the unfamiliar places it can take you.

Launched last week, the serene, minimalist campaign features the GPS coordinates of real Australian locations, all of which can be accessed using the genuine 4x4 capability of the Jeep Compass.

“When we looked at compact SUV advertising, we noticed a lot of the same features, music tracks and scenarios being played out ad nauseum. So we decided in order to be distinctive, we’d bring viewers into a true, realistic moment of escapism that no other car in this category can provide”

Tom Noble, chief marketing officer Jeep Australia said: “The Jeep Compass has come along leaps and bounds in its technology, interior and connectivity. But underneath all that, it’s still a Jeep – which means it does more than get you from A to B. It gets you to places where you really want to be.”

The campaign will roll out over the next two months on TV and Online. Jeep Compass drivers will also have the chance to upload their favourite spots to social media, using a special tool that calculates their exact coordinates – allowing other Jeep drivers to recreate their adventures.

Libra Wants You to 'Wear. Bleed. Wash. Repeat.' in Campaign from Cummins&Partners