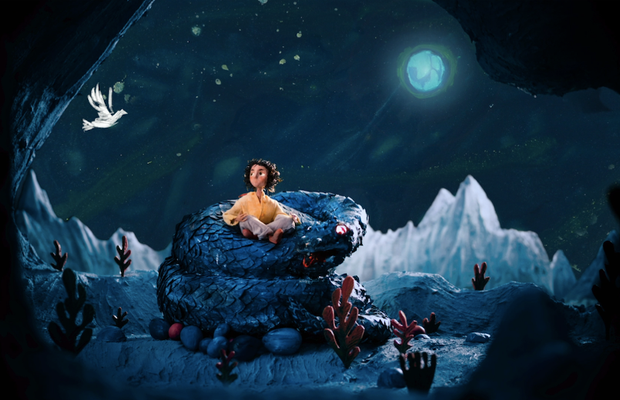 Following the release of critically acclaimed new album ‘Earth To Dora’, EELS return with a stop-motion animated music video for the album’s title track. The video arrives just before Earth Day, and is directed by PRETTYBIRD director Isabel Garrett, executive produced by Juliette Larthe and produced by Chris Murdoch of PRETTYBIRD with DoP Daniel Morgan.

The music video finds Dora stranded on the moon, surrounded by otherworldly sadness and surreal depictions of misery, and it's up to E to convince her it's time to come back down to Earth. Immortalised in paint by award-winning Welsh director Isabel Garrett, E and Dora's story plays out across a mystical stop-motion animation tale of friendship and support.

Director Isabel Garrett writes: "The song is about E trying to cheer up an old friend over text. There’s something magical and otherworldly about the lyrics that made me think of Dora being stuck on another planet, surrounded by misery and needing a route home. For me the song is about the distance that depression creates and the beauty of companionship. I liked the idea of mixing paint with stop motion to make a world which is a bit playful and nostalgic with lots of handmade texture to capture the sensitivity of the lyrics."

E says: “Earth to Dora. Come in, Dora. Did you know tomorrow is Earth Day? Come down to Earth and celebrate with us.”

Isabel Garrett is an alumna of the National Film and Television School and artist in residence at Alexander McQueen’s Sarabande Foundation, where she made the ‘Earth to Dora’ music video. For ‘Earth to Dora’, Garrett used a stop motion animation process, mixed with paintings by two brilliant animators David Mcshane and Renee Zhan.

Garrett explains: “David Mcshane also animated most of the video, and it took about three weeks to animate all the stop motion. It's the old-fashioned way of animating the puppets frame-by-frame, and  the average is about 10 seconds of animation per day. The paint is gouache on glass, which is also a traditional animation technique, but we shot it on green screen so it could be composited into the stop motion world.”

About signing with PRETTYBIRD, Garrett said: PRETTYBIRD has such a brilliant energy. They’re champions of interesting, bold and unconventional ideas. This approach and the totally wonderful team at PrettyBird means the work they produce is always exciting and surprising, covering everything from important and moving narratives to the most absurd humour with complete confidence. They approached me with such an understanding of my work and sensibilities, as well as  a genuine interest in the world of animation and the potential it has. I knew straight away that PRETTYBIRD is the right place for me, and it’s a privilege to be joining such an amazing rosta of  directors. I’m also super excited to be releasing our first project together, a music video for Eels, which has been a dream to work on- it’s a beautiful track which leant itself perfectly to animation.”

Juliette Larthe, PRETTYBIRD UK co-founder and executive producer commented: “I’m so happy that Isabel has joined the PRETTYBIRD UK director roster. Isabel’s unique stop-motion  animation technique, mixed with painterly elements and an ethereal sensibility, her innate humour and magical way she expresses emotion with her character stole my heart when I saw her work, and I’m delighted we are now working together.”