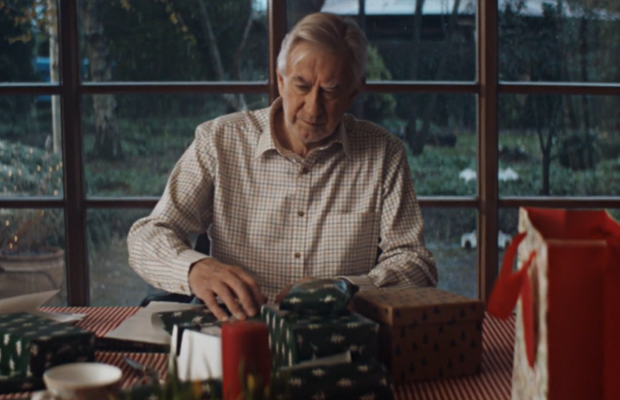 Just off of Grafton Street on South Anne Street, Dublin’s iconic shopping district, you will find Monaghan’s Cashmere. Established 61 years ago by the now 96-year-old Tom Monaghan, the luxury knitwear and Cashmere specialist is one of Ireland’s longest-serving retailers, with three generations of family having worked there. In its lifetime, the business has weathered three recessions and most recently, the Covid-19 crisis - which forced the store to close its doors for the very first time. Usually serving customers visiting Dublin from around the world, lockdowns and travel restrictions meant the long-standing establishment has faced unprecedented challenges through the past year and a half.

Now, the retailer is launching it’s first-ever Christmas campaign, produced by Banjoman Films, as it works to bounce back from this extremely tough period. Creatively devised and directed by Dermot Malone, the film moves away from the standard festive formula with a touching story inspired by Tom Monaghan himself.

The film, which stars legendary Irish theatre actor Barry McGovern (Braveheart, The Tudors, Game of Thrones), follows an elderly man experiencing his first Christmas since his wife passed away. Living on a farm with just his beloved horse for company, he frequently has flashbacks to his late wife at various stages in their life. When his family arrives for Christmas, he struggles to share in their festive spirit, especially when his young granddaughter breaks a picture frame holding a photo of his wife, himself, and their horse. Unbeknownst to her Grandfather, however, the Granddaughter takes notice of the red cable jumper he was wearing in the picture, and when mischievously rifling through his belongings, finds it. Struggling with the emotions and past memories of his wife on Christmas Day, the protagonist goes to visit his horse in the stable - only to discover his granddaughter has left him a special gift in the horse box.

Celebrated for their impactful, storyful Christmas films, Banjoman recently picked up Production Company of the Year at Kinsale Ireland - including three Gold and one Silver Shark for RTÉ’s 2020 ad for the Late Late Toy Show, ‘Let’s Make Christmas’. This win was in fact a catalyst for the project with Monaghan’s Cashmere. Director Dermot Malone wanted to find an Irish brand that had been hit hard by the lack of tourism and footfall in Dublin as a result of Coronavirus. Having been a big fan of Monaghan’s Cashmere throughout his life, Dermot approached Suzanne about creating the spot in a bid to drive more footfall this Christmas.

Dermot Malone comments: “Monaghan’s Cashmere is an iconic shop for me. My dad shops there, and my own grandad - it’s just always been there off Grafton Street. Tom is a legend around the place. He’s 96 but he goes into the shop every single day without fail. In the midst of big brand names and international Christmas campaigns, we just wanted to pay tribute to one of Ireland’s most iconic family owned establishments, in a unique authentic way. We also owe massive thanks to the teams at MPC London, in particular Dafydd Upsdell, another friend of the brand, Mathieu Toullet on colour and Michael MacLennan, who gave us the track.”

Having worked on a series of Christmas films for other Irish brands including Homestore + More, RTÉ, Brown Thomas, An Post and Gala, Banjoman has always looked to play a part in the Irish advertising festive season. Instead of playing into traditional themes of joyful celebration and indulgence, Dermot Malone worked to craft a story that reassured those suffering with grief that life can surprise you, and there will always be people that love and care for you. Intentionally the film has no on-location sound or VO but is instead soundtracked with Michael MacLennan’s ‘Only Love Can Do That’.

The campaign will not only debut on social media, but will screen in Monaghan Cashmere’s shop window on 1st December 2021 - which will be the first time Tom Monaghan sees the finished film.

Tom Monaghan, founder of Monaghan’s Cashmere, comments: “Having not seen the piece myself as of yet, but having had the story read to me by my daughter Suzanne, I am very excited to see it all come to life, even with very little eyesight! I feel like a child waiting for Santa Claus to arrive.”

Suzanne Monaghan, creative director and designer of Suzie Monaghan Cashmere, adds: “We are so proud and appreciative to have been asked to be a part of such a beautiful heartfelt production by such a widely acclaimed, award winning filmmaker.  Knowing Dermot and his family as customers and friends for many, many years I had total trust in his vision in telling a story based on our dads, of loss, love, empathy, hope and longevity. It’s a story I feel is relatable universally, especially in the current climate.  Everything about making this piece was a joy, from every single person at Banjoman, the legendary Barry McGovern, the adorable Daisy Lyons and the incredible soulful music of singer, songwriter Michael MacLennan. Including family members and friends as extras was the icing on the cake for me. I cannot wait to share but should advise to have tissues in hand! I will never forget it and be forever grateful to everyone involved in this short film based on the most wonderful man in the world!”