Inside the Jury Zoom 2021: The Immortal Awards’ European Magnificent 7

Jurors from various nations came together to vote on work from across the continent, as LBB’s Alex Reeves reports from the digital deliberations 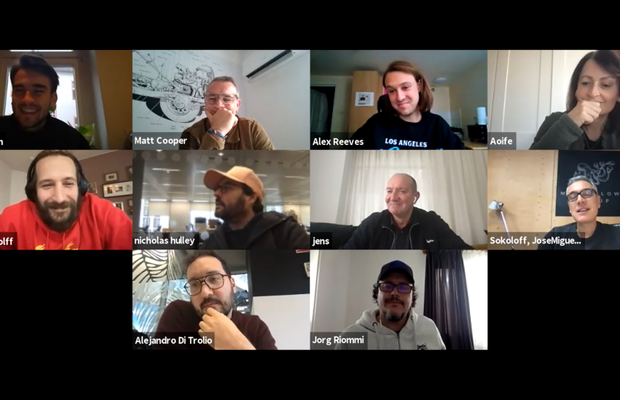 Seven pieces of work from the Europe region are through to the final global round of judging for The Immortal Awards, hosted in partnership with global partners Nice Shoes and regional partners CHEAT.
That number is the result of entries from across the continent being whittled down to a shortlist of 23 by dedicated local juries for the UK, Ireland and Germany, as well as the top scoring pieces from other countries in the region and three Grand Prix winners from Golden Drum. A jury representing several countries convened on Thursday of last week to decide which of the 23 deserved a place in the final round.
The Europe regional jury was: Jorg Riommi (Chief Creative Officer, Publicis CEE), Jens Mortier (Partner and CEO, MortierBrigade), Alejandro Di Trolio (Executive Creative Director, Cheil Spain), Jose Miguel Sokoloff (Global President, MullenLowe Group Creative Council), Nicholas Hulley (Executive Creative Director, AMV BBDO), Ricardo Wolff (Executive Creative Director, Innocean Berlin), and Carol Lambert (Creative Director, Publicis Dublin).
Europe is a complex and varied collection of countries and the work that the jury picked to represent the continent also spans a great range. On one end of the spectrum is the totally captivating piece of film advertising that is Channel 4’s trailer for its Paralympics coverage, ‘Super. Human.’ But the work that went through ranged from that to outdoor advertising, an all-in product demonstration that saw Renault replace all the cars in a remote French village with electric vehicles, and even a real application for the Finnish town Salla to host the summer Olympic games.
The debate was robust, although ultimately the jury knew what putting work through to the final round of the Immortal Awards called for. As Innocean Berlin’s Ricardo says: “When it comes to conversations, I believe the unspoken common agreement we achieved was: in 20 years from now, will we be happy with the selected work? Then judging became easy.”
One piece of work stood out. Although it might not be something you’d expect to get to this stage of a creative award show - the totally off-the-wall music video for ‘Mesmerize’ by Duck Sauce. For Ricardo, it was in a class of its own. “Maybe because I already knew most of the other Finalists, maybe because it's a masterclass in editing, maybe 'cause it just keeps on getting weirder and weirder and you can't get your eyes off the screen. Lots of maybes, but for one thing's for sure: it's the only work I instantly felt the need to share with my friends. And that's usually a good sign.”
The full list of Finalists is: Channel 4 Paralympics ‘Super. Human.’ (UK); Duck Sauce ‘Mesmerize’ (UK); Heineken ‘Shutter Ads’ (Italy); Propuesta Civica ‘#StillSpeakingUp DeepTruth’ (Latvia); CoorDown, ‘World Down Syndrome Day:The Hiring Chain’ (Italy); Renault, ‘Appy, Electric Village’ (France); House of Lapland ‘Salla 2032’ (Finland). Check them all out here.
The final, global round of judging will then take place on Thursday 18th November, in which all regional Finalists will compete for an Immortal Award or Commendation status.

More from The Immortal Awards

7 European Contenders for The Immortal Awards 2021