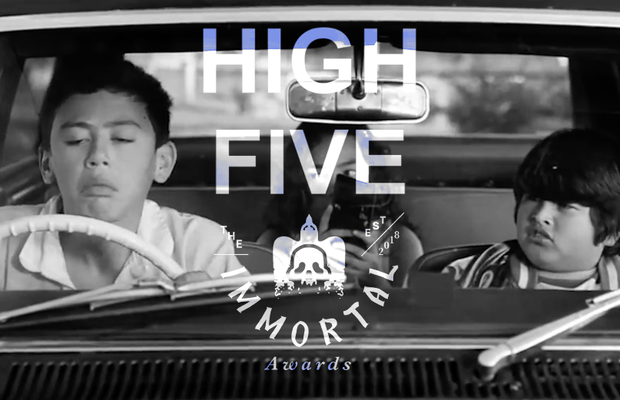 The title of Immortal - in this business - is one that is hard-earned. So many different things need to come together in the right way for a piece of work to rise above the rest and remain in the public consciousness long after the campaign has ended. Australia and New Zealand has a wealth of amazing creatives working in the industry, and it’s always hard to choose your favourite among such a crowded field of excellent people with great ideas and skills. Over the years, our region has created some truly memorable campaigns, executions and TVCs, but only a select few really deserve the title of 'immortal'. For me, I always come at the question with craft in mind, and I really love the bravery of unleashing new technology and new solutions to the work, creating a visual execution that pushes the boundaries and creates something never seen before. In the end, these five campaigns have stuck with me over the years, and of course have been recognised at craft festivals around the world...

Agency: BMF
Production: EXIT Films
Director: Garth Davis
This one is special for a lot of reasons. A killer idea, great cinematography and a world-class director, and also - it was the very first job Alt.vfx ever did. Looking back on it now, I’m just so thankful for the awesome client relationships across the brand, agency and production that took a risk believing in us to bring this idea to life with photo-real CG deer. A lot of sleepless nights, a lot of hard work and a whole bucketload of determination resulted in this TVC that went around the world and won us every award under the sun, including a Cannes Lion. It put us on the map internationally and allowed us to grow into the company we are today.

Agency: VMLY&R Melbourne
Production Co: EXIT Films
Director: Garth Davis
VMLY&R developed a master brand communications strategy to remind people of the indefinable properties of 'Schweppervescence' and its positive effect on feeling and emotion. I love the beautiful simplicity of this spot. I believe it was the first TV commercial ever shot on the ultra slow-motion Phantom camera, by our old friend Garth Davis. To me, it’s visual poetry, with every frame an evolving painting that really hooks the viewer as it evolves. A really great brand campaign. From this strategy, the 'Burst' campaign was born with multiple film-based executions forming the bulk of the campaign.

Agency: VMLY&R Melbourne
Production: PLAZA
Director: Paul Middleditch
It’s the 'Big Ad' - one of the most memorable TVCs ever and one you only need to watch once to remember. The lyrics to the ad goes:
"It's a big ad. Very big ad. It's a big ad we're in. It's a big ad. My God it's big! Can't believe how big it is! It's a big ad! For Carlton Draught! It's just so freaking HUGE! It's a big ad! Expensive ad! This ad better sell some bloo-oo-oo-oody beer."
It was a such a bold and big idea which also reminiscent of the grandiose commercials pioneered by the likes of Qatas and British Airways. Also, it was one of the first times crowd simulations were used in a TV commercial in Australia using Massive software, it parodies the visual style of battle sequences in such films as the 'Lord of the Rings' trilogy with sweeping, larger-than-life panoramas of rugged mountain terrain. It’s been voted as Australia’s number one in the top ten most popular ads ever - and little wonder. Just one of those pieces of work that is so original and striking that it stands out and stays in people’s minds.

Agency: Clemenger BBDO Melbourne
Creative Chairman: James McGrath
Executive Creative Director: Ant Keogh
Creative Directors: Stephen de Wolf and Evan Roberts
A truly great idea and execution, and something that can’t be forgotten once it’s been seen! Meet Graham, an interactive lifelike sculpture demonstrating human vulnerability, who was created by respected Melbourne artist, Patricia Piccinini, who was briefed by a leading trauma surgeon and a crash investigation expert on what bodily features that might be present in humans if they had evolved to withstand the forces involved in crashes. It was experiential, it was viral, and it’s little wonder it won so many awards that year. One of the year’s best.

Agency: Clemenger BBDO
Production: Curious Films
Director: Taika Waititi
Simple, funny and very memorable. A signature comedic style by director, Taika Waititi, one that really echoes his Oscar-nominated short film ‘Two Cars, One Night’. In this spot, Three Maori boys find themselves in a situation familiar to most kids growing up in New Zealand - sitting outside in the car, waiting for one of their dads to come out and drive one of them home. The only thing is, the dad has been blazing, and the kids know it. We watch them change from comical to contemplative, as they examine their own awareness of their dads' behaviour in the raucous, imaginative way only young boys can.

Alt.vfx Brings On Eyvonne Carfora as Executive Producer in Melbourne

How Do We Keep Telling Stories If We Can’t Shoot?